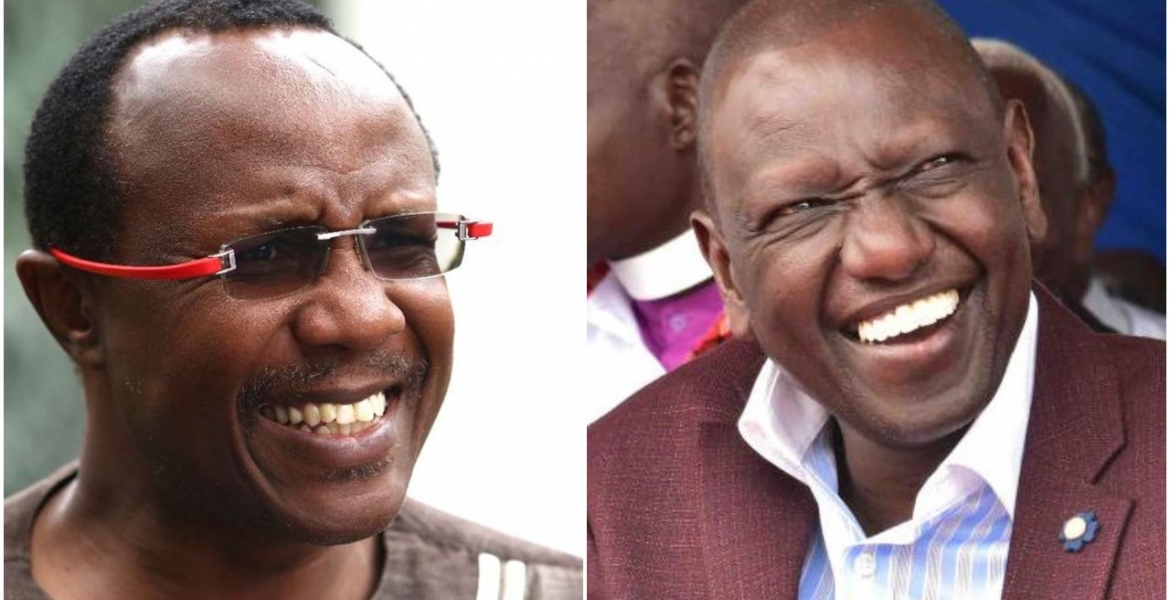 Popular economist Dr. David Ndii says Deputy President William Ruto and other leaders accused of corruption in the past should be given amnesty.

Speaking during an interview on TV47 on Monday night, Ndii noted that the war on graft has been ineffective since it has been used to target specific politicians and settle political scores.

“My position which I have articulated is that in the context of transitional justice it is time for us to talk about drawing a line between past corruptions because I don’t think we are going to be able to actually allow our institutions to fight corruption if we keep sort of having this vicious cycle of weaponizing corruption for politics,” said Ndii.

He continued: “I am for an amnesty on past corruption on everyone including Ruto and everybody. If we can agree on that then we can talk about potential for cooperating on elections.”

Ndii was further asked to explain why he decided to join Ruto’s camp despite previously declaring that he could not work with him unless he returns Weston Hotel land, ADC Mutara Ranch, his share of the plunder, and tell Kenyans the truth about Eurobond. He also threatened to leave the country if Ruto becomes president in 2022.

He said, “This is my idea of a roadmap, that considers terms of engagement not with Ruto but what I saw as realignment. The first order of business we need to do is to agree to defend the Constitution and democracy. The second common ground is that we must have a free and fair election in 2022. Electoral failure undermines the economy. On those things, it doesn’t matter what somebody’s history is. I have my own history, my own baggage. We might disagree on everything else but we have some common grounds as people living in the same society.”

He added: “William Ruto is not unique. I really don’t see what the people are making a fuss about.”

Okay okay, I get it Ruto is corrupt and should be given amnesty and elected next president. What should be done to/for those killed in church in Kiambaa Prof?
Credibility out the window for Dr. Ndii.

This so called dr ndii is a foolish man! Ruto place is kimiti prison or The Hague! No immunity for a mad man! A killer, a thief, and a busker full of lies! Stop selling our country short @ndii with a mad man!

I disagree with Ndii. We must go back to 1900 and settle all corruption of the dead and the living. After that is done we set up death penalty for any new corruption from now onwards. Death penalty is the only medicine for corruption. There's no other way to a haven of peace, development and zero graft.

Go exhume the dead so you can have some meat to eat! You are one stupid idiot!

I take your best suggestion from your smart head is to insult. Congrats sheik

Ndii has a Usual been Smoking his Weed for Real; and lost his hitherto Values.

Ndii now smokes meth! He is a useless fella of no commercial value. How do Kenyans listen to brainless creatures like ndii????

Assuming the amnesty is part of truth and reconciliation may work but those mentioned should go home. Besides you can not do this if the judiciary is not empowered to handle high person's cases. Ndii has proven he thinks with his stomach first.
This is further confirmation that Arap Mashamba is as corrupt as they come.

The idiot is a hungry dog who will sell Kenya for his empty belly! What kind of economics is he and Ruto cooking here? Thievery economics? Ghee wizz, we have seen very thing in this life!

Ndii start calling for amnesty beginning with your side kick thief Ruto who is leading you in the wrong wheelbarrow economic models that will take Kenya to hell! Who taught you economics ndii?

I can’t believe that you ndii and njuguna, the former governor of the central back can be hoodwinked by a thief to support dead economic models! What is wrong with you two?

Stop acting like a dummy to gratify your personal greed to mortgage the Kenyan people! You are far much better that a stupid dummy! Give me a damn break!

Ndii is joining Ruto’s camp simply because he is greedy! He has put his material interest above the interests of the Kenyan people. Ndii does it care about Kenya! Period!

The whole time this man ndii was fooling Kenyan. He desperate to in any government. Doesn't matter if corrupt,dictator or murderer. Kenyan are left wondering who they can trust

Ndii (Dee) is an ugly sell ou F to all those who lost their loved one in 2007 because of Ruto! We are tired of fake doctors supporting those who murdered our people! He is bought and Ruto using g the blood of every body Ruto killed! Na Dee is bought with bloody money Ruto have stolen from us! Ms Dee ni Shetani msalabani!

Ndi should stick to economics.He is far from dispensing ideas for social justice.So according to him ,the few criminals who are in prison for corruption should be amnestied?
The problem in Kenya is that the well known big thieves are untouchable.If we can only be equal under the law, things would work fine.
What message would we be sending to Kenyans if we offer amnesty to these thieves?That it pays to steal?DO we really want to do that,in acountry where people are literally fighting to meet the basic human needs?

Ndii knows nothing about economics! He is a stupid fool who purports to know everything! He is just looking fir a damn job at the expense of Kenyans. Let him not fool anyone here!

Ndiii, can they all return the stolen loot first before you start talking amnesty? Surely, 30 pieces even betrayed the son of God. I am saddened by your so myopic thinking Ndii!

He is in the pocket!
Supporting thieves.

A hungry kikuyu man reasoning with his ass to mortgage other Kenyans by supporting the worst thief in the entire history of Kenya! I support Uhuru for refusing to hand over power to a cable of hungry thieves! Very ridiculous of ndii to even mention the word amnesty!

A clean slate and keep all the loot? A stolen item does not magically turn into a gift! That is a corruption gift that Kenyans cannot afford. It also sends out the wrong message that corruption is a pandemic that we are unable and unwilling to cure. If you steal an article from someone, it remains a stolen article even a thousand years later. It is not yours and will never be yours if it was never rightfully yours in the beginning.

Unfortunately truth of the matter is there was ,there is and there will be economic crime amnesty whether he says it or not. At least we get to see Ndi’s true colors.

Corruption is a pandemic in Kenya.
We cannot and we will not be able to exterminate corruption until we get to the root of it and neither can we continue with it.
There will be no amnesty for corruption!!
Dr. David Ndii, " Our Story" unlike "His Story" is very important to us. The reason our country has failed to deal with corruption is because since independence we have only learned "His Story" and not "Our Story" which in itself is a form of corruption.
No matter how long it takes, our generation is ready to go back as far as we can go to appease our forefathers who were killed and maimed and disinherited through corruption. To appease our 7 year olds who are on the streets begging (who cannot afford one meal a day) because of that corruption.
We cannot move on until we resolve the evils of the past. This will and must happen.
" An unanalysed life is not worth living".
Luckily, resolving those evils is on the horizon. We will be patient!!

Name one politician who has not grabbed money, land or property or involved in corrupt deals.

Two freaking ugly bitches hoping to steal everything from us and our country! Go to hell you freaking idiots!

Can it really get any worse than the two assholes smiling together like hungry dogs? Shenzi kabisa!

Ruto and ndii must be stopped at all costs! We will pay to stop them! Kenya is not for sale!

Education is more than having makaratasi! Ndii just prove that simple fact! He is a moron of the lowest value! A hungry man selling his country to fill his mafi belly!

Amazing the comments of hurling insults. Ndii has made his suggestion. I have made mine. Why don't you give your suggestion with decorum and stop name calling.
When has insults ever helped anyone? Raila and Trump insulted many but now they are out on the sidewalk wishing to be CEO.

Ok Angel boy! I have seen many places you have insulted others! Is this do as I say but not as you do? Don’t be silly!

Kips dont take me back to misri. I ain't boarding

Ndii speaks and eats from both sides of the mouth. When money changes hands, Ndii cannot help himself. He wants his guy forgiven do that he will have more to give. Ndii, the guy with no conscience. You are on sale!