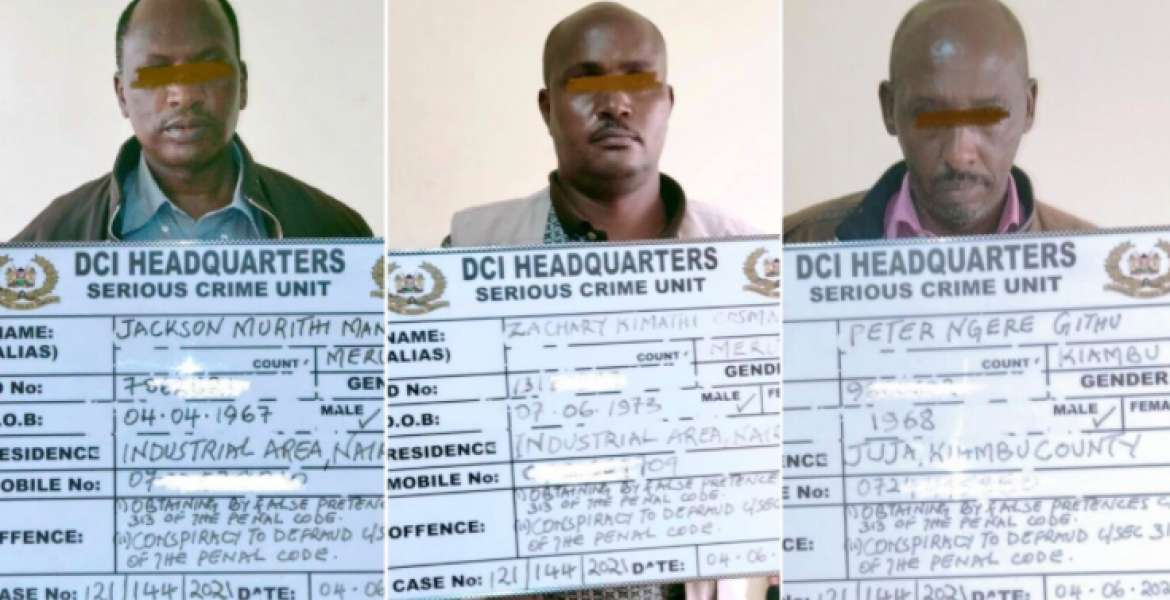 The three are believed to have been recruited by the main suspect Grace Nyamohanga to collect money from jobseekers in exchange for nonexistent jobs.

Nyamohanga, a Senior Sergeant at Lang’ata Women’s Prison, was identified as the mastermind behind the syndicate, which swindled unsuspecting jobseekers more than Sh200 million in 10 months. She surrendered herself to the Directorate of Criminal Investigations (DCI) on May 23rd.

The three will be arraigned in court on Monday alongside Nyamohanga and Masiaga Slyvester.

They will answer charges of obtaining money by false pretenses, making documents without authority, altering false documents, and conspiracy to defraud among other charges.

One of their victims, a woman from Kiambu county, was defrauded over Sh800,000.

She was promised that her three children would be offered jobs at the National Hospital Insurance Fund, Nairobi Metropolitan Services, and the Kenya Ports Authority.

In January, the suspects allegedly recruited over 60 jobseekers who were offered forged letters of appointment inviting them to join the Kenya Airports Authority (KAA).

The victims paid huge amounts of money ranging from Sh300,000 to Sh400,000 depending on one’s level of education.

They were later driven to JKIA, ostensibly to familiarize themselves with their supposed new work environment.

At the airport, they were addressed by a suspect who posed as the Human Resource Manager and later taken to a high-end facility overlooking the Nairobi National Park, where they were treated to a sumptuous meal.

“Afterwards, they were asked to go home and report on March 18th. That was the last time the victims heard from the phony thugs,” DCI said.

I bet there is a Nigerian connection behind all this