Raila Hints at Running for President in 2022, Pledges to Emulate Magufuli 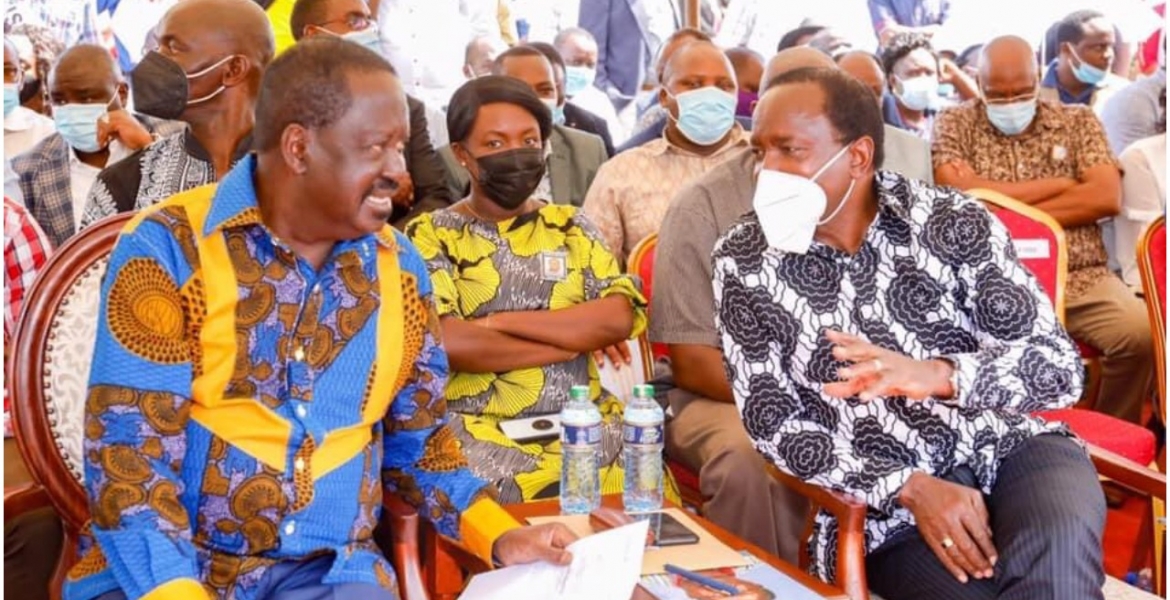 ODM leader Raila Odinga has hinted at the possibility of running for president in the 2022 general elections.

Speaking during the burial of former Kibwezi MP Kalembe Ndile on Friday, Odinga pledged to form an alliance with the Wiper party ahead of next year’s elections.

He said he is keen on teaming up with Kalonzo Musyoka to save the country from the reigns of thieves.

“Kalonzo and I will walk in the same direction to ensure we capture thieves stealing from the country,” said Raila.

Odinga stated that Muyoka and himself stand a better chance of winning the presidency if they work together again.

If elected, Odinga promised to emulate the late Tanzanian President John Pombe Magufuli as far as the fight against corruption and management of public funds is concerned.

“We have a budget of 2 trillion plus, but most of it will be stolen. We do not lack. Money is stolen. We will stop all opportunities of theft and you will see for yourselves what we can do with the little we have. Magufuli did in Tanzania in five years, we can do it too,” added Odinga.

He further took a dig at Deputy President William Ruto over the ‘hustler’ tag, saying the late Kalembe Ndile was the real definition of a hustler.

Raila argued that Ruto’s hustler campaign is meant to hoodwink Kenyans into supporting his presidential ambitions.

NO NO. Please go away and retire. My son needs a job; we cannot have the same old gizzards running the country to the ground! Enough is enough.

Well said @SimbaMkali, we can't afford recycling old corrupt and selfish politicians we need young minds with fresh ideas and interest of the country at heart. RAO and others should "hang their boots, gloves" and call it quits!

Same old formula Raila. It will not work.

Bwana Raila and your accomplices bwana what did you do with covid billionaires scandal ? All the 49 plus years in politics you have done nothing besides bullshit. You forget you were also mentioned with thefts by your own attorneys..You were bribed with handshake and you saw MPs & MCAs being paid or BBI nonsense and you said nothing. Spare us the bullshit and retire peacefully awaiting your end of time on planet earth . You can do kenya Justice by starting now anything else is noise and ujinga bwana. I would rather vote for whomever you call thieves but your family , Kenyattas and Mois have been the biggest detriment to Kenya and biggest thieves. Bure Kabisa

Drunk with power, these fools think three quarters of our national cake was baked for Odingas, Kenyattas, Water melons, Mutavatis, Koinanges, Kihikas, Nassirs, Hajjis, and other morons who always make sure they have a say and a spot in government. What lessons did we and the world learn from Magufuli? Stupidity? Moronism? Arrogance? idiotic believes? Akili kamasi? Raila will never be Kenyan president. Never!

Useless old violent empty lots of poverty will b crushed by anybody at 8am.Kenyans loves him but no enough coz of his mental backwardness n lack of ideas.He only think of himself how he will get into power either by crook or gun.Many have died n lost homes everytime he decides to run for Presidency juu he thinks he must win.We the Kikuyus haven’t forgotten on 42 against 1/madoadoa.So raila ur too old n u will b lucky to get 3m votes 2022.

Does murderer Raila know Magufuli killed nobody to win Tanzanian presidency?Muuaji Raila should arrest himself for thousands dying daily from cancer coursed by poisonous maize he imported from SA twelve years ago?He should also arrest himself first for killing 1300 Kenyans in 07/08 PEV and 350 Luos after 2017 elections.Who will he arrest for shs 4.5b KKV,shs 24b maize and shs 8b KPC petrol?Will he arrest himself,Orengo and other ODM thugs for grabbing 500000 acres of land in Lamu?

Mkenya is of opinion that Africans can only be killed by makamburu American policemen in USA.But can he explain how an American guard/watchman killed a man in MaiMahiu(13 miles from Limuru),Haven Kenya today-13th,June,2021 before an irate mob killed him(guard) on the spot?I also wish if he clarifies whether it is only an offense for a Kamburu to kill an African in US.Apart from wauaji Wanjiru,Kabogo,Raila,Joho,Murathe,Kamanda,”pastor”Ng’ang’a and Obado,who else is licensed to kill Africans in Haven Kenya?

Can muuaji Raila explain why/how he,Kalonzo and Mudavadi were illegally paid shs 1.5 retirement benefits in 2019 and continue earning retirement pension yet they are still in active politics?Imagine how many patients that money would have saved or public boreholes it would have dug or students it would have sponsored.A BLOODY REVOLUTION is the only solution to fight corruption.These elite mis-leaders must all FACE THE FIRING SQUAD fake Joseph,baba YETHU APENDE ASPENDE.

Raila running again might be a blessing to his opponent. Odinga family have been running since 1992 unsuccessfully but they never give up. Amazing competitiveness like Allen Iverson

Mr. Raila, I dont think Uhuru is that dumb.If you truly have ideas that would eradicate corruption,why not share with him.Especially after the handshake. That's what atrue patriot does. And if Uhuru refuses these "good' ideas you have,hey just go to wananchi,and tell them.
You cannot just sit and wait for the country to sink when you have saving ideas,right?
BTW,did you do anything with the PM powers that were bestowed on you?
For Kenya to advance,and maximize its human potential, we need new thinkers, new ideas,new politicians,and above all, leaders committed to the betterment of the country.And RAO is not one of them.

Useless old folks who have stolen from Kenya for ages poor governments. You ROA you ate molasses plant and much more. Kisumu very poor you are recycled politicians. Kenya needs young blood but with your leadership .Munguffuri was a conman he killed politicians and tunajua alikufa kwa covid 19 yet wanafisha - is this the guy you are emulating even now politicians are in exile from Tanzania are in Europe and Canada. Shame with kalonzo go home .We fed up of you . Mafi ya panda na kuku na haha fisi .Kenya huko .

It's a strategy. Raila is running for president to prevent any other person to rise in opposition. While Kenyans fight the queer bedfellows- Raila and whoever he'll be contending with, run the country to its knees promoting the same kinds of Ills and corruption since 1963. I used to be a Raila Supporter in words and deed. Now I know that Raila Odinga is the BIGGEST ENEMY OF KENYA!

"If elected, Odinga promised to emulate the late Tanzanian President John Pombe Magufuli" as far as the fight against corruption and management of public funds is concerned.

Raila has just dug his grave emulating Magufuli means dictatorship swamping corruption from the current thieves to himself
WHO IS GOING TO MAKE RAILA & KALONZO president/deputy ?? fellow Kenyans this is the time to stop Raila He is no good for Kenya ni mukosa musimamo and easy to be compromised .It is the Kenyans that would face the music not Raila 'NO RAILA/

Yep, you said it," Mukosa Musimamo". I remember him saying that he would not run for presidency come 2022. Like Nelson Mandela said, a person who flip flops on his positions cannot be trusted to lead a people. Mandela also said he would only serve one term,and he did. Atrue principled man.A leader.

Who told these old old Kenyans men that the future only belongs to them must have been drunk from the worst poison ever to exist!

There comes a time when a man has to hand over the work to the youth! Does raila really believe he can be an effective president at his current age!?

Unfortunately Raila has never trained anyone to take over from him because he is very selfish. Africans have a very bad tendency of living in the past. And raila is not exemption.

Raila wants it all for himself and nothing else matters! It is all about raila and not the country!

OLD DOGS CANNOT LEARN NEW TRICKS . ALL THE CURRENT PRESIDENTIAL DREAMERS ARE OLD DOGS . Free kenya with a devil we don't know for the ones we know we know very well that nothing will change corruption, inequality , favoritism, tribal practices etc . kenyans let us look for a new devil these contenders are a risk to democracy to freedom of speech and choice . pls let us safe Kenya for our children if not for us