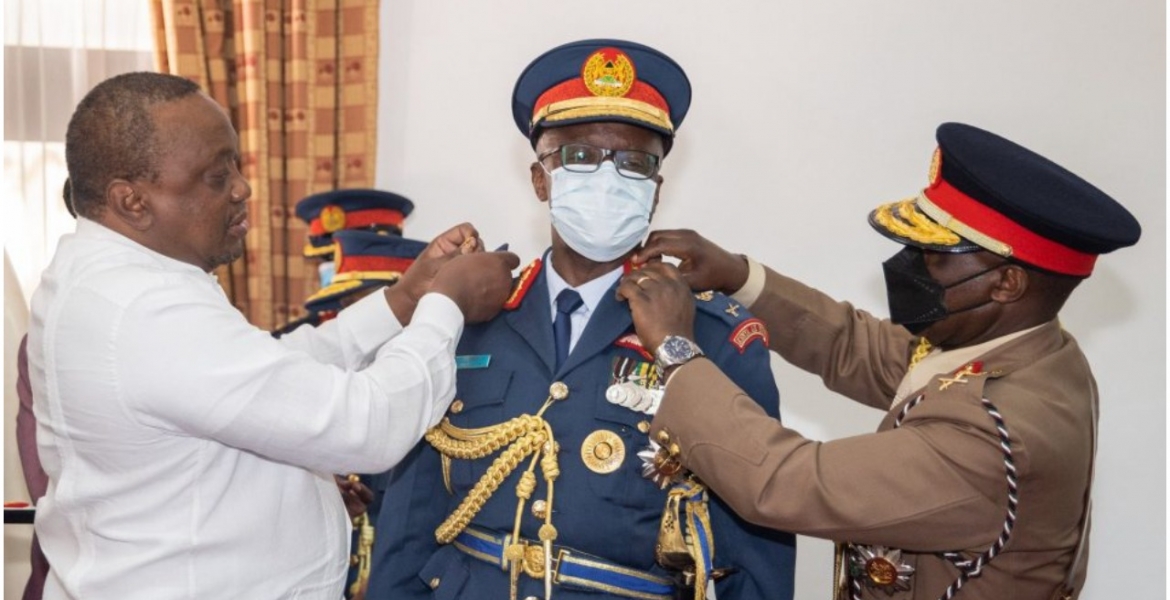 Ogolla, who has been the Commander of the Kenya Air Force, was subsequently appointed the Vice Chief of Defense Forces.

He replaces Lieutenant General Frankline Mghalu, who has gone into retirement after serving for 40 years in the military. Mghalu previously served as the Commander of the Kenya Navy.

President Uhuru also promoted Brigadier John M. Omenda to the rank of Major General and appointed him the Commander of the Kenya Air Force.

Kenyatta, who is the Commander-In-Chief of the Kenya Defense Forces, further elevated Major General Mohammed Badi to the rank of Lieutenant General and remains the Director-General of the Nairobi Metropolitan Service (NMS).

Also promoted to the rank of Lieutenant General is Major General Albert K. Kendagor, who was subsequently appointed Force Commander Designate of AMISOM.

Handshake project to Omeralize the KDF.Another Uhuru trick on muuaji Raila as Ogolla will achieve little in Uhuru’s remaining year in power.MAGATHIA.

WAKENYA, please look at this line up and let me think what you think from a political perspective.
This shows who is being line up to be the next president.
I pray that I'm wrong.

You all smell everything on tribal lenses, look at their resumes you maggots and wake up from your 18th century mental tribal slavery! Jinga kabisa!!!

Comrade Jemutai... I love you.

It does not take an intellectual to understand what is going on . God save Kenya

In 82 the jango tried a coup but now one of them is back on top. Can he be trusted to be head of all forces in a hustlers govt. Time will tell.

coup-de-tat if Raila loses BBI and or 2022 elections. Thats how desperate raila is