Ruto: Hustler Nation is the Largest Movement in Kenya 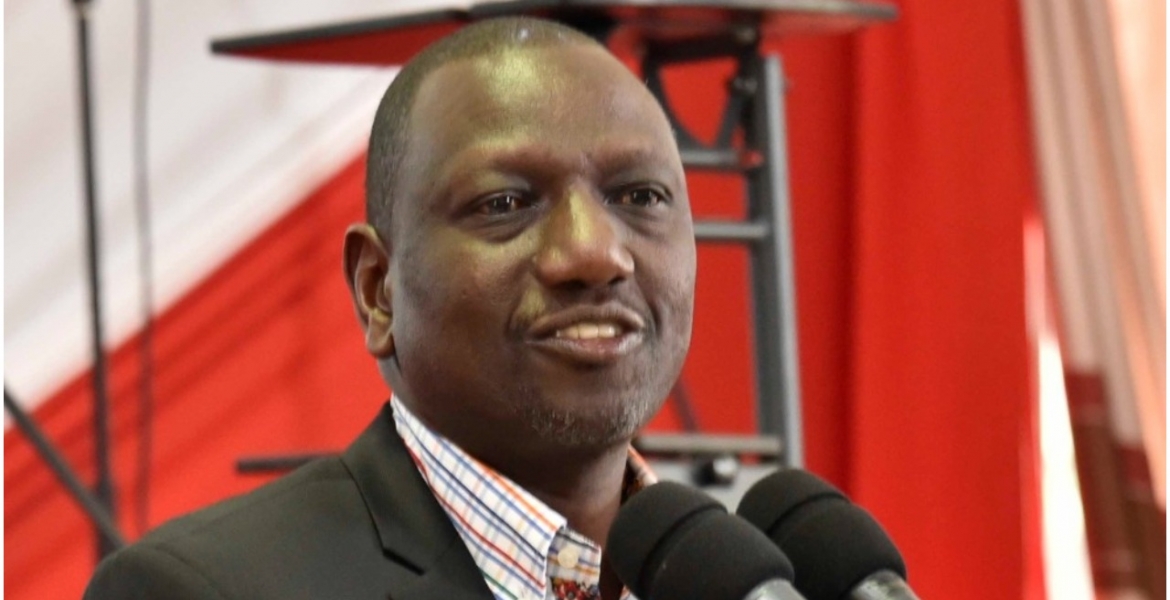 Deputy President William Ruto has exuded confidence that his hustler movement will take over the country’s leadership next year.

Speaking during a service at the Global Cathedral Church in Lang’ata on Sunday, the deputy president termed the hustler nation as the largest movement of ordinary people in the country.

Ruto, who is eying the presidency, said the challenges he has faced under the Jubilee administration have transformed him into a survivor.

“I have graduated from hustler to survivor because of the many challenges I have undergone. God has had to step in many times for us to be where we are today. In our nation, most people thought that the word hustler was abusive, and it was about people at the bottom,” Ruto said.

He added: “But today the hustler movement has actually created a revolution in Kenya. The hustler movement has transcended communities and regions, and is the largest movement in Kenya of very ordinary people, and many people did not expect that the next leadership of Kenya is going to come from the most unlikely quarters. I am very confident that going into the future, the solution for the challenges we have in our nation will come from the most unlikely quarters.”

At the same time, Ruto told off critics of the wheelbarrow symbol of the United Democratic Alliance (UDA) party and questioned why they are not opposed to orange as a symbol of the Orange Democratic Movement (ODM) party.

“I’m very happy the hustler narrative has changed the conversation in the country, everybody is now talking about how to change the subject of improving the economy of this country, just as I started a bottom-up approach to ensure jobs creation, and improve the lives of our youth,” Ruto remarked.

I agree with your good assessment about muuaji Ruto! He is battle tested in killing children; the worst kind of murderer one can be; for killings young helpless kids!

The natural justice allows everyone to have dreams and aspirations. Under natural law Ruto is certainly entitled to such justice but it is highly unlikely that he will be the next President of republic of Kenya in the next few years. The odds are against him at the current time(don't ask me why, that is a topic for another day) however, it also doesn't mean Ruto will never be President of epublic of Kenya

@lalo - Ruto is a specialist in insulting Kikuyus. He wants to make sure he destroys our vibrant economic base so he can run us over at will.

Ruto has graduated from insulting Uhuru to making kikuyu youth downtrodden in their thinking! He tells them to live a no-purpose hopelessly driven life! Kieni youth are now fighting back because they have realized that they will not take the sick hustler tag from Ruto!

Some politicians from central Kenya are partaking in the Ruto negative ethnicity matakonomics narrative of damaging the future of the kikuyu Mugumo tree; the youth!

Ndindi nyoro, one of the central’s lost youthful politician calls it bottom-down-down! This muhuni is taking the hook and sinker from Ruto like a damn COVID medicine!

Wahome, the old confused female deer, calls matakonomics her own future in making corruption possible and free! She calls matako-down-extra bottom! Boy, we are royally strayed and screwed by a mad murogi; the DP Ruto!

Khaemba, if the Kikuyus had a small tribal brain like yours, they would be the poorer. Remember Kenya is a democratic state. The few Kieni are practicing their right if they can demonstrate it peacefully.
I also see here that you are courting Ndindi Nyoro for marriage. Appeal to him the right way. Who knows you might be lucky!
At the end of the day, as we see and know, Ruto commands 3/4 of kikuyu support. Facts you cannot just play around with. Please don’t underrate this big number of support for Mr Ruto. They have eyes and they see!

Hustler, I think I can vote you even though I don’t believe you have the answer to Kenyans’ problems. The problem of black people is education and corruption but not poverty. To change Kenya and Africa once and for good, please focus on education and eliminate corruption. I don’t think this is going to be an easy task for you because the people supporting are corrupt. You will not have the courage to “fire them”… because it is only by having them that you will remain in power. I truly admire your courage, resiliency and determination but sincerely speaking, problems we have are beyond your capability. Black people in general must transcend… Mandera tried to transform South Africa after end of apartheid but it is looks like South Africa was doing better under the white regime. Free things cannot change Kenya but free quality education can lead to innovation and end of extreme poverty. Poverty is related to the mind in some way. Brain has the answer. Change your hustler philosophy to education, innovation and industrialization philosophy… The brains of black people are underutilized. Mr. Hustler if you become the next president help us to change our mentality… from Saidia maskini to “I can help myself”… if I am accorded a corrupt free environment, and equal opportunities to everything including justice… Mr. Hustler if you can’t jail the corrupt rich people…. you will just be there to protect your 10 years… others have done the same. That has been the cycle “protecting the power”. Can you be different?

Ruto is just lying about how to improve the economy of Kenya! Huyu hustler mbandia yuko na shinda zake mwenyewe!!

All Ruto wants is to be president so he can steal even more without anyone watching!

Surely this man Ruto has something mentally wrong with him! He is determined to lie to himself and a few other characters! Dominic tupu tu! Hustler mbandia!

The word “hustler” is a very abusive word! It simply means a thief is n kikuyu language! Ruto is now insulting the Kikuyus with some crazy names.

The Kikuyus are plainly hard working people like they have always been! We don’t need to tell us what we have always know about the ethical nature of working hard!

People are opposed to the wheelbarrow symbol because it stands for a depressed poverty stricken people!

The owner (Ruto) of that label is the greatest lair on the entire earth! How does someone who has never held a formal job own thousands of stolen land, helicopters, gas stations, houses, etc?? Can Ruto account for all his wealth?

How does anyone graduated from being a hustler to a damn survivor!? The chameleon still remains to be a chameleon regardless of how many colors it adopts in all sorts of environment! We are very tired of being lied to by a mad man!!

Ruto is trying hard to repackage the same old tired message of the downtrodden of which he is the worst oppressor! Kenyans are not buying his new gig though! He is all alone and he is doomed to fail!

He’s buying one church at a time. Seems like almost every minister in Kenya has price. Whenever ruto attends church he has to speak that’s how you know he paid off the church leaders. Pulpit is a sacred place and it’s no place to campaign and bring your political agendas. Respect the House of God.

Ruto has put the hustlers in Laikipia to steal the land for home! They are maiming and killing Kikuyus. They are taking the kikuyu land and burning their homes!

Ruto is slowly repeating the Kiambaa church narrative of killing Kikuyus! He has tasked various politicians to help him out! Asked ndindi, Rigathi And Waiguru, etc how much Ruto paid them to get on the ground in Laikipia!

The largest and poorest movement in Kenya history. I dream of a day when our leaders will work for the Kenya ppl. Eliminate corruption and have leaders that work for interest of the public. Ruto needs to speak on corruption and tackle it. Kenya loses trillions in corruption alone

The dirty politics of the old times of suffocating the faithful with political tun drums inside the house of God are quickly coming to the end! We have become sick and tired of politicians who make the church a theater of the absurd as they take over scheduled sermons!

The ACK Archbishop should be congratulated for stopping politicians from silly childish antics in the Lord’s mighty house!

I hope DP Ruto will get this spoken message loud and clear! bragging in Church is not Godly! You give to God what is God’s share without making some public pronouncements to show how much you can drop at tha Alter!

There is no place for political theatrics in God’s house. I’m glad the church leaders are not speaking out against this chicanery tendency that have plagued churches for a long time!

Ole Sapit the Moran of the Lord has spoken! No politicking in the house of God!!

It is about time the spiritual direction and guidance come from the inspired voice of the Lord Jesus Christ through Archbishop Sapit! Hallelujah Amen 🙏!!!

Now we can go to. Hutch to worship the Lord with peace and everlasting love!

The only revolution Ruto sanctioned is the Kiambaa massacre where he an-aerated women and small children!

The youth understands Ruto’s evil intentions! They all know Ruto is a fake murderer who preaches water while he is drinking Chagaa!

Please DP Ruto stop reminding us of your Hitler actions in 2008! Revolutions are conducted by cowards! You are a coward if the highest order as you revisit killing of Kikuyus in Laikipia!

The hustler nation is a mirage! It is not here or there! It is a dead concept put together by Ruto’s mind of lies! A dead campaign slogan by a thief whose idea is to confuse Kenyans; and especially the youth! A hustler narrative died before it was conceived!

Does Kenya have a fake Trump in DP Ruto who claims every thing is “big” when it is not there? The hustler team is a very small group and it’s fortunes are crumbling down real fast!! Ruto should not dare lie to Kenyans about a hustler revolution!