Don’t Elect Thieves Who Will Ruin My Legacy and Kibaki's, Uhuru Warns Kenyans 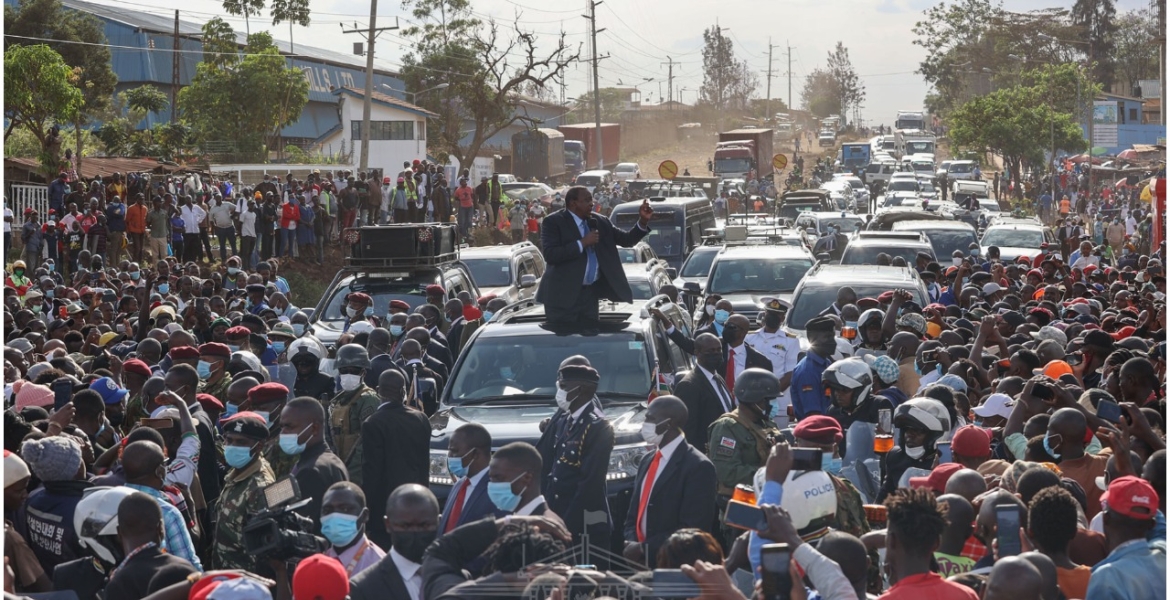 President Kenyatta has warned Kenyans against electing “thieves” who will ruin his legacy and that of his predecessor Mwai Kibaki.

Speaking in Ruiru on Friday, Uhuru said the fate of his legacy and that of Kibaki will be determined by the kind of leaders Kenyans will elect in the 2022 election.

Without mentioning names, Kenyatta cautioned Kenyans to be aware of leaders he described as crooks and thieves.

“I urge you, don't be incited. Choose leaders who will ensure this country remains peaceful and united and those who will carry on with the work we already started and not take us back to where we came from,” Uhuru said in his native Kikuyu language.

He went on: “Please don't allow Mwai Kibaki's 10 years and my 10 years to be destroyed by electing crooks and thieves.”

The president urged residents to carefully scrutinize aspiring leaders and pick those whose agenda is peace and unity of the country.

"We cannot have violence after every five years. I want peaceful people, people who will be united. I don't want people who only focus on insults. Peace is the foundation of everything.”

“I will be together with you. I know just like myself, you too don't want violence. I know once I retire this is where I'm coming back home. I would want to visit this area, interact with you, and since I will not be busy, I can join you, buy chicken or even have a soda as we talk…,” he added.

Kenyatta was addressing members of the public in Ruiru after presiding over the passing-out parade of Prisons Cadet Officers at the Prisons Staff Training College (PSTC) in Ruiru.

How did UHURU remember Kibaki the only one who was functional before witch Raiyila Ramogi ruined it all accompanied by most corrupt liar ALWAYS calling itself hustler while was Moi boy?

Kibaki meant good for NEGROES of that land as hired only professionals , people of good character..unlike Moi and Kenyatta.

Uhuru us a silver spoon boy enjoying what was stolen by his father..

Witch Raiyila and king of corruption are just deceptive to naive NEGROES.

Uhuru remember GOOD KIBAKI whom he opposed with support of professor of politics to keep dynasties ..

RAYILA the witch and king of corruption Dr. RUTO ( paid certificates) opposed all good for general NEGROEs if land..

Uhuru remember GOOD KIBAKI whom he opposed with support of professor of politics to keep dynasties ..

RAYILA the witch and king of corruption Dr. RUTO ( paid certificates) opposed all good for general NEGROEs if land..

Dr. RUTO is a liar. Moi made him

You want to know his TRIBALISM

ALSO KABILA ADUI( AS WAS CALLED BY RAYILA 2007) HAVE PRIDE , DECEPTION AND EXTREME LOVE OF MONEY..

ONLY POOR NEGRO FROM SMALL TRIBE WITH WISDOM WILL HELP ALL AND CREATE TRUST ON ALL .

COUPS ARE GETTING MORE IN THOSE NEGROES LAND

Babako moi and you ruined lives and a whole nation. Legacy of land stealing and tribalism and corruption. He has a chance to form a superpower in Africa but primitive energy that couldn't see Kenya beyond 100-500 years ruined for many generations.
Chinese strategic plan is for thousands of years. That's the difference btw you and your greed for 70 years.
Malize ukwende like your dad. Millineals will remember you for debt and pain.

Apart from debt I don't see anything this incompetent leader left as his legacy. A very confused leader Bure kabisa, instead of talking it's good gutumana ta itina ria thenge Mr unyatta.

Mr President, Sir. How out of touch can one be with their "subjects"?.Kenyans have Elected thieves all along.There are more thieves in the Kenyan parliament,Judiciary and the executive Branches than in all prisons in kenya.

Mr Uhuru kindly return all the Lands yr family stole since 1963 n the pandora monies then we will listen to you.We know the history very well who r the greatest thieves.It’s good for us to look n point on our eyes first b4 doing so to others.

Uhuru's statement(s) begs one 1 question: His good Legacy, or Bad legacy? To me it's bad Legacy he is Leaving behind; and elected Thieves will make it Worse.👹👹👹👹👹

Thieves are the only African President mentioned in Pandora papers. Thieves are the family members that were at the heart of KEMSA and Covid billionaires and never faced a day in court. Look down at your doorsteps Mr President. Thieves are family members that suddenly have become billionaires where you cry wolf 2 Billion is stolen a day. In less than 8 years kibaki legacy was totally destroyed by your heist government, yourself and family. Stop diverting attention with your incopentence. You have one vote and best you can do is use it however you wish and retire to Gatundu. While you are at it pack the remains of your dad at the parliament buildings and save tax payer money with guarding things that are irrelevant to Kenyans. Take them where they belong Gatundu.. owing offshore accounts and illegally close to 1/8 total land in Kenya could be best defined as theft.

One thing I agree with him is that, choosing our leaders is in the hands of the electorate,the voters.Yes,election can be rigged,and voters brided,that does not change the fact that choosing is in their hands.