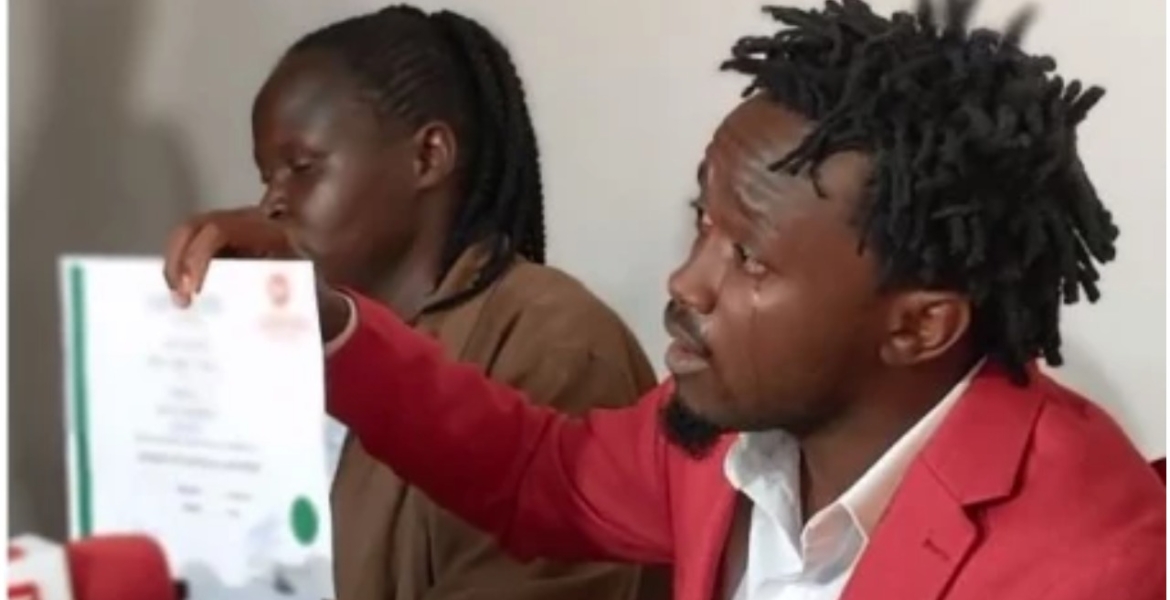 Celebrated singer Kevin Mbuvi Kioko, alias Bahati, broke down in tears as he protested the Jubilee Party’s decision to recall his nomination certificate.

Last week, the ruling party awarded the artist a ticket to contest for the Mathare parliamentary seat in the August 9th elections.

Addressing the press at a Nairobi hotel on Monday, Bahati claimed Jubilee recalled the certificate and asked him to shelve his bid in favor of incumbent MP Anthony Oluoch, who is defending his seat on an ODM ticket.

The singer says he was informed that Jubilee cannot field a candidate in the constituency since it is zoned for the ODM party. Jubilee and ODM are both constituent parties of the Azimio La Umoja-One Kenya coalition.

"I am also in Azimio and this certificate here is not only for Bahati, but it represents many other youths, this is a sign of hope. I respect my president and Raila Odinga but please give the youth of this country chance," Bahati said as he broke down in tears.

"I know there is zoning and Mathare has been zoned as an ODM area but for this one time give the people of Mathare to choose the leader they have always wanted."

The singer argued that the people of Mathare will be denied the opportunity to vote for their leader of choice if his name will not be on the ballot.

"I did not come to politics because I wanted a job I already had one but the people of Mathare want people that can understand their problems, someone that comes from them,” he said.

"I personally have made a decision that I'm not backing down from the race. My name will be on the ballot on August 9. I will not step down for someone that does not understand the needs of my people.”

Run as an independent why force yourself on a party because you have a false sense of popularity thinking you are the chosen one.Let the people decide if you are the “chosen one” then you will be victorious Don’t write a check your butt cannot cash halafu usindikize na crocodile tears.Hizo ni pesa za wanainchi mnasanya eti people’s representative the new way of getting rich is politics.Look at Keroche madam she is now on the way to stealing even more considering how much she owes in unpaid taxes which she may never pay and now she has a chance to steal even more

Who remembers BAHATI photo with a pink dress and goldish heels posing like a gal toto .....Then You Tell Me My M.P going to parliament like that ......BAHATI. ...just do music.... BUT KUWA MP ama IN politics.Utakua """"UMEKUJA SANA " ***We need a leader who is a Mirror to everyone even the aged...... Please Please please just do the heels not politics ..or please start some internship.....

Where’s democracy: the right to choose and be chosen?

Kenya is no more!

Kevin Mbuvi Kioko is crying foul because hakupatiwa kiinua mgongo for him to step down in favor of Anthony Oluoch. Maybe his amount was one Azimio could not agree with wakamwambia apotelee mbali.

Perfect Ahab under the foot of jezebel. Shetani ashindwe

Go as an Independent candidate. You will win brother.

Bihari has done nothing since he was elected in 2017. All the reason he being asked to step aside and let someone else serve the people of Mathare. Well Baha’i, you can always go back to your old job since you say you had a job.

Which story are you responding to

Why is this guy crying over a nomination?? That money must taste sweet for a whole grown man to cry! These guys develop a huge big head when they get elected but deep inside they are skill little Tads. Get over it dude.

Keep on crying baby Bahati. The worst is to come yet when you are no longer an MP but still required to pay the huge loans you accumulated over 5 years. That’s when your real tears will come when things start crumbling apart. Kimeumana Bahati.

Who Remembers BAHATI photo with a pink dress and goldish heels posing like a gal toto ....Then You Tell Me My M.P going to parliament like that......BAHATI. ...just do music.... BUT KUWA MP ama IN politics.Utakua """"UMEKUJA SANA " ***We need a leader who is a Mirror to everyone even the aged...... Please Please please just do the heels not politics ..or please start some internship..I really love your music ...but I can't accept you as my leader since all we you know about you it's Clouts