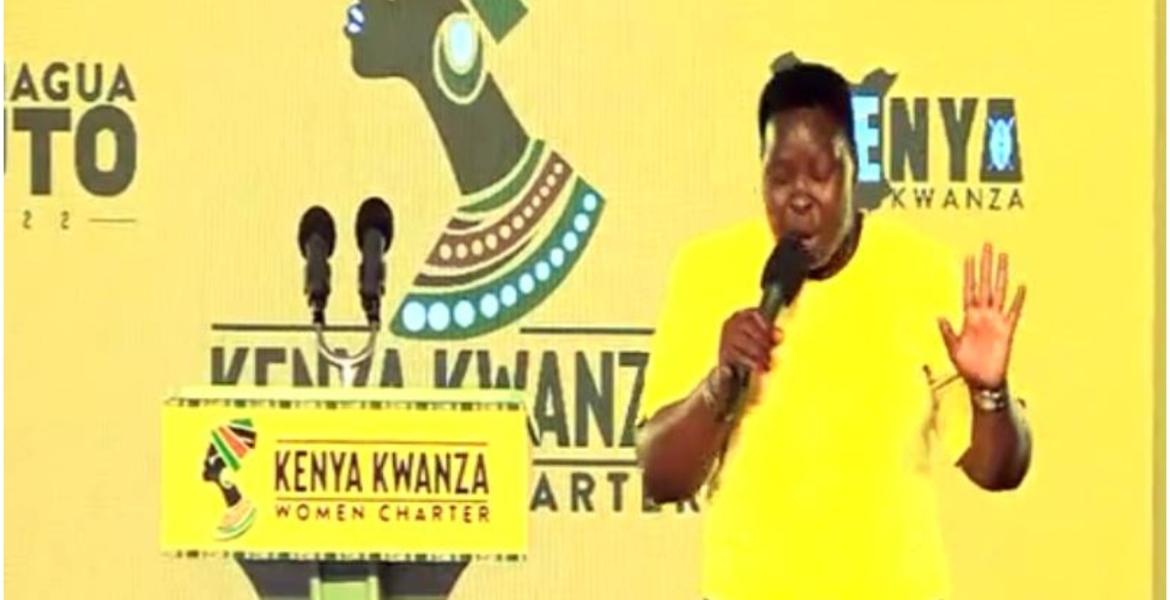 A pastor suffered a slip of the tongue during prayer at a Kenya Kwanza Alliance event at Nyayo Stadium in Nairobi on Friday.

Evangelist Jane Wairimu was praying for the alliance’s presidential candidate William Ruto and his running mate Rigathi Gachagua during the Kenya Kwanza Women Charter conference at the stadium when she referred to the coalition as “Kenya Kwisha”.

“Kenya Kwisha” is a popular term used by Ruto’s political opponents to deride the Kenya Kwanza Alliance. The evangelist quickly realized the goof and nodded in disproval, before continuing with the prayer.

“Thank you God because of where we are heading, our next president (Ruto) is our friend, he has taught us about walking with you, he has taught us about being strong... Were it not for you Lord, he would have already lost the battle. On this date, we want to come into agreement with the “Kenya Kwisha” aargh... with the Kenya Kwanza women that every handwriting has been erased," she said.

This happened in front of Ruto and Gachagua, who were caught in surprise and appeared embarrassed.

During the event attended by women groups from across the country, Ruto pledged to implement the two-thirds gender rule within the first three months if he clinches the presidency.

“Within three months of the Kenya Kwanza rule, we will put a mechanism to actualize the two-third gender rule and immediately operationalize that mechanism so that women don’t have to wait longer,” Ruto said.

There was no mistaken speech by the pastor. She knows kenya will be finished if Ruto and regard are elected. It’s the voice of the Lord that was speaking through her mouth. The Lord made her speak about kenya Kwisha just like Johnna was swallowed the the while to go to Nineve. There was no slip of the tongue by the pastor.

You are truly correct pastor about kenya kwisha with two thieves on board. Don’t you think Fod confused your mouth to tell the truth to the people that you are personally misleading? God works in many mysterious ways. Kenya kwisha with Ruto and Rigathi.

Wairimu was guided by the holly spirit to tell the people of God the truth. The Lord rolled her tongue to tell people to be mware of Ruto and his UDAku team. Wairimu knows that Ruto is not good for kenya. But she has eaten stolen money from Ruto and she had intended to lie to the people over earthly material things.

The Angles of the Lord will make even the Pastors to speak the truth to power even when they have been bribed to lie to the people of God.

A spiritual leader should never make any attempts to mislead the flock.

All voters in kenya are a formidable force to make sure that a thief does not get to the seat of power. The women of kenya do not want to vote for Ruto, a man who will steal everything and leave the future generations suffering.

Ruto has failed to actualize the 2/3 gender rule for n the ge past 30 years he has been in politics. Now he is lying to women that he will bring it over board but he did not say a word when the parliament opposed it not to long ago.

Hopely women are more intelligent not to be hoodwinked in the last two months of campaigning by kenya kwisha.

Pastor Wairimu’s prayers were inspired by the Holy Ghost to let the entire world know that God is not pleased with Ruto for stealing l, corruption and many other crimes.

It’s God communicating through Wairimu to all those wanting to cast a vote for Ruto who will finish Kenya. The Lord has spoken and people just need to obey God.

God does not want Ruto to burn more women and children inside another church in Kenya like he did in 2007 during the Kiambaa massacre.

Now every kenya has been warned through a Pastor of God. Wairimu was sent by God to tell the people the truth so they can make an informed voting choice.

Now the whole country knows that God is against DP Ruto and Rigathi gachagua being elected in the presidency to lead Kenya. Who can deny the voice of God?

Don’t Ruto wish the media wasn’t anywhere in sight? The cat is out of the bag fren.

Certainly it will be "Kenya Kwisha" if Ruto and Gachagua are elected. The good thing is she said it to their face. They have plan to dismantle Uhuru's accomplishments to date. Not good for the country. Then both of them cannot be trusted with the taxpayer money. They might bring back Henry Rotich to steal again. So yes, Kenya will be in ruins; Kenya will be Kenya Kwisha.

Cat can claim will protect meat

A pastor can’t make mistakes while praying because everything she/he utters is guided by the Holly Spirit.

She was forced and eternally obliged to tell all Kenyans the truth about DP Ruto and what he will do to mess up Kenya.

The pastor Wairimu publicly said what every Kenyan has feared about DP Ruto destroying Kenya In the glares of all Kenyan media.

What the pastor said is Devine intervention wisdom from God telling Kenyan voters they must respect the will of God for Ruto not to be elected as Kenya’s president on 9 August 2022.

Ruto is the Lucifer who is deemed to cause the destruction of kenya if elected president. Kenyans have been publicly warned.

That was not a slip of the tongue as many claim. You speak what you have always been thinking

Precisely that is the truth. Pastor Wairimu said exactly what has been in her mind about UDAku and Ruto, and especially as a Pastor who fully understands that DP Ruto killed kikuyu 37 women and children by burning them alive inside the Kiambaa church, she felt obligated to say the truth in form of prayers. As. Kikuyu woman pastor, Wairimu would be wrong to betray all those Ruto have killed. Pastors do not misspeak.

God will lead you say the right words "Kenya Kwisha" under Ruto & Rigathi. That was not a mistake.

God sent His lady pastor to tell the Kenyan people the truth about electing Ruto and Rigathi. God told pastor Wairimu to let kenyans know kenya will be finished by two known thieves called Ruto and Rigathi, and no Kenyan should vote for them. Wairimu’s prayers was a direct message from God.

Rigathi just insulted all the Kenyan women by telling the police to give women of PCEA church their used blue uniforms. No wonder Ruto wants to continue subjecting Kenyan women to wearing old mitumba clothes from the dead Chinese.

Never in the political campaigns history a man running for presidency ever insulted and demeaned women in and churches in public. Rigathi just did precisely that in Nyandarua County. Women beware because Ruto and Rigathi have no respect for women and the church.

God made pastor Wairimu speak the kenya kwisha truth in front of Ruto and Rigathi to reveal the truth to them about their candidature which is deemed to destroy kenya.

Pastor Wairimu spoke the real truth of kenya kwisha in Ruto’s hands. A very clear message that should worry every Kenyan voter.

And pastor Wairimu truthfully prayed while Kenyans ran away from Ruto. She divinely confirmed to the masses what WSR will do to kenya and Kenyans - Ruto atamaliza kenya.

Kenya will automatically become a pariah nation If Ruto is elected president. You can have a thief running a country. Ruto and Rigathi will completely destroy our beautiful country.

Pastor Wairimu, please do not be sad for God directing you to tell His children about Kenya Kwisha under two god forsaken guys - WSR and Rigathi Gachagua.

God is very proud for your honesty as a servant of God. You will be well rewarded on the judgment day for speaking the truth to power.