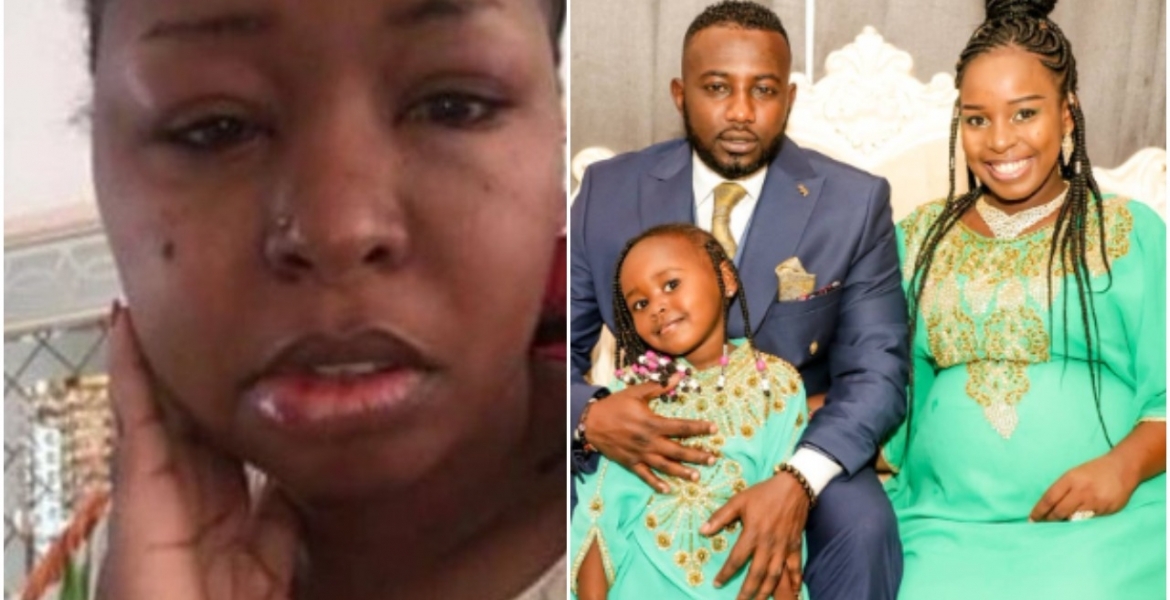 Loitiptip noted that he only beat the 25-year-old once, during an episode of bipolar, a disorder he says impacted their relationship negatively.  He added that at the time, he had no idea that she was suffering from a mental problem.

The politician said Kenyans should not judge him as they are unaware of the behind-the-scenes happening in their relationship.

“She has a mental psychiatric problem called bipolar. That’s why we never stayed together. She breaks things, shouts, and loses memory for even a week. Imagine, and all the Kenyans and media houses don’t know. I always hide this from people,” Loitiptip told a local news outlet.

“Call her family members, mine, friends, hospital. Everyone knows she is sick. It’s just you media guys who don’t know, and we opted to hide to safeguard her name, but now she has turned her story to favor her.”

Saumu, a mother of two, recently revealed to her Instagram followers that she broke up with Senator Loitiptip after he beat her to near death. She shared a photo of her bruised face following the beating by the senator.

“These are the things he did to me. He almost killed me. I will forever fight for women to stand for their rights. Never allow a man to be violent to you,” she posted.

Saumu has since confirmed she is suffering from bipolar disorder. “I’m okay being bipolar, it’s just a plus. It makes me super perfect, I don’t entertain fakeness.”

The two began dating in 2019 after meeting in Mombasa, where Saumu was on holiday while Loitiptip was there on official duty. The two were blessed with a baby girl in March last year.

Sonko needs to send his goons to nyorosha Lamu Senator Anwar Loitiptip just once. A tooth for a tooth.

This a****** needs some thorough whooping! So, you physical abuse a woman because of a mental disorder instead of helping her seek treatment or sending her back to her parents?? What if your daughter will inherit bipolar genes will you encourage people to beat her up? Dude, never lay a hand on a woman, simply walk away or let her go! Can’t believe you are a public figure - a senator? You deserve Sonko’s wrath!

Wife beating is old school. It don't happen any more in modern society

There is nothing modern about Lamu; and so is this rouge Senator!

So how does beating up your girlfriend or wife cure bipolar disorder?

He snapped. And it could be because he couldn't handle it anymore.

If you are frustrated, walk away. Where was the child while he was beating his child's mother? Beatings have never cured mental illness. Isn't it strange that weak men like this never attack other men when frustrated?

How about you @bibbbi getting heated by a snapper? Would you like it!?

Senator: Do you mean that those with disorders need to be beaten? Were you beating her to drive demons out of her? You should be ashamed of yourself.

He should be put in jail!

This idiot was elected by some people? Eti 'and Kenyans don't know' that she is sick. How did these basic miscreants become the law makers in Kenya?

You personally voted for this yahoo! Didn’t you @ sheneke?

Bipolar needs healing by deliverance. Medication helps but when they don't take meds you are in trouble. Loitiptip should have resources to help. Sonko could help despite his own peculiar episodes.

I think Sonko has been misusing his Rescue Squad all along. Here is a perfect job for them to handle.....

Surely I would volunteer to assist to by teaching this damn Senator a good lesson! A good kick in between his legs till his 1 1/2 nuts burst open!

@ Joyce, if you do that, you might make him unleash his pain on the girl friend. How about persuading the lady to leave this abuser.Once and abuser always an abuser. He will to it again.

I really miss Wangari Mathai! She is the only woman who could have organized 2000 strong women to go beat this idiot at the parliament building! That is the only way this madness will stop! @maxiley, I will have you hold this fool down while I piss in his 👄 mouth; will you do so please?? I need held from a good man!!

By the way, if you have followed my comments on injustice, I always ask,where are the moral majority? If the masses protest en masse,mobilize,and match on street,or go to offices of the "evil perpetrator" the message would have more impact...
So, I agree with you.Surely there must be another Wangari Mathai in our midst.

They (men) keep telling women to be civilized while they keep beating women using the laws of the jungle! Any parent who has a girl child should be worried/ concerned about this animalistic behavior of men beating wives ( generally women) and no man stands up to be counted!

However, I congratulate @maxiley for addressing this ridiculous matter! How would like if women descended in men nationally, just like Nyeri women do with their men? Would Uhuru speak out then? We have a huge crises of men beating women in Kenya!

Women need to get together and do a Loretta Babbit ( cut the senator’s pinus off) to effect a National discuss on women treatment!

More men must come out to condemn it. It is the men who should organize demos in support of this kind of madness!

I hope @maxiley and a few more good men can show up at this hundrum Lamu senator’s office to protest the wife beating no later than today! And where is Sonko in all this nonsense? He should be fighting this guy like a mad dog!

This matter should not be swept under the door rug and be forgotten! We must raise up a land fight back all these men who are killing women and no body got enough go-nuts (makende) to say anything; Uhuru/Raila/Ruto included! Do these high profile men beat their wives too!? Well it has been rumored that Ruto beats Rachel! Maybe all the reason he can’t say anything!

The senator has poor leadership skills, however he should be arrested and prosecuted for assault, hopefully he doesn't buy a judge or somebody else for the case to disappear.

I hereby authorize all the Sonko goons to descend on this childish Senator who is beating a woman like a damn dog! He is nothing more than a freaking dirty little lizard! Swaga yeye Kama unga ya Ngano!!

Where is freaking finda?

The Senator has triple bipolar if you asked me! A very coward dude indeed! Mafi ya nyeeeee Kuku! Huyu mutu ni Shetani!

Huyu mtu ni munyama, plus Shetani, plus Lucifer, plus Devil all concorted in the same dirty pot!

Only Senator Murkomen can beat his wife like this and get away with it because the kale community condones wife beating!

Murkomen’s wife is from Nyeri! She is not scared of kale tradition of beating women! She can beat a thousand strong (weak) men! Murkomen won’t dare mess with her! And he knows that extra well!

Where are the real men to stand up to this idiot Senator? His dirty actions are simple a mere shame to all men! Pin this stupid fool to the stone wall and teach him a good lesson! Funya hiyo makende and he will never beat another woman! He should be forced to resign!

I quickly respond whenever call upon! And in case of a man battering a woman, we can get there within minutes! Senator, just hope Sonko does not call on us to help!

Kenyans should REVENGE for Saumu instead of waiting for Sonko’s release from remand/hospital.The useless senator should be whipped/canned/cut once by all men near him.It’s better if the GAZA GANG acted now without waiting for orders from above.

Who names a child Loutiptip? This senators’s name simply means a mad man! No wonder he is beating the wive because he is mentally sick, possessed by his lunatic birth name!

Only his innocent mother (hopefully a woman) can respond to your urgent 🙋‍♀️ question! What is in a man’s name? This Loutiptip is pretty useless indeed! Senator Ole Kina ought to tell us why a man with a Maasai name is beating a woman instead of being a Moran who protects women from lions!

Loitiptip - you are beating your wife while embracing a little girl in this photo! The girl looks very innocent while not knowing the man embracing is a total monster! This girl has seen her mother suffer from the pain and injuries you have inflicted on her mother. Loutiptip, how do you reconcile the damage you are doing to this little girl with your bad behavior at home? Who is elected you a senator? You ain’t much of a man, except a wife beater! I ask you to shut your mouth and silently understand the psychological damage you are inflicting on the future of the little girl you are holding! You are a very useless man! I wish J could get my hands on your balls you dummy!

@njoki - we stand ready to teach Loutiptip a good life lasting lesson whenever call upon! We stand with women and for women! Beating a woman simply means putting a stain on all men! We can easily stop this mad coward men!

Sauna - we are watching your situation closely! Please stop defending a mad husband! He is a coward! He will beat your daughter too!

Did Loutiptip call his wife mentally sick after senselessly beating her to death? Really gods must be very crazy!