Media Personality Maina Kageni Explains Why He Will Never Get Married 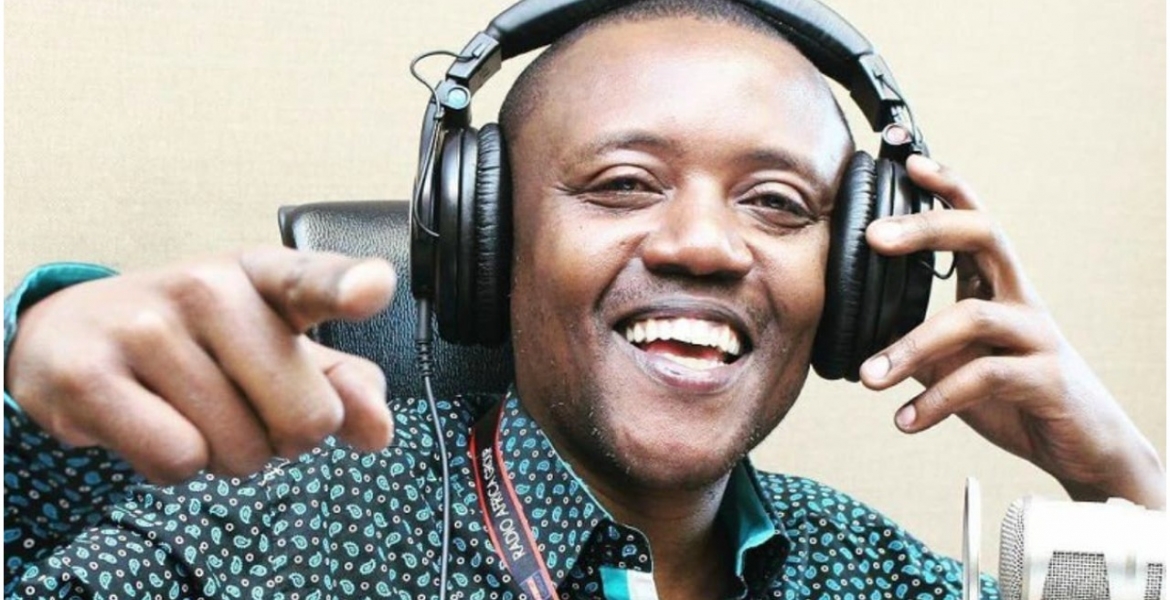 Celebrated media personality Maina Kageni insists he has no plans of get married despite pressure from his fans.

The Classic 105 breakfast presenter added that married men lack freedom and die early due to commitments.

“I got a problem asking for permission to do what I want. If I wake up today and say I want to go to the US in two weeks, I will go. Do you think you can do that if you are married? You have to ask your wife for permission and that’s what I have a problem doing,” said Maina.

He added: “Some of the things I hear on the show about marriage are scary. It has taught me one thing, marriage is not for everyone but never say never.”

The 46-year-old said he admires the life of Kenya’s first Attorney-General Charles Njonjo, who got married at 52.

“Sometimes marriage is not for everyone but never say never and I believe that. You know why? Sir Charles Njonjo got married at 54 or 59 na ako 100 sai ..wewe oa tutakuzika na 63,” he said.

On his stand on women, Maina, who is a father of one, said, “Women deserve everything good because they were your begging. Whether it’s a mother, sister, girlfriend or wife. All good things start there.”

Speak the truth billionaire Maina.Tell them jambazi Kirubi castrated you before he screwed your sewage line.What size of diapers & Nappies do you wear?

Unfortunately that is the story in the grapevines....n with positive status, Maina has done well...

Two things you said that I agree with:
1. Never say never
2.Marriage is not for every one.

Two things you said that I dont agree with
1.Married men dies early.Studies say married men live longer.
2.Women deserve everything good because they were your begging. Cannt make any sense out of this one.

All in all, nobody should pressure anyone to get married .Its not like they have forgotten it.You either want it,can afford it or dont. And what exactly is marriage offering that can not be gotten by any other means?
Yes, its freedom of choice,within a cultural context.

That is where I'm Maina, tuko wengi, if it happens somehow sisemi never, right now I'm cool with being single and free to do whatever but yes sometime I wish for it but after seeing and hearing many horrors of marriages especially with Diaspora Wananchi.. I'm good, marriage is not for everyone

@Guest3000 I am sure you have heard many deaths from cars and airplanes . I guess you don't get into any of those for fear of dying!

Maybe I fear marriage more than death, when dead you are just manure after that and I will never know what I died of but marriage I will have to deal with humans - HUUUGE DIFFERENCE!

Heeyyy guest3000, how will you never know what you died from, have you ever died to ‘experience’ the tale? May your soul reincarnates to some animal or something else as the buddists or other religions believe and maybe surely the deceased KNOW what they died from AFTER death? Mhhh?!

@charity - are you looking for a suitor? There are very few of them out there! Most of them are scared because women have turned out to be cons and scammers!

You probably could hook up with the incarnated @guest3001. But he might as well not like what the ladies got to offer and take up a dude!

Do you even know how to read or comprehend ?

Ask FIDA why marriage in Kenya has become an abomination! It used to be good and prestigious to have a family - wife and beautiful kids!

Now fida has turned all that upside down! Their view of men is full of bitterness and huge desire to destroy men. FIDA talks about men in the same terms they talk about animals such as dogs!

They (fida) think men are there to service women with sex whenever they need it and that’s it! They are even encouraging women to be lesbians! Fida is made up of a bunch of frustrated women who take the pride in misleading other women. They have destroyed the fabric of the society that held the family unit together!

Just look at Moi’s grandson and many others! Do you really think it is wise to get married, then the woman files for divorce with a monthly price tag of Kshs 1 mil in support? Hell no! Ngahikania ndenda! And maybe never! I agree with Maina Kageni on this one! I’m very free day and night!!

I like Njonjo strategy, getting a companion to retire with after kurandaranda dunia ha ha ha

Sodomites are leading specialists on marriage to lean on. Just imagine Abraham running to Lot to save his life. Haiwesmek

I agree with him. Marriage can be good but can also be a nightmare.

I went to a certain private school with this dude n must say he was cool but had a fear of the ladies.He is not gay as many have said but he is just really shy when it comes to gals.

You can say the name of the school(kind of like Kaiser but one letter removed and slightly different). Being rich or rich adjacent is not a crime.

Fear is the worst enemy to the thing you wish to do! But women have become more fearful than fear itself!

Be gay and be proud of it. The last time I checked, gay men marriages don’t last at all. I guess this informs the decision for Kageni not to get married. He has gone thro so many relationship breakages with his intimate boyfriends and can’t stand the thought of marrying one.

It is time to keep women outside the men’s world! Men are better off without women! Shortly after a man marries, you start hearing women looking at the material side of things!

I had this chic wanting to marry me, but she wanted me to put her name in my Bank accounts, in my house, in my rental property, in my cars and even in my underwear! But she had no income to assist with any bills. Yes, a Yni graduate with very fast legs! She wanted her name in everything I own even before we could get married!

The girl is from Kutus in Kirinyaga county! All I could think was to run very fast! She ended up marrying another dude and took everything he had worked so hard for!

Watch out guys! You can be broke within weeks in marriage! Don’t do it! Watch out the karinyaga women! They are known to scam men! I would rather hang out with a man beating girl from Nyeri! At least I can get a panga to stop the fighting!

Everyone has a right to decide what's good for them.
I was married for 25 yrs.... now I have to deal with divorce.
But it's all good.

Dude! What happened? Are you going to marry again? This is why Kangeni is expressing fears!