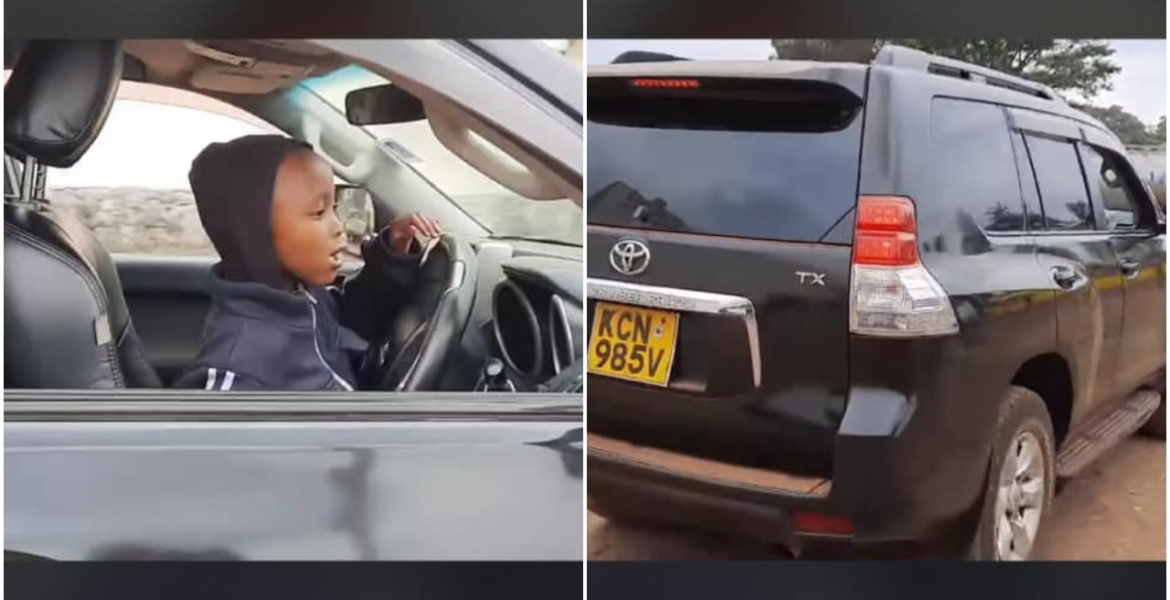 Ayub Kinyanjui Muigai, the father of a child who was videotaped driving a Toyota Prado over the weekend has been arrested. Muigai was arrested by officers from Kiwara Police Station in Gatanga, Murang’a County on Monday for allowing a minor to drive his car.

He is set to be arraigned in court to face charges of permitting a person who is not a holder of a valid driving license to drive a motor vehicle.

A video of the seven-year-old boy steering the luxury vehicle set tongues wagging after it went viral on social media.

The video showed the minor effortlessly and expertly driving the vehicle at Delview Park area in Thika. It is also alleged that the boy drives himself to school.

The video sparked mixed reactions from Kenyans online, with some lauding the boy for his ‘expertise’ while others castigated his parents for endangering his life and that of other motorists.

The law in Kenya requires one to be at least 18 years to acquire a driving license.

Add endangering a minor and neglect to that charge as well.

Muigai thinks it is all fun until the kid loses control and hits someone dead! Africans and doing the right thing has always been a major problem. Maybe Muigai is not fully mentally developed to understand a 7 year old child shouldn’t be driving a vehicle!

If "the child drives himself to school", then we have a problem. The father is Being an IDIOT; a Spoiler of his Child(ren) and Risking other People's lives.

I see nothing wrong with giving his son a head start. At 7, he’s basically a man already. Plenty of unlicensed drivers in Kenya. Get them off the road first.
So how can the father be arrested from a video? It doesn’t prove anything. Could’ve been photoshopped. I’m just saying

@KK. Head start, really. There is a reason young kids are not allowed to drive, no need to elaborate. If you are a dad / son / human you should know. By your reasoning, what next, giving 7 yr olds guns or letting them fly 767's. We have traffic laws in Kenya and everyone should follow them.

Why not hire a driver to take the kid to school? The parents are idiots. Looking at the picture you can tell the child is struggling to drive because of his size. I wonder if his foot is reaching the brake and clutch when sitting down.

There's no headstart in teaching a 7 year old kid to drive. Driving is a skill that you master in a few weeks.

Serious stuff. This kid might steal the car and head to Burundi soon. He and others not safe on roads. Insurance wont pay for any damage due to unlicensed driver acts. Poor parenting.