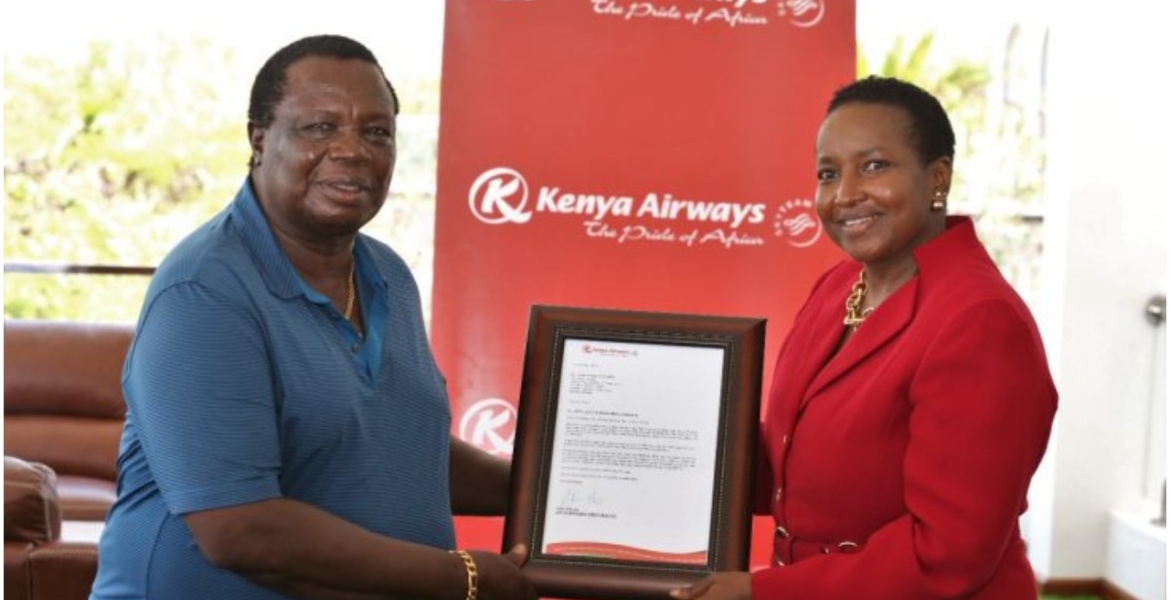 Kenya Airways (KQ) awarded Atwoli on Tuesday for being a long-time customer of the national carrier.

KQ in a statement said the veteran trade unionist has flown with the airline for almost a half-century.

“This recognition is a result of the patriotism to the National Airline considering Dr. Atwoli has been flying with KQ for close to 50 years,” the statement read in part.

The airline further awarded Atwoli a free business class return ticket to any destination of his choice.

“The KQ team, led by Evelyne Munyoki who is the Chief Human Resources Officer, thanked the Secretary-General for the great partnership and as a result, gifted Dr. Atwoli with a free business class return ticket to any destination of his choice that is serviced by KQ,” the statement added.

In a statement, Cotu said Atwoli’s consistency as a customer of KQ prompted the gifting of the award.

Atwoli, 71, thanked Kenya Airways for the recognition and encouraged Kenyans to continue flying with the airline. He noted that KQ is not only the pride of Africa but also one of the best airlines in the world.

Oh, so Atwoli is now ‘Dr’ Atwoli!! Mmh, using these honorary doctorate awards in salutations is not only satirically confusing, but makes a mockery of the one addressed as such when they never wrote and defended any dissertation! This title has to be academically earned to be used amicably! Not hating, just saying how foolish you look and sound when you have 5 doctorates like Moi and Kalonzo Musyoka and you force people to address you as Dr Daniel arap Moi or Dr Kalonzo Musyoka, Dr Shariff Nassir….Dr Joseph Kamotho, Dr William Ole Ntimama etc lol!!!!

Kenya ni nchi ya maajabu. Not to long ago I heard of a retired Kenya Army private being warned by the Department of Defense to stop using Major (Rtd) in his title.

We should be very happy. They help someone who could not afford it.

This pompous fat, and fart should donate to Mukuru kwa njenga the "opportunity cost". There is a mathematical formula for that, you monkeys!

Why give money to rich people. Why not ask him to choose giving to charity. Wajinga sisi.

This is not business,The man is the leader of a "trade union"

Dr. Atwoli is a patriot. No one is perfect. He deserves recognition while he is alive. He did not invent the honorary doctorate. He did not apply for it. Whenever it is given, very clear reasons and citation are given. Anyone cricising Dr. Atwoli should create a table with two columns. On one column, put your contributions to communities, whatever they are. On the other, put Dr. Atwoli's. After give scores according to personal judgement. Then share

Oh shit man Elkana- Atwoli has been flying at the costs of ordinary workers contribution , who he has never ever stood for them . Each and every election is rigged that is why he is there for so long . It is bogus to award him a dr title an insult to the title itself. Kenya airways ever broke and taxpayer money is used to keep them eating while them taxpayers live from minimum or which high earning people will pay membership for trade union. You don't pay to a corrupt institution which collaborates with employers if there is a court case or dispute. if you earn good , fired by employer you pay an advocate you don't enroll to fund Atwoli. ELKANA we want a list of his contribution i try to count i come to ZERO

Congratulations to the Doctor, as a US based frequent flyer who has attained Million Miler status on several US airlines your new title is well earned and deserved.

Some of the peons making comments above have no idea what it’s like to travel globally on such a consistent basis away from family and friends.

My hats off to you good Dr.