The Joy of a Mother: Kenyan Man Takes 83-Year-Old Mum to Harvard University 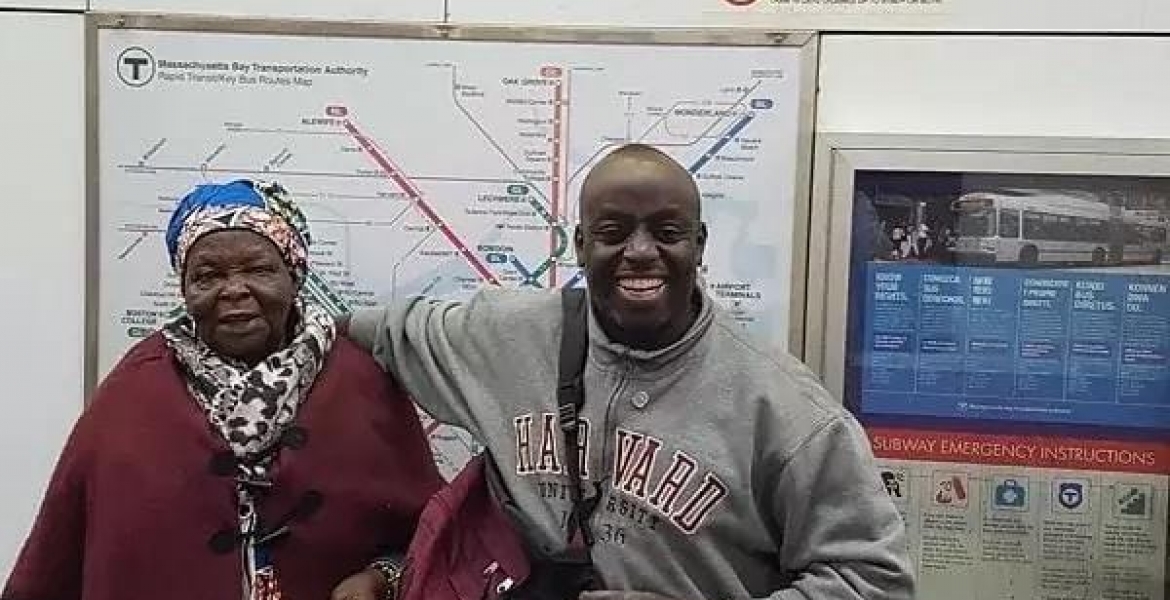 A Kenyan man has taken her 83 year-old mother to visit the famous Harvard University in the United States.

Chris Mburu posted a powerful message accompanied by photos of him and his elderly mum at the world-renowned Harvard University. Mburu narrates his rise from poverty to attending one of the most prestigious education institutions in the world

Mburu graduated from Harvard University 24 years ago, opted to facilitate her mother’s visit to the university after her mother, who supported his Education was unable to attend his graduation 24 years ago as it was it was too expensive to afford

The photos clearly reveal the joy he and his mum had during the visit. His mum is seen wearing a "Harvard mom" sweatshirt holding a souvenir from Harvard in her hand.

Though his mother was not educated, Mburu says that she was instrumental in the strides he has so far made.

"When I graduated here 24 years ago, my mother was absent from the ceremony, because it was too expensive for her to make the trip from my native village in Kenya to the United States. So you can imagine the joy I felt last week as I brought her for her first visit to the university, at the age of 83! Though uneducated herself, my mother has always valued education and indeed remains one of the smartest people I know," Mburu wrote on his Facebook wall.

Muburu is a graduate of Law School and is currently a lawyer with the United Nations Human Rights Agency based in Switzerland. A 2010 documentary “A Small Act” was based on the real-life of Mburu - about how a generous Swedish woman by the name Hilde Black helped fund Mburu’s secondary school education. Mburu would then attend the University of Nairobi and eventually go to the United States where he earned a law degree at Harvard Law School.

I dont understand. You were in Havard in America and you could not aford a $1000 to pay for your mums trip to come for your graduation?

Yes he had just graduated as a student, not necessarily as an individual with a well paying job. You should watch a" Small Act". It will answer your question

Before making damn conclusions, first watch the Small Act documentary. Will leave you in tears.

Job well done. $1000 is not easy to come by if and when u r a student Reuben. Infact some full time students make that amount while attending school...Been there done that. The bottom line is that her mom made it safe and sound.

Great mom and son. She was never educated but knew the value of it. She is a true model and one can proudly call her mom. Lakini kuna sultan who scored D- and he is proud of it. Shame on sultan.

Happy for her and Mburu you did great!!

This is so inspiring!!! Great job on bringing your mum to visit your former school and taking the pride.

Reuben- You're so negative and that's a damn question to ask. I also have been there as a student and it's very hard to raise that amount or invite people and pay for them when you are a student. Myself when I went to college, I was a student and I was working full time. But couldn't afford to invite anyone in my family for graduation. So, research information before you post something to hurt other people. "Think twice before you leap"

That is sweet, nice job Mburu.

Mburu has told us about his story. Thank God he n his mom are not where they were 24 yrs ago. She may have been poor then but has now graduated from poverty. Congratulations Mr Mburu. Some blamers have even took their mom or dad from shags to Nairobi.

touchy and inspiring shout out to Mburu moms