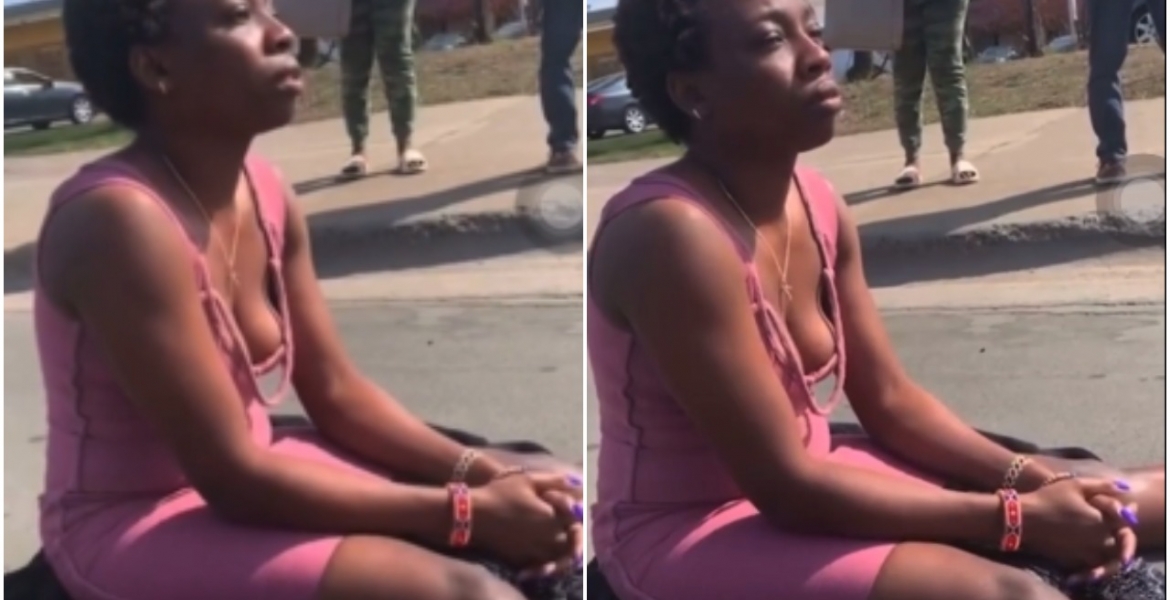 A Kenyan woman caused drama at Brooklyn Center in Minnesota on Monday after she sat in the middle of the road, prompting police officers to seal off the area.

The unidentified Kenyan lady was allegedly protesting the killing of a 20-year-old unarmed black man identified by Daunte Wright.

Wright was shot dead by a white police officer named Kim Potter during a traffic stop on April 11th, an incident that triggered massive protests in the city.

A video shared on social media shows the Kenyan woman seated on the tarmac road, and a second woman is heard reprimanding other black people for failing to join her in the protest.

At one point, the Kenyan woman can be heard telling police officers to stop staring at her and go back to their vehicles. She partly speaks in Swahili.

A citywide curfew was issued for Brooklyn Center from 11 pm Sunday to 6 am Monday as protests continued for the eighth consecutive day outside the city's police station following the death of Wright.

Protestors are demanding additional charges for Potter, who was charged with second-degree manslaughter, which carries a maximum of 10 years behind bars.

The shooting recorded on camera occurred 14 miles north of where another black man George Floyd was killed last year by a white police officer.

The Hennepin County Medical Examiner's Office said Wright died of a gunshot wound to the chest.

So proud of this sister!!

Her boobs her choice! Let her flaunt her assets!

Why are you distracting the good message she is sending out by pointing out what she forgot to do! Watoto Kama wewe niwengi sana hapa nduniani! Wacha Futuna na utoto!

This woman was under the Influence of Something; Inebriated.

Either high or mentally disturbed. She is crying out for help. She looks sad. And if she is truly sane, I would love to hear what drove her to reacting this way. Must be a personal painful encounter for her to sit there with her “girl” hanging out like that

Quite amazing @mary telling the world she is crying out for some help! Any body in the house to help!? Mary has severe mental issues! She needs some psychotic help before she loses it!

This woman was under the Influence of Something; Inebriated.

This woman was under Something; Inebriated.😩

Guys wenye wanasifu the USA wako wapi.This country is very unsafe for the black person.Any blacks person can b shot any any time.I wonder how black immigrants survives there either walking at night or driving.Any parents with black young man should really b scared to leave in this country.Oooopps I forgotten it’s heaven for many where it’s very safe than Africa

Kamirithu guy want others to believe that it is okay to kill Africans by African policemen,Raila led-violent robbers and Al Shaabab in Haven Kenya.There are many robbery with violence victims(including Kinoti who was shot 21 times by robbers/Railas).Kinoti should stop wasting his time denying the obvious.He should remember they-police follow nyayo of CIC who recently bribed councilors with shs 2b.each to pass the unpopular BBI.

Stop killing raila. Who are not murderers if not munguki?

You're a one track minded fool and the thought that most people are legal and choose to live and work in the US overwhelms your limited brain.
Live and let live..
Ok, just live.. i don't wanna confuse you.

Nani alikusaliti kaka? Kiwango Cha chuki na wivu you demonstrate towards Kenyan US residents in particular sio kawaida. Cops in Kenya routinely use raia for batting practice and lethal target practice on alleged criminals yet you are quiet. Is African on African violence more acceptable to you? The young sister is taking a stand. Mpongeze badala ya kuwa sideline critic

I am all for protesting, lakini she takes the shine off her cause when she hurls abuse at the Police. Two wrongs do not make a right.....so thumbs down to her.

@seneca - Your luo sister acting foolish in America, right? Buy her a sidiria first before you stfu others you damn coward!

I agree with you my sister. But dont a lone ranger in a foreign land especially here in America: your case will be handled differently from other nyeuthis. Join them instead. I hope you have makaratasi because once you spew that deep ascent, they will like to know where you come from. And you know where they will seek for information. If your actions are criminal and you have a greencard, woooiiii, Mungu akurehemu dadangu. Every time they stop at night in an isolated place, I put the hazards and drive slowly to a well-lighted place, hault, spread my exhausted fingers on the wheel, wait for further instructions. But a common phenomanon in all these white cops is, " Where are you going man, why didnt you stop." My answer, " Gotta look for a safe place officer!". The ticket, "I was doing 70m/h on a 50m/h street." The tragedy? They all show up in court.

That is what I was thinking, her greencard or citizenship can be revoked easily and there will be no Nyeuthi to protest for her rights, better be careful

@guest70: Stop misinforming people. There is no way someone can have their greencard or citizenship revoked by protesting. People have a right to protest in USA. You really don't know what you are talking about.

Yes he knows what he is talking about @sue! You don’t know what you are saying....

We need her back here in Kenya as soon as yesterday to protest police brutality corruption. Come help us please!

I dare her go protest in the streets of Nairobi. That’s where the real street protest needs to happen. America have its good share of race problems but I’d rather be here than most over countries. Go to most Asian countries, russia, Europe or even Africa and see how black people are treated. I’m not protesting, I like being comfortable in my home :-)

No body would expect a coward like you to stand up for anything! So don’t tell us what you already know are not capable of doing you drankard!

I’m glad you got that out of your chest.

It was never in my chest! I’m just telling you to cough out what is in your chest and clean up!

Is usa the heaven or the HELL

Better this lady who has gone to the street what of sisi wakenya what do we do we just coil our tail and ran to village. Revolution will come from the streets not homes . Kenya is worse judicial corrupt in US they seem to be taking action kama jammaa huyu George Flyod Jameni kuua mutu kama ni mnyama. Black race fight your heritage wherever you are. Africa will be taken by China. In China Black skin not wanted yet we receive them like angels just because their skin is brown shame wewe tumia akili. Treasure your ⚫ blackness. Blacklivesmatter.

@ Kaswende, one key statement you said is that"Kenya is aworse Judicially... ".American judicial system is far more closer to being "fair" than that of Kenya on my - JustiMeter.
With all the negativity piled on American society,many world over "clamor" to land and live here from their "shithole" countries.Iam sure most of you have seen those boats full of africans sinking off the Mediterranean coast... You cannnt have them both.No country is perfect...
Some of you may recall a poll that indicated 70% of Kenyan youth would like to leave Kenya for countries like USA,,UK,despite their treatment on black people.Hey talking of treatment,how do black africans treat each other.Look no farther than Kenya for the response.

she really needs psychological therapy. The cursing words she is spewing out are not in order

First off...speak English. That is the official language in the USA! The dude from Kenya that was elected president nearly ruined our country, and is continuing to try from “backstage”. If you don’t like this country, please just quietly pack and go home to your wonderful shithole.

Sorry mathafacka kenya has over 41 languages and every one has a right to speak what they want sorry u have a language just like English and UK has the pure English so shut up and buy oxford dictionary.

I tell people, the moment these kaburus can speak even kiswahili, let alone our native tongues, then they can speak about how well we pronounce their words. Motha lova, I can speak both your and my language, unless you can meet me halfway, you can kiss my drift where the sun dont shine as they cant even speak more than only 1 language. So wnanachi, shrub all you want. Personally I like to shrub just to offend uptight a-holes like you.

AAH! She spoke truth to power. Now am happy to see this. This is the direction we Africans are heading. For those silent digital warriors and cowardly fools afraid of green cards, understand if you stand for nothing, you will fall for anything. There are over 101 countries in the world. Black Lives Matter and she is exercising her rights.
Those to scared, ignorant or plain hating, please STFU and let the doers do so you can later talk about them and analyze/criticise from your armchairs. Ngombe hawa.