Kenyan Ambassador to Namibia Under Fire for Engaging in Game Hunting 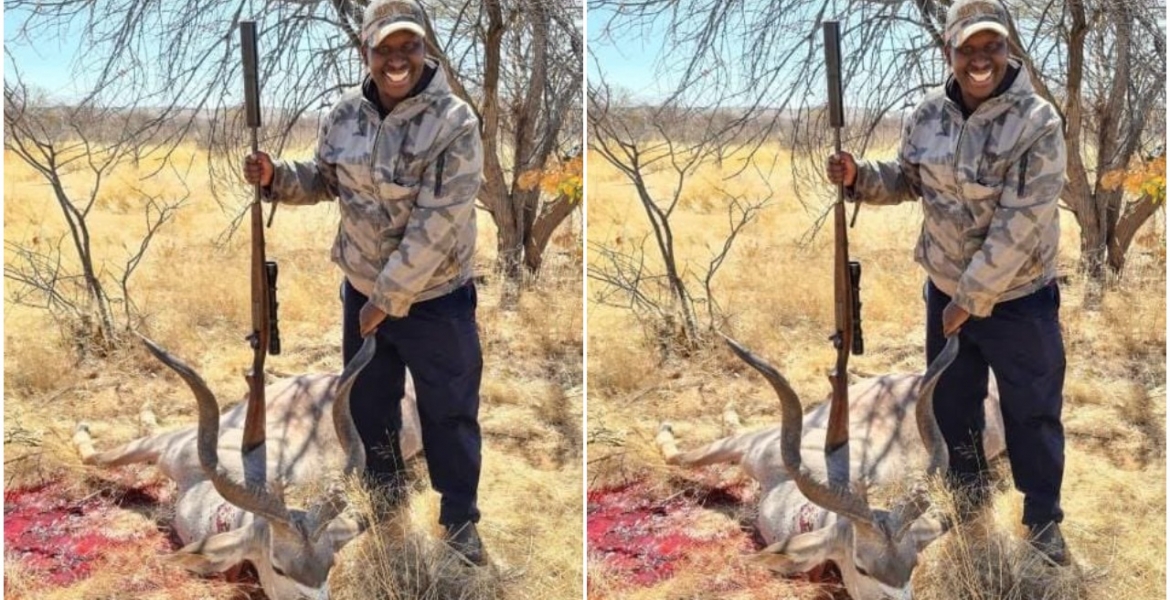 This comes after a photo of the diplomat posing with a slain Greater Kudu surfaced on social media on Monday, triggering outrage.

The photo shows Langat, who is wearing a jungle jacket, black trousers, and a cap, holding his rifle in one hand while the other is holding his kill by its horn.

Kenyans online expressed their displeasure at the needless death of the innocent animal and called for Langat’s dismissal for ‘embarrassing’ the country. Kenya prides itself as a sanctuary for animals, endangered or not.

They argued that being Kenya’s ambassador, he ought to hold the same values of his country during his service abroad.

Although Namibia allows game hunting, wanton killing of wild animals has been illegal in Kenya since 1977.

A gun is the man's cowardly way of asserting his dominion over others. If you're so mancho, why didn't you meet him mano a mano?

Shame on you ambassador . It is game for you but it does not represent the values of the country you represent and you should resign . How could you ? How dare you? you need to step down period

But Kenya government is full of such characters.

This is only game hunting whats the worry about

what happens when you hire IDIOTS.

I see a lot of self righteous comments here. Let the man be and y’all be yourself. Whatever he need whether right or wrong, he’s in Namibia where it’s legal. So all that holier-than-thou attitude on the comments is all hogwash.

If he makes use of the animal for food - a nice stew, mūtūra, ngerima, thenga twarīe, nyama choma, feeds the neighborhood, makes use of the skin etc, is that ok or is the problem the picture? Have you never killed and/or participated in the killing and consumption of a chicken, goat, sheep, cow or other animal and what is the difference? Do the domesticated food sources meekly agree to be killed and slaughtered? Newsflash - they don't enjoy the process. Which do you think is quicker, a knife to the throat or a bullet? There is a name for castigating others for enjoying something we do joyfully.

@Mundumugo I agree with you. Some of the people commenting here take it like they never had meat of whatever kind before. Well said, those ‘domesticated’ animals also do not agree to be knifed for their own pleasure. This animal is a prey and sooner or later it would have been torn to pieces by its predators.

Some of those complaining have paid $50 bribes each to Kenyan ambassadors abroad to get Kenyan IDs.Game hunting is legal in Namibia but bribery for IDs is an offense in Kenya and those western countries.Why complain of game hunt yet no one utters a word after cannibals led wauuaji Raila,Kabogo,Wanjiru,Owino,Obado kill Kenyans at will?

This moron is a Trump follower

This moron is a Trump follower

Africans plundering their natural resources. Do wazungus plunder theirs this way? Bure kabisa!

Game is hunting is for culling reasons and money earned goes to Treasury. Kenyans complaining have become so stupid due to fake liberal media spewing trash akina CNN. They cry for animals while championing abortion and other harmful practices like DNA manipulation by vaccines and transgender gospel. Diplomat has done nothing illegal. Be woke and not stupefied. Use common sense.

Namibia raises wildlife for high value hunting. This is no different to using any other resources and it is sustainable. Namibians protect the animals because they are valuable.
It also protects the environment, because without hunting, it would be turned over to cattle and the wildlife killed off because of competition. Millions of other animals, birds, plants and trees have a safe habitat and are not hunted. This is conservation hunting.
Kenya wildlife, on the other hand, is controlled and drip-fed by money from rich foreign NGO's and as a result, outside the reserves, Kenya's wildlife has suffered because it has no value to local people.
There are plenty of critics, but in reality, there are no starving conservationists...