My Life is in Danger, Miguna Miguna Says 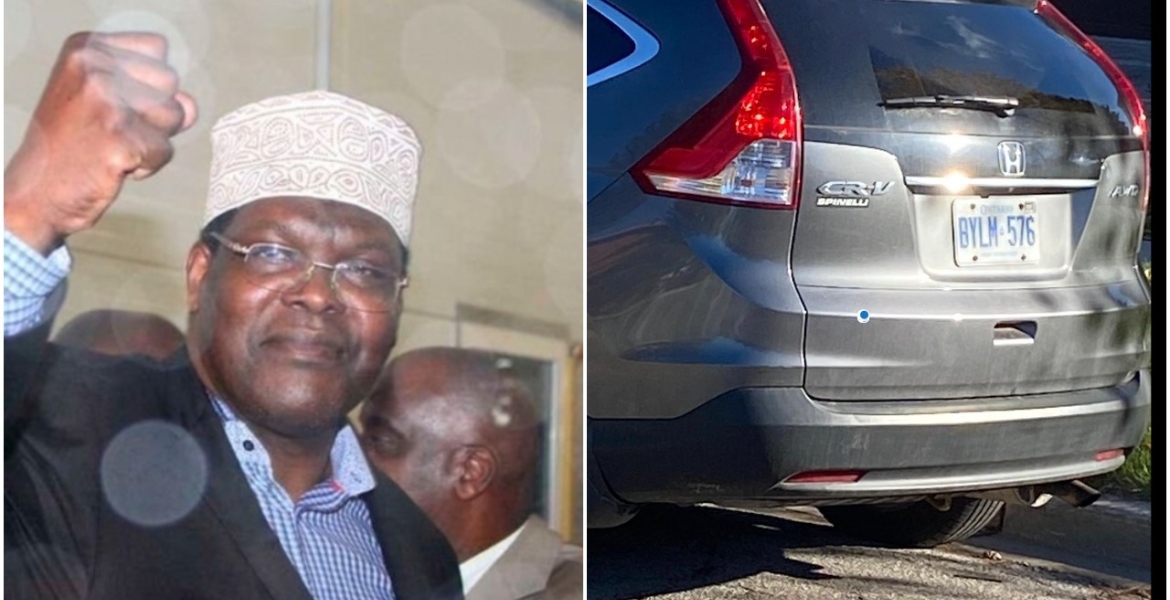 Kenyan-Canadian attorney Miguna Miguna says he is fearing for his life.

Through Twitter on Saturday, Miguna claimed that a grey Honda CRV bearing Ontario-Canada plate number BYLM 576 has been monitoring his house for the last two weeks.

Miguna, who was deported to Canada in February 2018, appeared to link the happening with his scheduled return to Kenya later this month.

He blamed the presence of the mysterious vehicle on President Kenyatta and ODM leader Raila Odinga, saying the two should be held responsible if anything happens to him.

Last month, retired Chief Justice Willy Mutunga said he will be traveling to Canada to accompany Miguna on his flight back home.

Miguna has already booked a flight back home and is expected to land at the Jomo Kenyatta International Airport (JKIA) on the morning of November 16th.

On Saturday, the fiery lawyer shared photos of air tickets from York Gate Travel, a travel agency based in North York, Ontaria.  “KENYA: We are READY and are ON THE WAY. Viva!” he captioned the photos.

This guy is now becoming a joke! Anyone who know alittle about motor vehicle registrations and police work in developed countries knows that this can be resolved in the morning. Call the police and get info on whose car this is! Am starting to think this guy seeks publicity at all costs!!!

Miguna! If you Die in Kenya? Blame it on the PSEUDO friend LAWtician (CJ Mutunga) who LURED you into the Country not very Long ago (albeit your Reluctance). Pliz: Follow you INSTINCTS!!!; not these Murderers😎👹👺😎.

He was not deported from Kenya.
He was removed from his home country.

Canada is bud home country! That is the country he pledges allegiance to since he became a citizen there! The damn lawyer can’t even figure that out.

He was not deported from Kenya.
He was removed from his home country Kenya by government of Kenya officials.

At first I thought it could be Dr Koni Hanene's vehicle trailing Miguna but then I remembered he has been in West African forests in the last six Months hunting for the elusive hominid fossils that has been linked to Nigerians criminal linked DNA. Also Dr Hanene lives in Switzerland not in Canada

It's simple as getting the info. required here,
https://www.apps.rus.mto.gov.on.ca/jtips/plSearchSpecDate.do?method=vie…

General really? You can get that.

Miguna is a dummy! He is a damn stupid fool! Who would be wasting as much time as this idiot if he has any brains!

If MM life is in danger while he's in Canada what would happens when he comes to Kenya? Mutunga should avoid this guy as much as possible he will ends up blaming him at all cost.

I am confused.
In the old Kenya constitution, you forfeited your Kenyan citizenship if you acquired a foreign citizenship. This applied to Mr Miguna upon his acquisition of Canadian citizenship.
However, in the new Kenyan constitution, dual citizenship was allowed. All one had to do was fill out some paperwork and viola. Your Kenyan citizenship was restored.
What I understand is that Miguna has refused to fill out the required paperwork.
Question to my fellow Kenyans, is the above narrative right or wrong?
If right, what is Miguna and
Muting doing or trying to prove?
Alternatively, he can enter Kenya with his Canadian passport. Only difference is he has to get and pay for a visa.

@Mkiratu it is true and Miguna was holding 2 passports since he was by corruption was given back his Kenyan passport by his Luo comrade Kanjwang who was minster of home affairs. Kenya has not charged him for that instead they have asked him to follow the procedure to get his Kenyan citizenship back but he has refused . He was brought the forms at the airport when he returned to Kenya but refused to sign . one has to declare has duo citizenship and there is a form for that purpose. But miguna thinks he is ABOVE LAW THAT HE IS SPECIAL. such fools end up in trouble .

Koti mbandia has ruled of what??

Same question here. I don't hate this man, but I also do not understand why he thinks he is above the law. We had to renounce and then reclaim ours back. What the heck!

This idiot need to be incarcerated. He has lots of mental issues just like any other lawyer in Kenya! He thinks he is by eater than any other being while he is just trash!

On the other hand, it's also likely that the car in question could be from local authorities. On the part of the local authorities, his anti-establishment views against the leadership back in Jamhuri could have led to them seeing him as a threat & chose to shadow him.

On the other hand, it's also likely that the car in question could be from local authorities. On the part of the local authorities, his anti-establishment views against the leadership back in Jamhuri could have led to them to seeing him as a threat & choose to shadow him.

!. Miguna refused to reclaim his Kenyan nationality which he had given back when he applied for a canadian Passport before new constitution. His Luo brother Kanjwang was the minister for home affairs . He fraudulently /illegally got his Kenya passport back
2.when he arrived in Kenya, he was brought forms to reclaim his Kenyan nationality but he refused. How could immigration officers at the airport allow him to enter the country illegally
2. Miguna thinks he is special . His stupidity, not using commonsense has put him in this position
3. One does not need a passport to buy a flight ticket and his Kenyan passport cannot be valid if he did not fill in those forms inorder to apply for a new one. Mutunga knows the law why is he trying to proof . He has to advise Miguna accordingly
he can ask the canadian police for protection but why would someone want to kill him .He is not a threat to Raila presidency . he is not a candidate . give us a break Miguna we are adults

This PR thing will stop one day

Put that stupid fist down! Your life is in danger my ass! I thought you have often said you are not afraid to die! Save us the nonsense you fool!

Who cares Miguna Miguna! You are not the air we breath in Kenya! I don’t know where you are leaving your home country of Canada! Your life was in danger there too!

This sissy Miguna Miguna damn lost his damn mind! Is this how rebellious general behave? Have some courage as you fight your self generated misfortunes. Don’t you have kids to worry about it?? That is where all your mind should go!!!!!

This ass fake General is afraid to die! Hehehe…...

last time I checked, if you acquired citizenship of another country prior to 2010 you, by default, had your Kenyan citizenship revoked. Dual Citizenship is allowable but YOU HAVE TO PETITION THE KENYA GOVERNMENT to have your Kenyan Citizenship reinstated. And it is not guaranteed you will get it. There are forms to fill, hoops to jump and supplications to make. UNLESS YOU ARE GOD ALMIGHTY. So spare us your whingeing. Get your papers right, MM!I will get the popcorn and settle in my worn rocker for yet another episode of "I am Not Boarding".

Wow! I have never seen a coward General who is now afraid to die! NEVER! Miguna is the first one! Do Kenyans really care about this fool??

Stop being a little uncut dick Miguna Miguna! Every little shit you blame it on Uhuru and raila! How fucking childish can you be motherfucker? Stop being an idiot with broad day hallucinations! You shouldn’t be allowed back to Kenya! We don’t care what the laws say! You are a foolish man!

Someone make sure Willy Muranga does not return to Kenya! Make him stranded in some airport for 40 days!

Shut the hell up Miguna! We don’t want you back in Kenya to cause your stupid nonsense!

Look at this foolish coward! Why would your life be in danger just because you Saw an suv parked by your house?? Who woukd want to kill a useless hobble fella! Save us the grief Miguna Miguna! Is this the kind of stuff you are alerting the whole world about? Stop You dirty bustard!

I hate a stupid man! This one is quite stupid if you asked me! He talks like a goat! Shetani huyu!