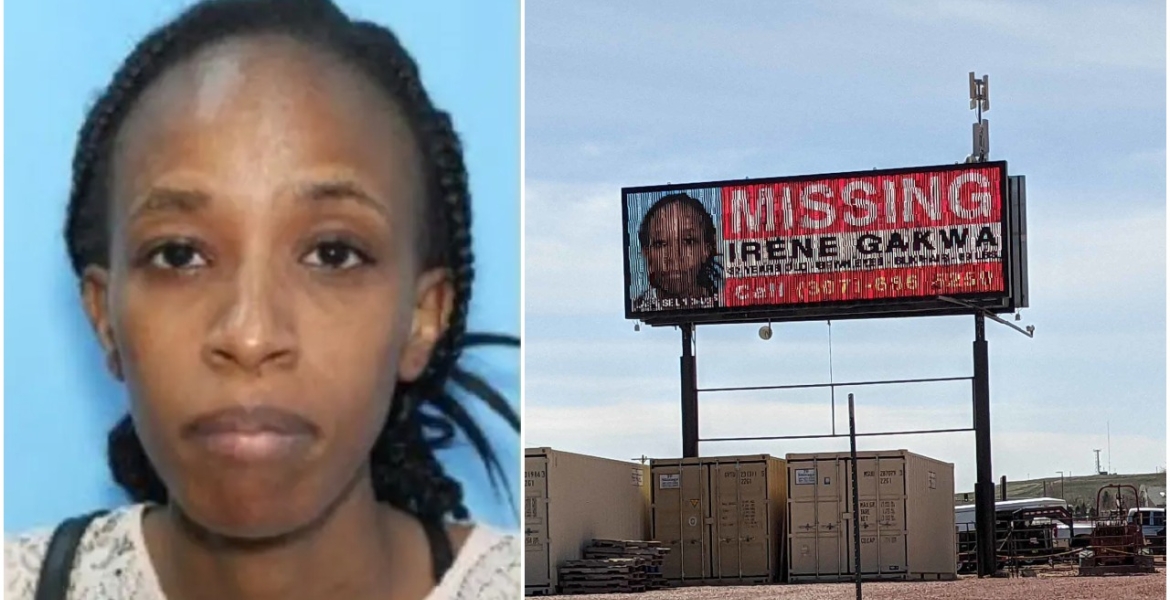 Police in the US state of Wyoming believe the boyfriend of a missing Kenyan-born woman may have been involved in her disappearance.

24-year-old Irene Gakwa was reported missing on March 20th this year and the last time she was seen was on February 24th when she had a video call with her parents, who live in Kenya.

Cowboy State Daily reports that Gakwa was in a nursing school and had moved to the city of Gillette, Wyoming with her boyfriend in July last year.

Gakwa’s boyfriend, who police say is not cooperating with the investigation, is now considered a “person of interest” in her disappearance. Investigators declined to reveal the identity of the boyfriend.

Officials from the Gillette Police Department say that digital evidence, including location data, has provided promising leads, one of which indicates that Gakwa may have been ferried to a rural area, mine site or oil or gas location in a passenger vehicle or crossover SUV between February 24th and March 20th.

Gakwa’s elder brother Kennedy Wainaina, who works as a pharmacist in Boise, Idaho, filed a missing person report after his sister stopped communicating with her family regularly. He told Cowboy State Daily that his sister would video chat with his parents in Nairobi almost every day.

Wainaina and his younger brother Chris moved to the US in their late teens to attend college but their sister remained and studied in Kenya where she also worked in the tourism industry. She moved to the US in her late 20s to join up with her brothers and broaden her experiences.

The brother says Gakwa studied and worked in Idaho before meeting her boyfriend on an online dating website. The two lived together in Idaho for about one and one-half years before the boyfriend suggested they move to Gillette and she agreed.

“We were all shocked. She was going to school and doing very well. We are a close family and have always kept an eye on each other,” Wainaina said of his sister’s decision to move to Wyoming.

Wainaina, who described the boyfriend as “controlling”, says his sister was struggling to settle in Gillette due to its small size, colder weather and the fact that she missed her family.

On March 3rd, the family received strange messages from Gakwa’s phone which announced her intention to relocate to Texas as she was unhappy with her life in Gillette. Her family said the texts were not in Kenyan language.

They also reported that her WhatsApp account was deleted on March 8th, ending group conversations with her family. A timeline provided by the family showed the last activity on her phone was on March 4th.

“I sit at home wondering if I’m doing all I can. I wake up at 3 am in the morning worrying and thinking of my sister,” Wainaina said.

Gakwa is described as a Black woman who is 5-feet, 1inch tall and weighing about 100 pounds. Anyone with information is requested to contact Gillette Police Department at (307) 682-5155.

So sad! I feel for this family. The boyfriend must be investigated/interrogated ASAP.

I truly feel so sad for this family, this doesn't feel right or good ending.
It's good to note, stay with your people, avoid dating outside your culture. People can be very Evil.

GOD have Mercy! Online dating has been DEAD Dangerous👺 for Years. But I wonder Why some of Us don't Notice. So sad😔.

@ Masono Bari, call me old fashioned if you want,but I like the idea of meeting someone face to face, forthwith before any forward progress starts.
My understanding is that afew success stories seem to give some people hope of trying this untested mode of meeting and mating. I guess to some the risk is worth it. Iam not insinuating that meeting in otherways is safest.No,the risk is in degrees. How many meet in church and end up killing each other...? But its still better to meet in church that online.

And how did you meet your Mexican woman? There are no Mexicans in Florida. Or did it all happen at the clubs when you were unconsciously drunk?

Wow Itake that as a Joke. There are Kenyans in Florida,so why shouldn't there be Mexicans there,considering the proximity to Mexico?
As how I met,her, actually she chased me.She saw my"omanyala like chiseled body" and has sleepless nights.The rest is history.

Why would a woman have sleepless nights over something that small you call “imanyala” for a 6’4” tall guy? You Luhya man got jokes! Heheheheeee!

Sometimes I feel sorry for the women but sometimes I don't. I can bet this was a Muzungu boyfriend because Kenyan women's mind closes up once they meet a muzungu who want to date them. It is as if they have reached heaven, the never think right again until the time mzungu want to take their life but it's too late then

What race is BF? Dating sites do not give full picture of an individual.

Most likely a white dude. She may have hang out with him until they started to disagree and of course he had to revenge all the money the lady has spent from him…

So sorry to read this kind of information. I have personally noted that when you read such kind of accounts More often they don't end up well. We have some very fun human beings who thrive on weaker sexes and their thinking and conclusions are fatal after the Act.

Our sister here met a bad seed, presuming the man is a mzungu and is responsible for her disappearance, that’s all there is. Remember that they dated for 1.5 years before relocation…is that not long enough to know someone? Or is it me?

My speculation is that the man did not want to be lefted. We have seen our own Kenyan/African men/boys deleting their partners after being lefted.

This is a tragedy. I still hope and pray that whoever is holding her, will let her live. Such a young and beautiful Kenyan girl! Please God let her live.

On a personal note, I try not to live in very small towns where you will likely be the only black person, most men drive huge trucks with confederate flags flying at every other stop…eeish!

@seneca - pass it on to your Kenyan sisters not to be spending those wazungu dollars if they have no long term interests in the guy.

Don’t play with Mzungu money because he will cut off your neck and keep on moving like nothing has happened. Money is the root of all evils.

The reason Kenyan men don’t date Kenyan women is simply because of the greed with Kenyan women. They want to live a high life which they have not worked for.

Kenyan women Wanahahanya hapa na pale and then travel to the next city to find greener pastures. It has happened many times. I hope you dont do that crap @seneca.

Dating sites for scum of the earth. Liars, druggies, ex convicts. Must do background check.

True. You have no clue who you are meeting on those lines.

@ Simama Imara, that appears to be the case here . Latest on this story is that the so called boyfriend is a criminal.

Just imagine the social isolation a black person would experience in an Wyoming hick town. Gakwa probably didn't know how truly racist America is till she moved there and the man was not going to let his African Queen be with anyone else but him. Stay with your own people whose culture you understand.

It is important that we so not rush to judge what we do not know. There are always two sides of a story, and there are thousands of times that police either did not get it right, or were walking the wrong moral path. Only with time and true proof will anything be answered. God sees all, and in His vision, the truth revealed.

If you look at the various police articles around this, there are countless different stories. This article says she is 24 years old, but other articles say she is 30, 31, and 32. The height and weight, as well as the missing dates. We should be careful not to blame anyone if police can't even figure out Irene's age.

@Jesse, I have noticed quite a number of africans shave off at least 5 years when coming to USA,and I would think even in UK. So if you saw other articles saying 30,31,32 you may be right.

How do they manage this? Isn't all that info on your passport and applied when you get your ss card?

@ Mundumugo, do you recall that story of an American women who left her husband for a Kenyan young man,and flew to Kenya to see him,and it was featured on Dr.Phil's show? The young man had varying ages as well.
What the passport shows is what they presented. Other documents like school certificate may have a different DOB. I could find out how they do it if Iam interested,but I know for a fact it happens.

Whether or not her social security has the right info wasn't the point. My point is the police don't seem to know, or her family doesn't seem to know enough not to give accurate info. That is a really weird thing. Why doesn't her family or the cops know her age, height, or weight enough to be consistent?

Terrible!, So sad, inhumane actions, raising alarms on online Communities, needs more secure connections and follow up as this is not the first case. Our today and tomorrow and ladies dating and connecting online, know the person you are engaging to, our today and tomorrow, you have a long life ahead of you, concentrate on your education and take your time to really know whom you are engaging to. There is always a first sign, when you first learn that it's not a real LOVE and it's controlling bargain on your life without hesitation.
So sad. We want safety assurance from the dating sites, as this where CITIZENS socialize and meet there future partners.