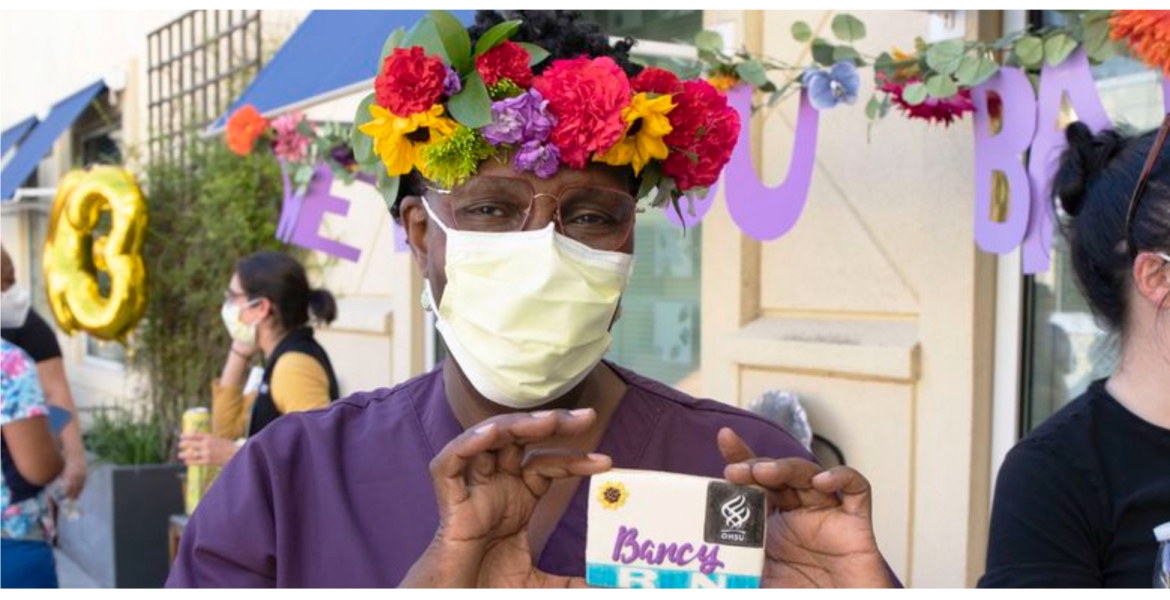 A Kenyan-born nurse has retired after working at Oregon Health & Science University’s (OHSU) Doernbecher Children’s Hospital in Oregon for over four decades.

Bancy Gatimu left the hospital this month after working there for 43 years, making her the health facility’s oldest and longest-serving nurse.

Gatimu, who grew up in Kenya, says two nurses who took care of her when she was taken ill with malaria at the age of six inspired her to become a caregiver.

“Two nurses there were so kind to me. They did everything for me. I just loved them. Because of them I dreamed of being a nurse,” she told The Oregonian.

She went on to graduate from college and nursing school in Kenya and became pediatric acute care registered nurse as she loved caring for children.

“When you love your job, it is not a job. I take care of children whose parents I once took care of. They see me and call me grandma from the hospital,” she adds.

After school, she worked as a registered nurse at a hospital in Nairobi but the hospital’s officials decided to assign her to work far from the city because she was single.

“That’s where nurses were needed. They sent nurses there who had no family ties. I worked closely with a physician’s assistant,” she said.

While there, Gatimu met one of the assistant’s friends, born and raised in Kenya, who was coming from Portland, Oregon to visit his parents who lived in the area where she worked.

“I met this friend. He was a teacher in Portland. When he returned to his home, we started a long-distance relationship. He later took a sabbatical. He came to me. We got to know each other. We married in Kenya, and we moved to Portland,” Gatimu said.

Gatimu and her husband Simon arrived in Portland in 1978 in the middle of a terrible winter storm.

“I woke up one morning and saw white stuff on the ground. I woke my husband up to ask him if that was what they call snow. I had never seen snow. I ran out to play like a kid. I took pictures and sent them to my family in Kenya,” she said.

She soon secured a job at Doernbecher which was then just a dedicated floor in the main OHSU Hospital.

“We had four patients to a room. When parents came to be with their children, we had to give them a mattress to sleep on the floor. Now we have our own beautiful building,” said Gatimu, who is about to turn 70.

Over the course of her over 40-year-long career, Gatimu has developed a strong connection to her patients, some of whom she has been treating since they were born. She recently caught up with one of the who is in his 20s.

“I have been caring for him since he was little. Back then he would run up to me and call me ‘mom.’ He still calls me that when he sees me. Some parents of patients who hear that are puzzled because he is white, and I am Black,” she said.

On her last day, the hospital management organized a retirement party in her honor.

“I said goodbye to the nurses and doctors. There are young doctors I worked with long ago when they were medical students and then residents.” “I love what I did,” she said. “I loved it,” she added.

Now that is what you call serving humanity for the common good. Best wishes Mrs. Bancy Gatimu in your retirement

I'm a nursing student, this is so inspiring ☺

Beautiful story. I love nurses. Congratulations to you.

Nursing in US sucks! The risks and the pay are incongruent!..the long hours,the arrogant physicians especially if your English is accentuated,the overbearing managers,the ungrateful family members, the ever complaining nurse aide, name it.You go home pooped tired,wondering if you get a call from manager about a missed dose,..

Tell them about arrogant and don’t care altitude of nurses in Kenya.They even beat women for being pregnant.

Stupid. How did she do it for over four decades if its that bad? You are just lazy. Who asked for your opinion? Shenzi.

kithoi!,she is just playing to the gallery. I am real mackoy in this field if you know what this means you dickhead.

Thx 4 keeping it real! Wanted 2 become one but now have 2 reconsider

yap 25 years of doing it after covid I am spent

Wonderful story all the best in yojr retirement,you must have looked after thousands of people over the decades.

Beautiful!!! Enjoy your retirement. You have all the blessings from the babies you took care off!!