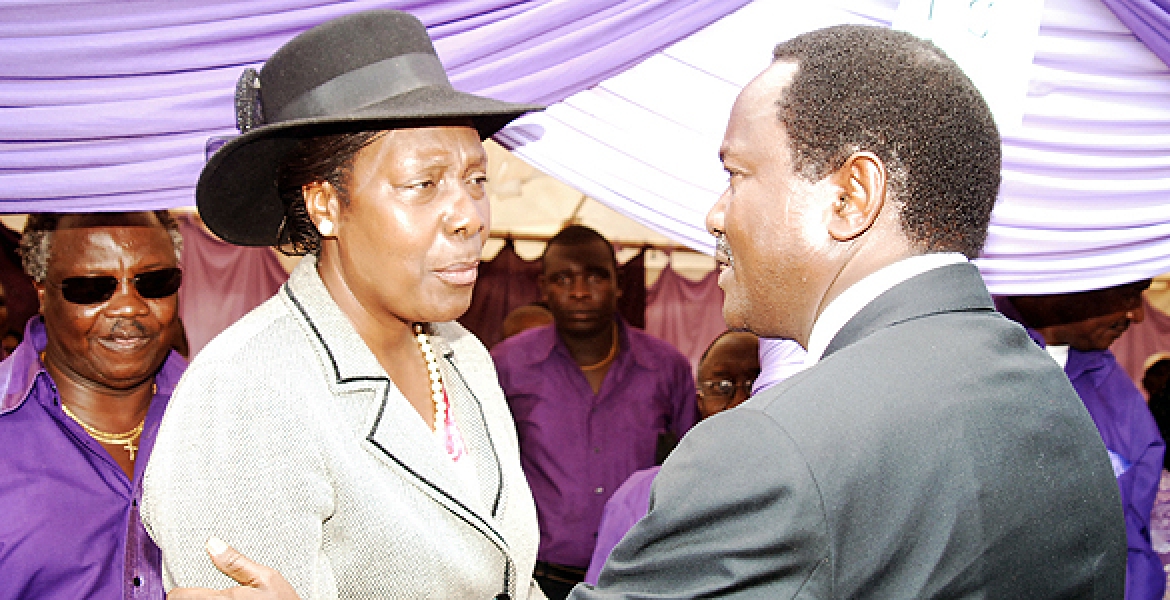 The former Vice President told Ngilu that if she was committed to Ukambani unity, she should have folded her party and join Wiper Democratic Movement.

Musyoka said that he will route for Wiper Party candidates including the Kitui gubernatorial seat in which Ngilu is facing off with incumbent Julius Malombe, despite Ngilu joining the National Super Alliance (NASA) under her party.

Kalonzo disowned Ngilu and openly drummed up support for Wiper candidates including Malombe, despite Ngilu accompanying him at Kabati market in Kitui West Constituency.

“I am happy we are all speaking in one voice as a community, but Wiper needs numbers in national and county assemblies and therefore  Ngilu being in a party that is in competition with us must appreciate that,” Musyoka said.

According to Kalonzo, Ngilu would have followed former Kathiani Member of Parliament Wavinya Ndeti who folded her Chama Cha Uzalendo and joined Wiper.

But Ngilu in a rejoinder said she had no problem with Kalonzo routing for Wiper candidates, “I have no problem with Kalonzo’s stand because it is not the gospel truth. He’s trying to market a very unpopular governor and he will be embarrassed at the ballot” Ngilu said.Kalonzo expressed confidence that NASA will form the next government and urged his backyard to rally behind NASA in the August 8 polls and turn out in large numbers to help them capture power.

“NASA is going to win this election but I don’t want to be a deputy president without governors and foot soldiers in both county and national assemblies to implement our agenda,” he said.

This is called a doomed political marriage of convenience......they are always doomed to fail due to mistrust,greed,cheating,suspicion,paranoia and lies.
The watermelon is not happy because he has been NASWAD.Just pay a little bit of attention and read his body language everywhere he goes for a political rally with the P.M. a.k.a. Prime Murderer a.k.a. Joshua Ojinga!