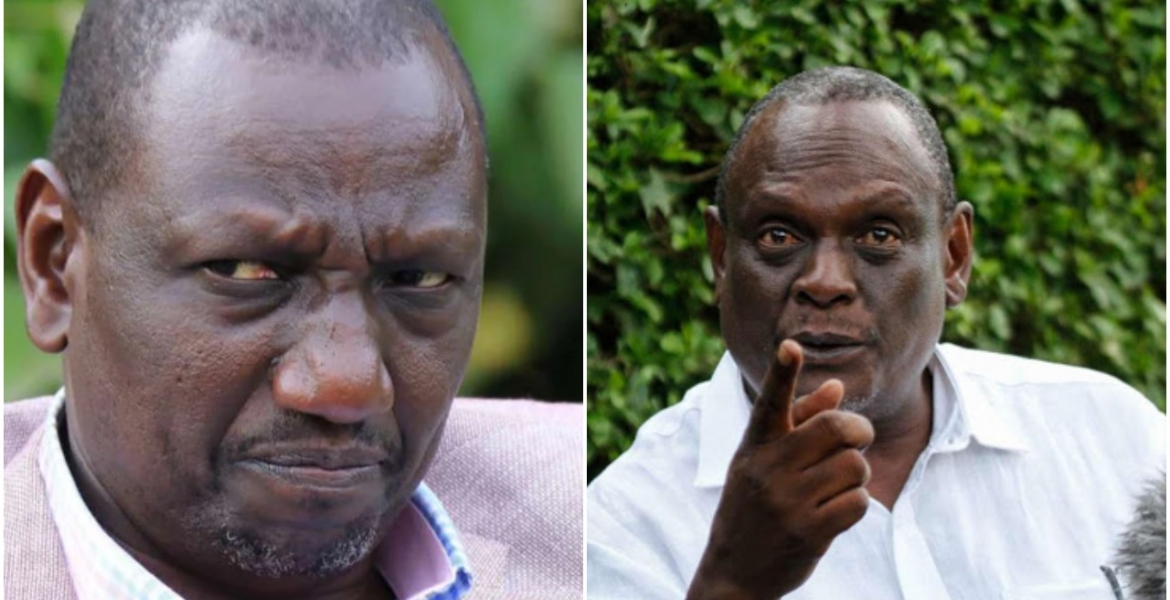 Murathe through Facebook on Friday said the move was an indication that the Jubilee Party had successfully managed to weed out what he described as “political leprosy” that has been attacking President Uhuru’s agenda.

“For a very long time, Uhuru’s Jubilee Party agenda has been attacked by a political leprosy by the name jubilee Asili. But, after massive fumigations, we have successfully separated and our focus now is delivery of services and ensuring we unite this country,” Murathe, a fierce critic of DP Ruto, stated.

He added: “We are therefore urging patriots to refrain from contracting this disease.”

Ruto launched the center on Thursday in Nairobi’s Kilimani area and hosted about 20 MPs who were recently kicked out of parliament leadership and committees.

The Jubilee Asili Centre will serve as a meeting place for DP Ruto allies who have been denied access to the Jubilee Party headquarters in Pangani, according to Elgeyo-Marakwet Senator Kipchumba Murkomen.

“It is the Centre for Jubilee Party members who believe in the original idea of the party, including the implementation of the promises we gave to the people,” Murkomen said.

Jubilee Asili has adopted the slogan “Sote Pamoja” instead of the Jubilee Party’s “Tuko Pamoja.” In addition, the outfit has replaced colors in the Jubilee logo and features black in the place of red.

Now we know where Arror and Kimwarer money is going.

Good for you William Ruto.

The future of kenya is secession.

We can’t support illegitimate government. That is unAfrican. We are Africans and we can’t follow Fake leaders.

Ruto is Dying too for Deputizing thieves a.d RIGGGERS. And he says he is a Christian (yet headed to hell Just like his uncle Nicholas Biwott).

Yes welcome back @Imara. Now you know very well this fella bought his doctorate. Is it not you who posed the question "Who would dare fail Ruto?" perhaps knowing what happened to Msado and now Kipyegon Kimei? The only subjects he can teach in college are "how to loot a country dry in five years or how to buy votes using the clergy or how to Nyama Choma human beings in a church or land grabbing and tear gassing "threatening" kindagateners in the process He would be teaching from experience.

Ruto is like a little boy fighting a toy that belongs and is owned by his bigger brother. He is an irritant and a “leprosy” that deserves to be treated with the discontent it deserves.

You are wrong! My English teacher, Mrs Beverly, told me I’m right! She is British!

@Nancy - you are correct! I was in Mrs Beverly’s English too and “discontent” is the word. These English learners wannabe wants to tell us they know the word usage better than our British teacher who spoke the Queen’s special English! The guy is not learned enough to understand these high tech grammar words. I forgive him and so does Mrs Beverly!

@mwangi - You misunderstood the entire context that @ Kiprotich was applying the word, discontent”. Please look at your English Dictionary and understand how the word is defined. Then try to use it in Kiprotich’s context and please understand his state of mind when he used it! I might add that you may be defining the word in a similar manner that you understand “shilling”! Meaning as a kikuyu, you have various definitions of “shillingi” as long as you bring “meat@ to your wife and kids! Right @mwangi??? There are many ways of killing a cat with 9 lives! And “discontent” is one way among the 9 lives!

All I meant @Mwangi is simply without putting any single thought into it! Your word “contempt” is not what I wanted to use. But it is a good word though!

Mwai Kibaki, Uhuru Kenyatta and Jimmy wanjingi as the leaders of corona infection.

As for Raila Odinga, he clearly does not understand Hate that is rooted in cultural differences.

Luo’s will be killed because of ignorance of their leaders.

Kalenjin have been killing innocent people in Kenya for a long time; actually since before 1992! YK92 - Ruto’s brain child killed many Kikuyus!

And you need to get your facts straight about coronavirus! It was a kale woman who traveled to Dallas and return home with the virus!

So, should we say that DP Ruto brought coronavirus to Kenya on the basis that the first case was a kalenjin woman?

Amazing the Kikuyus continue to feed the kalenjin community even though you have committed so many atrocities against the people of Kenya - do you recall Kiambaa Church where you killed women and children? How low can you god forsaken people can you go??!

It's a well known fact that when Murathe talk of uniting the country is actually talking about consolidating power within Kikuyu tribe through hook or crook like the previous flawed elections.
He's not talking about Kenya don't confuse that two.History repeats itself, this may be a recipe for chaos in Rift Valley again.
The foxy,cunning and sly behaviour of duping others to support a Kikuyu to ascend to power and then turn around and accuse them will not last.Ruto is a used tissue paper that Kikuyu had to find ways and means to get rid of.Mark my words,if Ruto was supportive of Uhuru,Kikuyu were still going to find an alibi to throw him out of the government.

I mean:Ruto is a LAZY man that Fights his Tools. Very lazy Man. Bure kabisa!

The fact that well educated Kenyans can waste their time discussing these known thieves is shocking. Are we so talentless and far removed from the true biblical morals? Keep swapping thieves and keep regular kenyans poor.

How do you know those commenting here are well educated? Are you well educated? If so why are you wasting your talents here! Right now you would have build a cabbage factory to feed the whole of Nairobi! Right @Thankful? Give me a few biblical verses that I can read as I seek the higher Kingdom! But I do know how you will do it not to waste talent here

History repeats itself. Is this the beginning of the end for Ruto? In 1992, the Original Forum for the Restoration of Democracy, aka Ford, split into Ford-asili and Ford-k, ie, Ford-Kenya, leading to Moi's victory in the general elections. Now we have Jubilee-asili and Jubilee-k,ie Jubilee-kieleweke. Whoever is going to be the next leader in Kenya is not in Jubilee now, if history repeats itself.

The cornerstone is now a disease. Let's see the number of votes Murathe will get in 2022.

Who told you Murathe is running in 2022? But he is telling the truth about Ruto!

Ruto will be the only guy to safe Kenya, mark my words.

Now I know that @omondi is peddling illegal drugs if he thinks Ruto can save Kenya! The high priest of corruption and other evils can’t even save himself in the process of him destroying Kenya! Ruto will auction Kenya for two pennies! He is money hungry bustard.

I don’t think so, he has good intentions and will take Kenya to a better spot and help the regular citizen. He has a good heart of helping people

Sorry that you are misinformed about Ruto. He is the greatest thief ever n Kenya. He has embezzles public funds! He has sanction killings of several people - Mwikali, Kenei, Juma, Msando, Yebei, etc. Any lazy person who is expecting handouts will praise Ruto for his conmanship and other crimes! Stand on your own feet, work hard and stop expecting free stuff!!