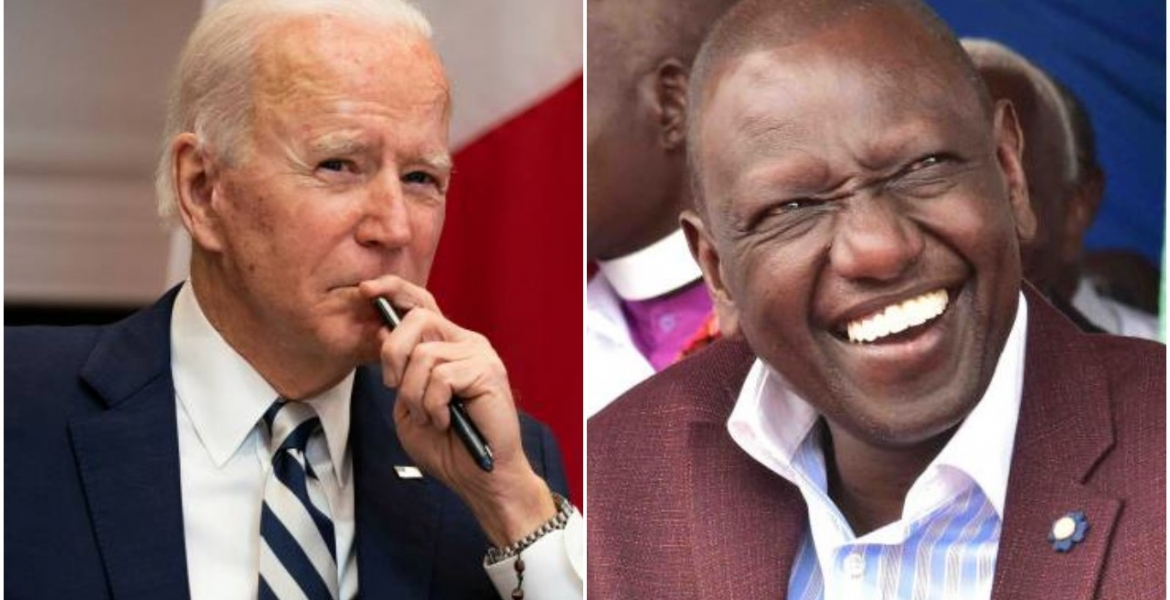 Deputy President William Ruto has continued to defend his ‘Hustler’ campaign ideology ahead of the 2022 general elections.

Through Twitter, Ruto shared a screengrab of US President Joe Biden’s tweet in an attempt to justify his ‘Hustler movement’, which seeks to empower low-income earners and change the country’s economic policy from the top down to bottom up to ensure resources get to ordinary citizens.

“Trickle-down economics has never worked. It’s time to grow the economy from the bottom up and middle out,” reads President Biden’s tweet dated April 29th, 2021.

Ruto shared the screenshot of Biden’s tweet alongside a tweet he (Ruto) posted last year and highlighted the dates on both tweets, possibly to prove that he is “ahead of the curve.”

Ruto’s tweet dated October 4th, 2020 reads: “Countrymen, finally the Wheelbarrow/Mkokoteni/Bodaboda moment is here. The discourse about; Hustlers not tribes; wananchi not leaders; empowerment of ordinary hustles not power for the few; ordinary hustler jobs not positions for the mighty’ from Bottom-up not top-down, Jipange.” 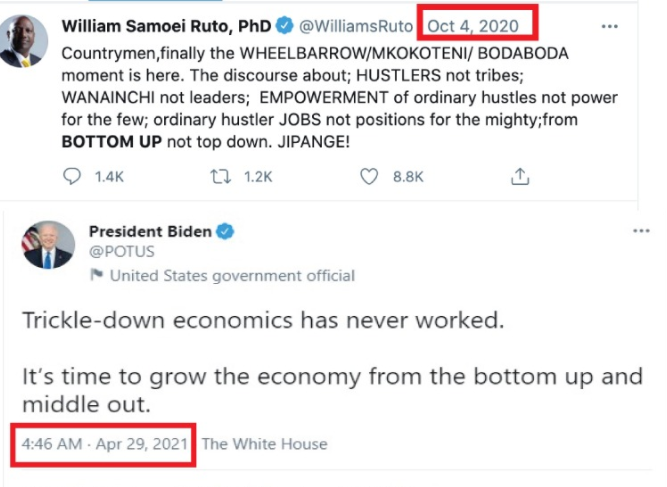 Ruto has in the past dismissed claims that he is using the ‘Hustler’ narrative to drive a wedge between the poor and the rich.

“When I say let’s empower the bodaboda rider and the mama mboga, by giving them government money to expand their businesses, how does that amount to incitement?” posed Ruto.

“The next government will be formed by touts, the bodaboda riders, and the mama mbogas,”  he added.

I know we have talked about this before, but I guess it is a good topic to talk about in this forum. I think that Kenya can also compete in this textile and garment manufacturing industry. We have many jobless Kenyans, who would see their lives significantly improved were this kinds of parks opened in Kenya. The industry employs multitudes of people so that it definitely a benefit in the Kenyan situation. Also I think that there is no shortage of opportunity in this industry globally because there is always a demand for good clothes and shoes. KRA would definitely make some good money out of this industry as well.Not to mention that the more Kenyans Get exposed to the industry the more they will take leadership and ownership roles within it.

The American situation is nowhere similar or applicable fo the Kenyan situation. You have failed to work with Uhuru to fix things up and now you are telling us about a lose lose hustler crap?

We have the biggest thief (Ruto) on the entire world trying to misquote what President Biden said to Ruto’s selfish advantage!

Ruto, return to the poor people all the money you have stolen over the years and then we can attempted to listen to your backward wheelbarrow hustler narrative! Stop misguiding the unthinking youth so you can destroy Kenya. Kenya si ya mama yako! Nonsense!

Ruto - Kenyans are not as stupid as you think! Wacha ujinga and your two cabbage politics! Stupid!

Copy and paste Nya-meno. You will never be president.

Ruto ni Mukora kushinda Shetani. He will take Kenya to hell should he be voted president! This will be a day nobody want to see come!

Is the drunk leader trustworthy or it’s only he speaks your language?

@guessy - He speaks my Swahili National language! And if that is not good enough because of your insecurities, to hell with your damn language which it might be you sick idiotic puppy!

What language does the murderer (Ruto) of all times speak!? Tongorer?

Stop lying to us Ruto! You know damn well what you are saying that the touts, bodaboda and mamamboga will make the nest government us a lie!

That specific group of “ future leaders” do not have the education and the know-how to form a government! You are cunningly talking about yourself as part of them to gain some support and get votes!

Your ICC unresolved case of killing humanity is giving you sleepless night.You want to get to the big office to protect yourself from possible prosecutions! We all know that Ruto.

The only thing you want from relatives of those you killed and now hold the dear are the votes and then you dumped them on the way side as you expand your thievery expeditions without much resistance! Come on Ruto, get your big dirty teeth out of here! Liar, liar, liar!

Please Ruto put your big white melons back into your dirty mouth! Biden did not mean what you think! Your fake PhD is misleading your crowded mind! Kenya is not for sale! Neither are the Kenyans themselves at William Ruto’s chicken market!

“Hell is empty and all the Devils are here”! Ruto is the biggest devil of them all! Don’t be devil by a big DEVIL because he will devour you at the end! End of story!

Haaii!!! Some of the comments here are either uninformed or are politically biased. With the internet, there is no excuse for not knowing basics in any area of knowledge. And it should not matter who states a fundamental truth...even the ones we don’t like. We Africans are pretty good at knowing how to deal with this...we will normally say, “ hata kaa huyu ni mutu bure, hapo amenena ukweli.” We are intrinsically smart about such things. This is a well founded economic principal. Trickledown economics in capitalism never works in the long run. The best way to grow a strong economy is to lift the bottom poor who are generally the majority and to grow or horizontally widen the middle class.

Ask Ruto to start giving the poor everything out of everything he has stollen! Talk is very cheap! Let him set a good example and all the middle class will give everything they own to the poor!

I have no spokesman so these tales of WE or US KENYANS are false.There are some fools who believe Kenya and Kenyans belong to Uhuru and Raila.They also believe the two crooks can loot anything and that Raila has the right to kill anybody.The truth is economic growth can only be achieved if we empower those at the bottom.It’s total rubbish to even think BUILDING a few BILLIONAIRES will help Kenya.None of all these elite thugs including jambazi Ruto will change Kenya .

We may not like Ruto as much but he is the man to beat in 2022 n so far no other idiot have shown he/she can beat him.The guy is very very popular take that to the bank n chances of him bin prezzo is above 90%

Your silly opinion and yes your foolish assumptions! Ruto will never be the president of Kenya! Yes, kales will vote for him, maybe 1/2 of them and that is the Bolton line! Nobody else will voter for your killer friend! You are very blind to start hallucinating about Ruto presidency! He is a tribalist who have murdered ordinary Kenyans regularly! We will fight hard to make sure a killer does not take the reigns of power in Kenya!

I'm betting 100 USD he will be president. He will get 60pc vote or more. His main competitor mukisa kituyi will be a close 2nd. Raila isn't running. Dynasties and kalonzo are just babes waiting endorsement. Hustling narrative is working magic.

Looks like this upcoming campaign is going to be a robust discussion about the economy. About how we are going to create jobs for the jobless in the country.

You either tell us about the arror billions you pocketed and the kids and mamas you grilled in kiambaa church or you Shut up your filthy mouth .

Ruto the copycat lifted the phrase bottom-up from US campaign trail. Sanders used that phrase a lot and so the copycat Arap Aror wants to pass the phrase as his own original creation. Bure mwizi.