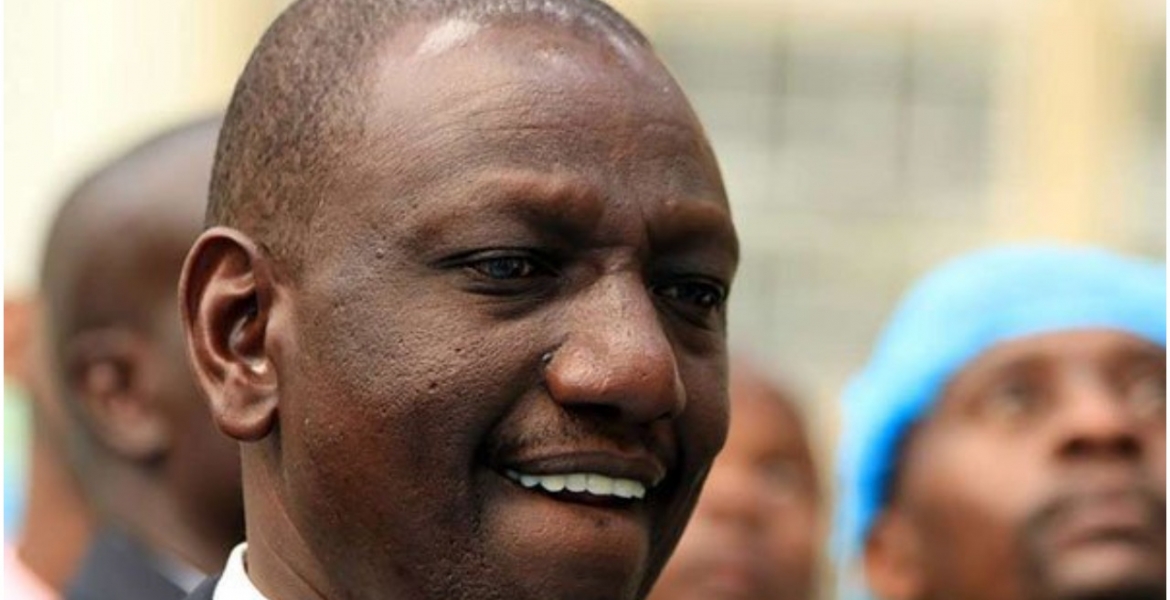 Deputy President William Ruto has responded to reports that President Kenyatta will endorse one of the Nasa principals for the presidency in 2022.

Reacting to an article by The Star titled “Uhuru: I’ll Back One Nasa Chief for Presidency”, Ruto appeared to suggest that it would be unfair for Uhuru to ignore those who backed him in the past.

“EUCHO!!NGAI FAFA MWATHANI!! So, what happens to the Thurakus, the kumìrà kùmèrà contingent, the 8 million of us?? None, no youth, no woman, no man of the 8M who woke up early and voted 3 times for UK/WsR ticket merit support? Sawa tu! Tutajipanga na support ya MUNGU,” Ruto said through Twitter on Tuesday.

In a separate tweet, Ruto wondered whether the ouster of his allies from the Jubilee Party was part of Kenyatta’s plan to support an opposition candidate.

"So, was the destruction/dismembering of Jubilee, a national party, meant to pave way for support of regional/tribal parties in Nasa? Now, with the collapse of Jubilee, isn't it fair for those who can't fit in ethnic parties to build UDA as an alternative national party? Ama?" he posed.

In the article, The Star reported that Kenyatta asked Wiper leader Kalonzo Musyoka to unite with other Nasa principals, hinting at supporting one of them.

“Steve (Kalonzo), listen to your people and what they are saying. Unite in Nasa then we shall see what will happen. Whatever you will agree on is what I will go with,” The Star quoted Uhuru.

He was speaking on Monday at State House, Nairobi where he hosted a delegation of Ukambani leaders led by Musyoka.

The writing has been on the wall for a long time.You have endured public humiliation and practically being replaced while still collecting a salary befitting a DP only by name.Resign and concentrate on UDA not that you will win but at least then you can gather what little pieces of dignity you have assuming you had any in the first place and run on your “hustler” ticket to Sugoi.

He brot the destroyer inside his bedroom n shit started n he was warned by many experts that this old guard is known kila pahali anaingia that particular house/party must come dwn.Uhuru u have 15 months left maliza Kazi urudi Gatundu via thika rd.The best thing about the Gema community is we don’t follow what our leaders tells us to do.Wr known to vote for our choice n we easily kick out somebody if we don’t like u compared to people from the Lake side who r told to follow this n that n they do it like ants.2022 wr voting for a young president below 55 years simple.

Jubilee now a total empty shack bec things didn't go to plan. It's a historic destruction of a successful party after single use. Whatever Ruto did to Uhuru must be huge!!

UK can support whoever he want but the voters have the final say. Going back to my corner for my chill 💊.

Man UK has one vote, I mean who cares who he voted for,his children are not registered voters

So @kui, was it unbelievable to you when Ruto killed women like you and your own child in 2007 inside a Kiambaa church?

The president is not misguided @kui. Ruto killed our people in 2007. How old are you to forget the children and their mothers that Ruto burned alive in a church building? Come on now!

That’s very very true. It amazes me to see how people have short memories. Ruto ni Yule Yule…give him the power and you will see what more he can do. Will never trust Ruto…. I will never forget the innocent kids and women you killed … people seeking refuge in a sacred place…CHURCH.

No one betrayed Ruto. He is betrayed by his own greed and thoughts that Kenyans are stupid. You cannot ‘OVER’ steal!! If you must steal, do so in moderation and leave some for development. This not so smart dog steals EVERYTHING, including from borrowed funds! Stealing from himself. Mtu huyu kumbafu kweli.

I still think most Kenyans are very stupid because they have allowed themselves to be deceived by Ruto with shitty wheelbarrows!

Ruto is a total package of Moi and he will kill at will if elected president! Moi fully trained Ruto for that killing mission and Ruto has done it without apology! Most Kenyans are very stupid! Just look at Wmuchomba and those MPs jumping the ship to Ruto’s little boat! Don’t you think thee goons are stupid? Yes indeed!

Ruto supported Uhuru. Yes, but Uhuru never WON any of the 2 Elections. NEVER! Rigging bulldozed him to "predidency".

We don't want Ruto, we don't want Raila and above all we don't want Uhuru Kenyatta telling us who will be our leader come 2022. That is our constitutional mandate - Wanjiku's power guaranteed by our constitution, and is none of Uhuru's business beyond his single vote that he can give to whomever. This man had a duty to fix all the messes his father left behind in this nation. Instead he decided to drink and get himself fat. He did nothing. Our land policy is a disaster. How can some people have thousands of idle fertile land fenced up when a lot of wananchi don't have even a small plot to put up a shelter for the head - are you kidding. These dynasties and thieves ought to have been gone by yesterday. You did nothing for all that perished in MAU MAU war, fighting for the freedom you are enjoying today getting fat. We were never taught about our heroes and heroines, nothing at all. You wanted us to forget about them because you took over after mzungu and became the scavenger he was - what a shame?

No one need pass sympathy to Gikuyu's. Just like every other Kenyan, Uhuru has just one vote. He has a right to give it to Raila.
As for whoever will be the next President of Kenya, it is in Wanjiku's hand not the Dynasties. Alot of Kenyans have suffered under the Dynasties [ under first Kenyatta; under Moi and under Uhuru].
Kenya is ready for young blood that is not contaminated by excessive greed,corruption and raw power.
Since Independence, Kenya has been on the wrong path. It's time for for all crooked paths since imperialism, colonialism and neo-colonialism to be made straight. This cannot be done by Dynasties. They have been enjoying the suffering of Wanjiku.
Let the best candidate win because of their character and what they have achieved for our country.
This time, imposing a leader on Wanjiku will be impossible. God is on our side not the kaburu's and his homeguards!!

Now this is hiw wars start.
Simply said, you can not trust anyone in politics in Kenya.
REVOLUTION folks REVOLUTION.

Few days ago Muturi wore the brown whatever and sworn in Muranga.

The political game in 2022 is between RAO Vs WSR. Kenyan have to choose between fire(WSR) and frying pan(RAO)

What is new here Ruto! You must be the most stupid fella in the world to think Uhuru was gonna back you up after dragging him to The Hague and back! Ruto does not deserve anyone’s backing to be anything including the chief herdsman in mogotio.

The best place for Ruto to be is that little bush place called Sugoi raising kienjegi Kuku after 2022. Ruto is not a presidential material no matter who would couch him for that job!

Ruto harvest what you planted period

Those days where you pour stolen monies to churches are gone. Take note nowadays the Kenyan judges are retrieving back all looted plots like ones of your god father Moi

We the kikuyu nation will follow every cue given by Uhuru against voting for Ruto who killed our women and children in 2007!

Ruto is a man who grew up without a male parent in the house! Fatherless guy like Ruto shows all the signs of a boy with poor upbringing and bad habits. This is all the reason(s) he has been undermining Uhuru since 2013.

Those Kikuyus following Ruto around like hungry dogs are the sellers who are out to get his stollen money, but they all know voting for Ruto means death and more death to our people!

Why trust a Mlevi? Why?

🇰🇪🤣🤣🤣Guys Guys I support @mwororo that we need anybody new like Martha karua/Ekuru Aokot/amp for kikuyu ichngwa/Didi nyoro/Sakaja/Me mkenya halisi.Vote for me n I will clear n forward all the corrupt within 6 month.With the hell of kwekwe squard I can assure you I will restore Clean kenya for Wanjiku.@Mwororo can u b my deputy🤣🤣

@Mkenya halisi, am with you every step of the way. We have a country to safe from the jaws of corruption and reckless leadership.

Please remove Karua out of the list! She is on her menstrating periods 24/7 which is not good for Kenya! This woman is not all that sharp to lead a country.

I get sick and tired to hear of the same old corrupt people who have destroyed Kenya showing their dirty heads to lead kenya into a bigger ditch!

Ruto should first of all retire with Uhuru. He is a confused fella working for himself. He is a thief and every body knows it!

The rest of them are useless crappy folks who have stolen enough. We need someone with a clear vision for kenya! We can rise money to support that person!