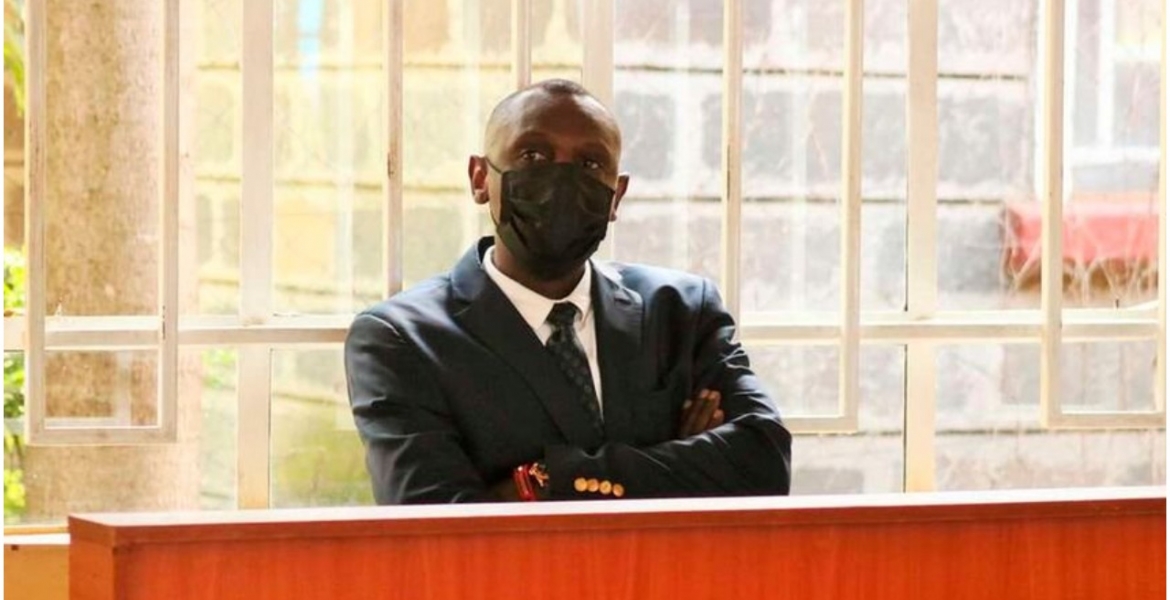 In an affidavit filed in a Nakuru court, Kibet said he is jobless and does not have a source of income, adding that he depends on friends and relatives for survival.

Kibet indicated that he can only cater for his two children’s annual National Hospital Insurance Fund (NHIF) fees and wants them transferred to JK Primary School, a public institution in Eldama Ravine, Baringo County.

“I am financially strained at the moment and [unable] to offer more than what I am offering here and the applicant, who is my immediate neighbor at home, knows this fact very well,” said Kibet.

He also told Nakuru principal magistrate Benjamin Limo that he was suffering from depression and was recently discharged from a rehabilitation center, where he was undergoing treatment for alcohol addiction.

Kibet denied ever marrying Jeruto and living with her in Kenya and Switzerland, arguing that he was not sober at the time they were in a relationship that led to the birth of the minors. He also told the court that he is a divorcee with two other kids in the US.

“As a result of my depression diagnosis and the resultant loss of business, my personal finances have been greatly affected to the point where I depend on the goodwill of my friends and relatives to meet my immediate needs,” he added.

Jeruto, who unsuccessfully contested for the Koibatek Ward Representative seat in 2017, is demanding Sh1 million per month to cater for food, rent, education, entertainment, and maintenance.

Jeruto claims they got married in 2008 and had two children together before they separated in 2012.

DNA tests confirmed that Kibet, who is the son of Moi’s firstborn son Jonathan Moi, is the biological father to the two kids aged nine and 11.

Join the 4 guys who were working in the quarry if you are jobless. Wahuna humbira nda.

Am sure she targeting the money as she thought since he is Moi's grandson he was overflowing with cash. Typical gold diggers mentality.

🙄🙄🙄 upkeep for 1m? Kweli boy child is on his own. If I may ask is this woman contribution her share of 1m monthly upkeep? They procreated together so hi biashara ni 50/50. Provision for the children should be made a shared responsibility and only then all these kind of nonsense will stop NKT!

Talk to the carniving DP Ruto kid! He is the one who stole all your grandpa’s land and money!

He might could give you a free wheelbarrow to go carry kokoto at one of the Mogotio quarries in your neighborhood and push it to Sugoi to build a chicken pen there!

You can enrich yourself with Ruto’s matako-down-nomics that he is preaching in central Kenya to confuse our kids! How come he did not tell you about that matako down theories of theft and murders?

How does a Moi grand kid claim to be broken? Who is your damn father dude?

Bwana asifiwe as Ruto gives you a don wheelbarrow to use it as your moto!

There you go @nyina wa chege!! I know a near by quarry depot I can take him to grind and pick kokoto once Ruto gives him a free wheelbarrow! I’m in Sugoi!

You folks who are attacking the woman, please familiarize your self with family laws. She is doing nothing wrong. The upkeep amount/child supports, is based on the earnings of the non custodian parent.Obviously,its helps alot to have a good lawyer.On both sides,Imight add.
So if the courts ruled that this fellow,Moi should pay 1m amonth,its within the law.If you have any beef, it should be directed at the laws pertaining to family.If the situation was reversed,and the woman was to pay the 1mil,would call the father a male gold digger?

@maxiley, do you believe in Kenyan lawyers? They are worse than the second wife! They will leach him completely dry and then move over to his lost wife to make more money! Engaging a lawyer is just like getting married without knowing when the divorce will be due! Lawyers like to delay cases to make money.

One million shillings monthly support is excessive! No wonder the guy is sick! The woman is making sure she can now rest without doing any work but a million will be coming in every month! It is just a huge business during children with a Kenyan woman, and especially for a man of means like you @maxiley!

It used to be a prized possession to have a child in Kenya but not any more!

Obviously there are both types of gold diggers - male and female! But the female gold diggers are well trained in Geneva Switzerland where the world’s money is minted!

You can help him pay since you make $10k a month dude!

Who will give him $10k? @maxiley??? I don’t know all about that, but @maxiley have claimed that Moi is his biological father! So this guy is @naxileynephew! That was early last year when COVID 19 emerged from China! I don’t know what @maxiley would say now since we got many covid19 strands all over the place! But I still think he will continue to claim Moi as his father until he get the inheritance of land and money! Then he can bail his nephew out! Sweet!

$10k is not take home, the feds take their cut 1st(the state and city come next if you don't live in Florida or Texas) then medical, 401k etc. After that there is rent or mortgage, utilities, cell phone, car insurance, vehicle maintenance, groceries, gas(fuel), clothing. Then you get to more discretionary things like cable or satellite, entertainment etc. Don't forget sales tax on most items in most states. In Kenya, it sounds 10k sounds phenomenal but life ain't cheap in these United States. Btw I'm not saying it's bad, it puts you in the middle class.

If we’re this guy’s father, I would wrap him up and tie him under the belly of a helicopter and drop him off in the middle of lake Victoria to swim back to the shores as a real man!

This one is an utter shame to the Moi larger family! Your grandpa is the riches man in Kenya but you seem to have squandered all that stolen wealth! Shut up and pay the gold digger pursuing you! I’m broke my foot!

This Moi family child looks like the Kapseret MP Oscar Sudi! I think Sudi has some exposing to do here!

@kirui - Then he should go to Oscar Sudi and ask for some help! Sudi is the keeper of all the Ruto stolen money!

He will be happy to bail him out with about 10 wheelbarrows to help him raise the money their greedy sister is asking!

It is all a woman eat man society! At least it has recently turned out that way! He dipped her twice and now she is royally crewing him!

I wonder what Moi would think about all this from the grave!? Well his uncle Gideon is still a billionaire! He can jump in and help! Ana??

They are both cousins from the same father, Oscar Sudi!

Do you say Oscar Sudi is the father to this kid, and himself too?

Well, I’m just laughing…… but I think Sudi can as well be cloned by Ruto to father himself and a 👧 kid! Billy Jean type of fathering by Micheal Jackson, you know…..

Look hia young idiot, ur father Jonathan was very well known for large parcels of land he either bought or my good guess stole n upon his death his family, that includes u got a share of the wealth. Tell us where u hidding the MOI money or we will fimbo u. U brought kids to this world to graze on grass while ur ass is on nyama choma. I believe this woman is a gold digger as 1million is alot of money n what she bringing in, but u must have shown her the wealth for her to demand that from u. Tingiza fimbo ya Nyayo stop being the black sheep of the rich ass Moi family.

Here comes another of your sisters agitating for your old grandpa’s money! She know the whore where your Dow is kept! She and her family of sisters wants some of that money!

Kweli wakale have become damaged goods and greedy! Surely Ruto has totally damaged this community with corruption, greed and theft!

Gold digging is a past time for evil women. Judge must look at incomes b4 issuing 1m directive. 1m is celebrity level amount. Beware of these jezebels

Well! The kid is still a celebrity! Moi was president for two decades plus! Making the celebrity status permanent! His child support is configured by the status and not his current personal income! That is what the gold digger fool should be arguing in court - the celebrity status…..

Kshs 1 million per month is too much for two kids support! That is $10k in America! Anyone making that kind of money in America is living a decent life! And this where we all agree she is a gold digger! Kshs 100,000 will be stretching it!

If there is anything I learned in my twenties about women, it is (1) it is cheaper to keep them when kids are involved and (2) If you scorned them in the past, you haven't seen hell till she unleashes it on you in a messy divorce. Ask Alfred Mutua of Machakos County.

@kibe - it seems you did not learn much in your old age! All you do is deck them and run! If you can put a sinker on the neck to sink them; do it!

Mutua come out alright because was come we stay type of arrangement! He never married Lilian! So she came out with what Mutua decided she will take on her way out of the damn door! Not much though! Never give an example of a man you don’t even know!

Let Cheruto try and recover her money stolen by muuaji Moi.Most of you seem to have received refunds from jambazi Gidion.

Collins Kibet Moi, has never worked a day of his life. His grandfather MOI stole enough and passed it on the Gideon,Jonathan etc..
Jonathan (RIP) left his money to Collins Kibet Moi and other siblings.
I believe 1 million KSH is extreme, but he should be be able to afford decent housing and schools for his children. He shouldn't pay spousal support because his ex.has a job.
I will repeat what I have said before...
You cannot divorce your kids from your life...PERIOD.

All the money yr grandfather Moi stole from public Will one day return so lipa hio child support buda.Let’s see you working as a tout if ur broke