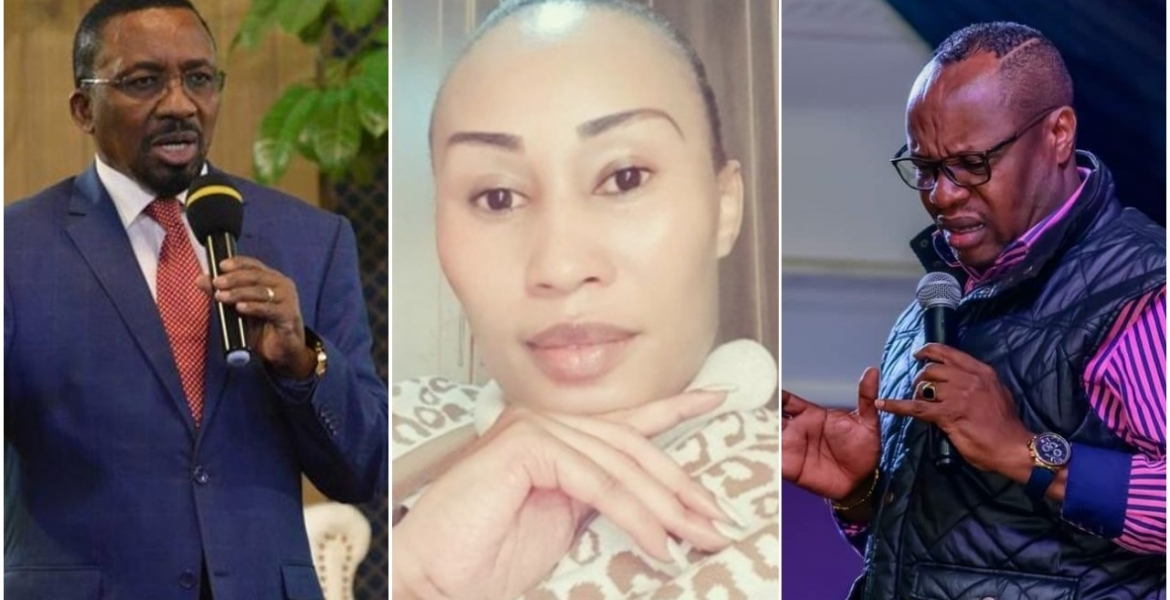 Pastor James Ng’ang’a of Neno Evangelism has defended House of Grace Bishop David Muriithi, who is embroiled in a child upkeep case with his former lover Judy Mutave.

Ng’ang’a urged Kenyans to stop condemning Bishop Muriithi for having an extra-marital affair with Judy, saying the woman may have been sent by the “devil” to put the man of the cloth into temptation.

“Kama ni mimi namshtaki kortini kwamba amechukua mbegu yangu. Mnaonea tu pastor (I would sue the lady for taking my seed because now everyone is condemning the pastor for nothing),” Pastor Ng’ang’a said during Sunday service at his church.

He added: “Sometimes it is good to pray for pastors not to fall into such temptations.”

The clergyman initially admitted to siring the child and agreed to provide support before he changed his mind and demanded a paternity test. His lawyer Felistus Njoroge told the court that the Bishop only admitted to having an on-again, off-again relationship that ended in 2018.

“We seek for a DNA test as my client has only admitted to a relationship and not paternity as the defense has claimed,” said Njoroge.

Muriithi had told the court that he was ready to provide Sh10,000 as monthly upkeep for the child, arguing that he has no regular income and only relies on well-wishers for support of the church and his family.

pure stupidity from an imbecile

This is exactly what is wrong with the Church today! Utter glorification of materialism by preachers of the day is weirdly strange!

This is exactly what is wrong with the Church today! Utter glorification of materialism by preachers of the day is weirdly strange!!!

This man killed someone in an accident and then bribed his way out of it. He’s in court for swindling someone out of his money. Is he saying those people are devils who came to tempt him and do killed one and took the money from the other. That’s the problem with so called men and women of cloth that are ignorant to the core. Nganga has no shame. Neither has the devil.

Shame on you Nganga. Are you telling us when you killed someone in an accident and bribed your way out of it, the woman who died was a devil tempting you and so you had to kill her? Are you telling us the person who sued you for swindling him 3m is a devil who tempted you with money? Are you the defender of adulterous so called bishops? The problem of the church are preachers like you who are ignorant and unschooled and who interpret the scriptures to their own gain. I wonder how men and women follow such uncouth leaders whose only path is to Jehanum.

Birds of the same feathers.If I were Ng'ang'a, I would stay away.By speaking,which he has aright to of course,he has stroked some fire.For example,when he say,the woman was send by the devil.My question to him is, "where was Jesus,to protect the man of the cloth?".Could it be that Jesus does no involve himself in self induced problems,as a teachable moment...?
And folks, lets not pretend here. It does not matter if you pray 30 times aday.If you are aman, you are going to be attracted to women.Even if you are married.Nothing devilish here.Order of nature.That is unless you are gay.What you do after the attraction is what puts most men in trouble.Therefore if the preacher lacks self control, it has nothing to do with the devil,but his decision making process,which he should work on.Not pray on.Because Iam sure he pray,and hoped this mess would go away...

Mwakilishi does not post my comments..waache ujinga.
Pastors job is to preach, and he gotta eat. He is doing his job, wewe kazi yako ni kusikiliza neno. The problem with people is that they are jealous of the pastor,his flashy clothes and cars. Kama haupendi, take your money somewhere else and stop complaining.

@ Tumia Ubongo,Iam assuming you are a pastor,or a seminary student.If you are not then you are afake pastor. Atrue pastor is one who tries to live by exemplifying Jesus's way of life. And that is;
No cheating of any form
No adultry
No lusting
No being greedy
No bribing,or taking bribe
No indulging ...
No scamming
No false miracles
Well, apastor who does anything contrary to what I have mentioned,is a "false prophet",and as such should not at the pulpit.

@Tumia Ubongo, Jesus was a carpenter. Paul made tents.

Murderer Ng’ang’a is just another drunkard Githaria misleading Shepherd.The guy should marry fake Judy as second wife and continue fucking her.Ng’ang’a barks suing for taking Shepherd’s sperm as if Kibeti removed it from his pockets.Others are criticizing him for extra martial affairs but there is nothing wrong with pastors marrying many wives.It’s your choice.Ata IPhone 4G amekumbaliana na mimi.

We need to stop blaming the devil for shit that has nothing to do with him or her.
Who has ever met one?
And so, what did you guys talk about.