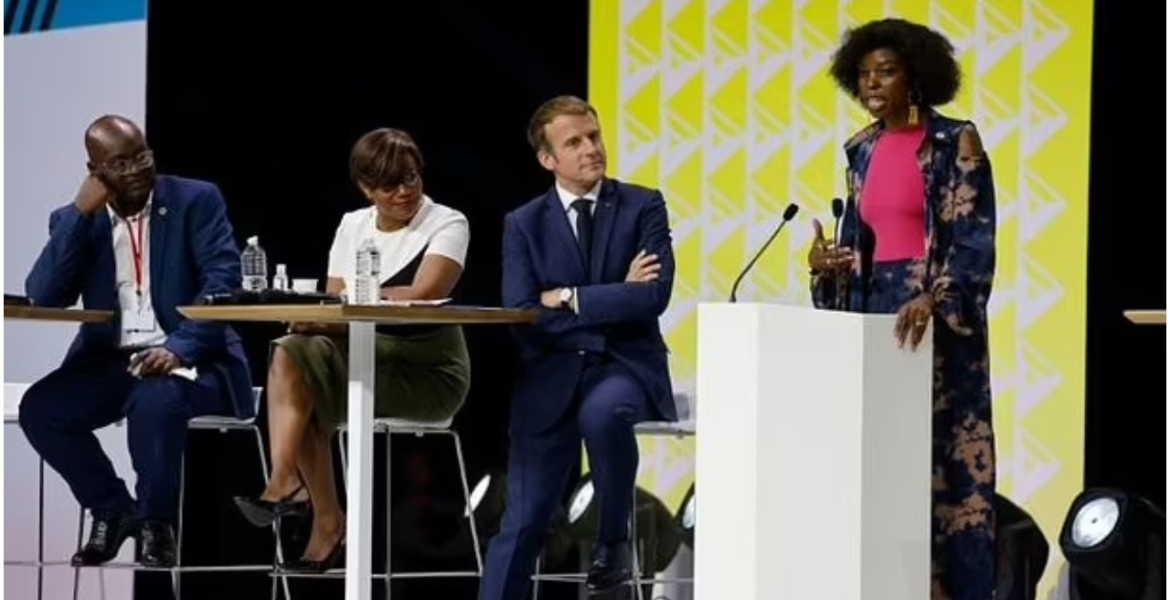 During the meeting called to discuss France’s role in Africa, Adelle challenged President Emmanuel Macron to explain what his country “stands for.”

In her speech, she accused France of living in “denial” of its “destructive past” during the colonial era.

“We as Africans feel the pain of colonization every single day. What we end up with is skepticism of what exactly does France stands for,” Adelle said to fierce applause.

Adelle was in a plenary session with President Macron, alongside 11 other young Africans, who collectively urged France to support democratic renewal in countries where leaders are clinging onto power under “democratic dictatorship.”

Senegalese blogger Cheikh Fall urged Macron to “stop cooperating and collaborating with these dictator presidents,” adding that France should apologize for crimes committed during the colonial era.

Responding to Adelle and other young African leaders, Macron defended his country, saying it often voices disapproval of political or military coups in Africa, and had reduced cooperation with authoritarian regimes.

“I have never set up a military base unless being asked by democratically legitimate leaders,” he said.

On atrocities committed by France during the colonial past, Macron said, “Asking for an apology is too easy… I don’t believe that we can free ourselves of this history.”

He pledged to introduce an “honest assessment of France’s colonial past” in school curriculums.

“I don’t believe that we can free ourselves of this history. I believe in a policy of recognition,” he continued.

She could have gone further and demanded Macron to to use his influence to deny corrupt Africans led by heads of state/governments the opportunity of hiding siphoned billions in their banks.Others register their companies in foreign countries to evade taxation.

and stop politicians from immigrating to France. Those poor French colonies politicians have houses in France or live in France after their term is over. Every country that was colonized by France is very poor.

You can say that again!!!

Comrade K,
But who owns the mining rights?
That's why civil wars will never end in Africa, even though there is nothing CIVIL ABOUT CIVIL WARS, the MASSES are slaughtered in the guise of protecting the ELITE.

Adelle Onyango,Go baby Go.
This is the kind of breed Iam talking about. Fearless,not driven by personal gains.
I BELIEVE OUR LADIES ARE STRONGER IN DEALING WITH THESE MATTERS .
Before you start bashing and screaming,
IT WAS OUR KENYAN WOMEN WHO TOLD MEN TO EXCHANGE MITHURU FOR PANTS ,BEFORE THE MAU MAU REBELLION.
COMRADES, THINK ABOUT IT.

France is socialist anti God nation. Nothing much to expect from. They destroyed nations so now those who fled are entertainers and athletes in their clubs.. No Equal Opportunity act or race stats to monitor discrimination in jobs and other sectors.