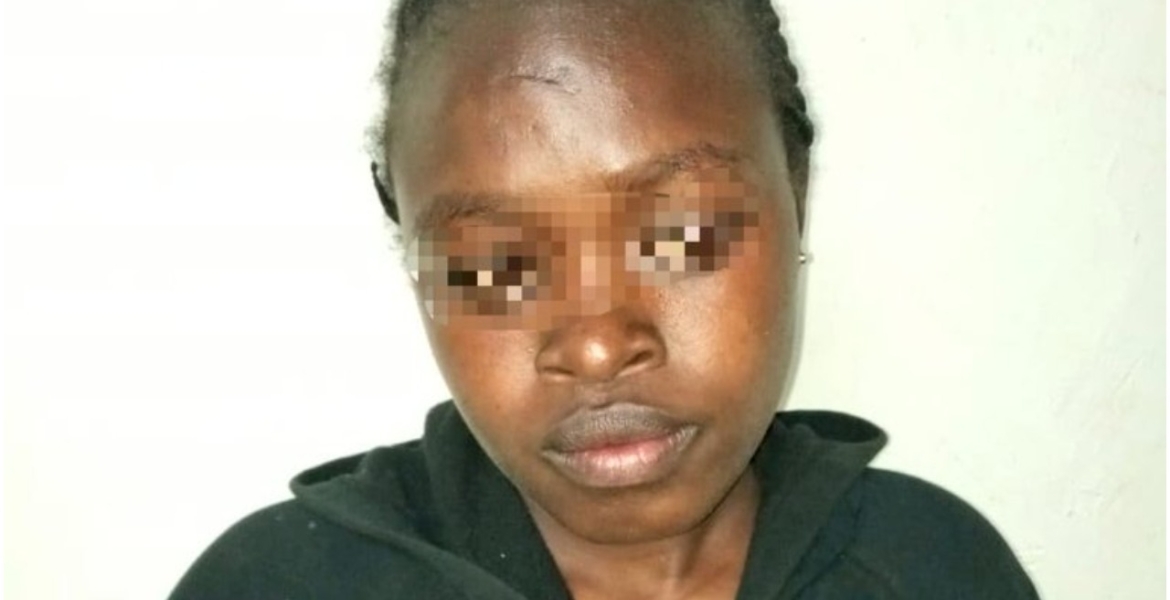 A housemaid accused of killing her employer’s seven-year-old son and seriously injuring his mother has been arrested.

Lydiah Jelagat Kipng’etich, who went into hiding after the September 24th incident, was arrested in Gilgil, Nakuru County on Sunday.

The 24-year-old was flushed out of her friend’s house in Kongasis after engaging the Directorate of Criminal Investigations (DCI) detectives in a cat and mouse game for hours.

Armed with a machete, the suspect is said to have ambushed her employer, a Rumuruti-based prison warder, at her home in Marigat, Baringo County.

She allegedly crept into the master bedroom in the dead of the night and attacked the warder, who was asleep, while her husband was away working.

With blood oozing from her head, neck, and arms, the warder raised distress calls, with neighbors rushing to the scene to rescue her, but Lydiah escaped in the cover of darkness.

As they made plans to ferry the woman to Nyandarua County Referral Hospital for treatment, they stumbled upon her son’s lifeless body hidden under the bed.

“He had some blood oozing from the mouth, with no physical injuries,” DCI says in a report.

Lydia is currently being held at Marigat police station pending arraignment at Kabarnet law courts on Tuesday. The suspect will be charged with murder.

Why are Kenyans killing each other in numbers that were unheard of two decades ago? Just the other day a 103-year-old man stabbed his 87-year-old wife to death because she denied him the benefits and comfort of a marriage in the midnight hour.

What is this? Revenge or mere madness? God have mercy!!!

Not trying to justify a senseless murder.
I have said it before, we need to dig deeper within OURSELVES and start treating each other as human beings.
We all know how HOUSE GIRLS ARE TREATED IN KENYA.. LIKE SLAVES.
LOW WAGES, NO APPRECIATION AT ALL, OVER WORKED, BEATEN BY THEIR EMPLOYERS, MADE SEX TOYS BY THEIR MASTERS... BUT WHEN SHE STANDS UP AND DOES THIS WE WANT TO DEMONIZE THEM.
IT HAS TO START WITH EMPLOYERS.

You have a point. Sometimes, that may be.
On the other hand, we also have to remember that some house helps could also have developed personality disorders such as antisocial or borderline owing to childhood traumas from poverty, suffering, abuse and/or neglect. Some come from poor backgrounds where there is pain, hunger, suffering and/or abuse. Personality disorders are from poor nurturing and abusive environments. One does not mainly end up being a house help or farm hand having have had it very good in life during upbringing. Such may have poorly developed reasoning, cognition, impulses control and coping hence resulting to such actions. A similar experience of a help poisoning a close friend's 5 year child earlier in my life still bothers till today. That shattering scream of our friend that made us all know she could have probably killed that girl herself had she laid hands on her. We all tried long after the funeral to understand what led to that and we could not. She had been in that home for just a week. Very sad and evil.

Totally agree with your trail of thought! A domestic worker is the most important person in any home! Your children are on their hands more that ours, hence, deserve to be treated with respect, & appreciation.

Comrade HKM,
She's young and until we understand what she's been going through, then we can condemn her.
It easy to say quit her job.But not knowing what her mental health is or was by the time of this crime was committed, all we can do is let professional explain.