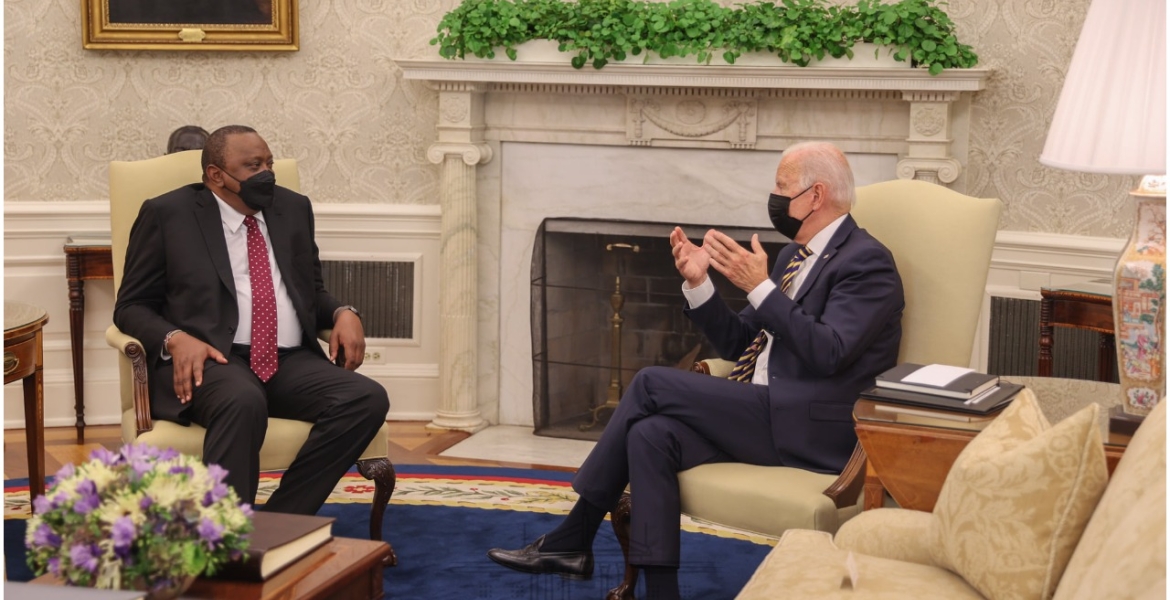 President Kenyatta on Thursday held private talks with his US host President Joe Biden at the White House in Washington.

Kenyatta made history by becoming the first African president to visit the White House since Biden took over office in January this year.

During the historic meeting, Biden announced a US government donation of 17 million more J&J COVID-19 jabs to the African Union.

Apart from COVID-19, the two leaders discussed several other subjects of mutual interest to Kenya and the US, including the global fight against terrorism, climate change as well as trade and investment.

On the war against terrorism, Kenyatta thanked the US for being a strong partner of Kenya.

"We’re also very closely partnering, especially in regard to the fight against terrorism globally. The United States has been a very strong partner to Kenya in that particular fight," he said.

He also noted that Kenya has made tremendous progress in climate change adaptation and mitigation, and welcomed the US back to the Paris Agreement.

Kenyatta further stated that Kenya was keen on strengthening its trade and investment relations with the US by investing in partnerships that promote American business interests while advancing the country's socio-economic transformation agenda.

"…I want to thank Kenya—thank you for your leadership in defending the peace, security, and democratic instincts of the region and your country. You’re doing a heck of a job," said Biden.

Accompanying President Kenyatta to the White House were Cabinet Secretaries Raychelle Omamo (Foreign Affairs) and Betty Maina (Trade) as well as Trade PS Johnson Weru and Kenya's Ambassador to the US Lazarus Amayo.

Kudos for putting Kenya on the map. Hopes this was a productive meeting. On a different note, Uhuru looks a little blotted. Hes thinking wrap it Biden I gotta go make mud. Why are all African presidents fat and out of shape compared to western presidents? If uhuru keeps going at this rate can you imagine him at Biden’s age.