Raila Feted for Sacrifices in Making Kenya a Better Country 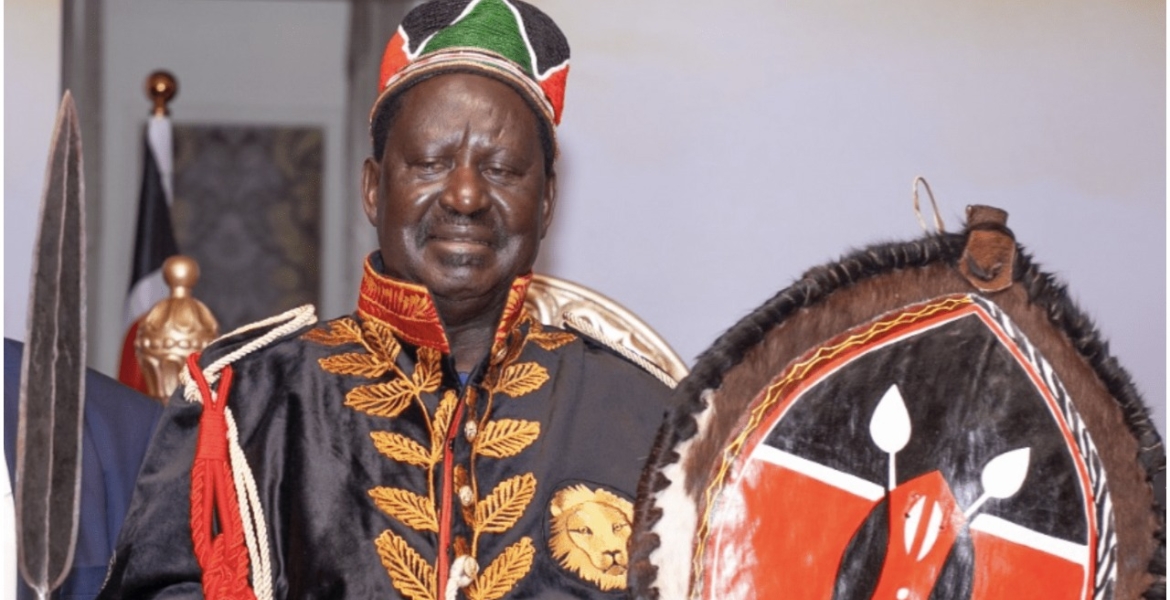 ODM leader Raila Odinga has been feted for his role in making Kenya a better country.

Odinga was feted during an award ceremony organized by Hekima Kaka Society at Villa Rosa Kempinski Hotel in Nairobi on Friday evening.

The organization said Odinga has over the years displayed patriotism, wisdom, perseverance, and power. He was recognized for championing unity, democracy, and development for the country.

During the star-studded event, Raila sat on a gold and red ‘throne’ with a footstool. He wore a two-piece suit over a black animal skin cloak with the Kenyan flag’s colors on the heming, a Kufi cap, and a ceremonial spear.

“I really look like Ceasar, sitting up here….,” Raila said, amid laughter, “The robes that have been given to me make me feel very regal and royal… I want to thank you really much for doing this.”

He thanked the organizers of the event for the recognition and pledged to continue doing what he does.

“Thank you for doing this, it takes a lot of time to organize a function like this, I am looking like a king,” he said.

“I’m a Pan-Africanist, but also an afro-optimist. Pan-Africanists are basically those who believe in Africa and the ability of the African people to develop Africa,” he added.

“…those are the people who inspire me,” he said.

Muuaji Raila was in 2008 erroneously honored by UON VC,Prof Makhoha for killing & cannibalising 1300(98%AGikuyu) Kenyans in the infamous 07/08 PEV.Makhoha also honored gen kiguoya/Kimuici Kibaki for letting the hungry demon kill his fellow tribesmen.Their aim was to loot which they succeeded.

He will be president for lack of better options.

Muuaji Raila and his doctors should go public about his health status.It is no longer a secret the Germany doctors told the savage he has two years to distribute his illicit wealth then expire.The demon thinks the only person to protect his family is Jonathan Moi who will be his running mate or Mutahi Kagwe/Michuki who will surrender the presidency to Jonathan once the savage becomes corpse.

Raila has done his part in trying to get to power by all means both violent and non violent. His secret docs have advised him against rigorous campaigns. He's not listening it seems. His son can't fit his shoes so old man must push to the tape.