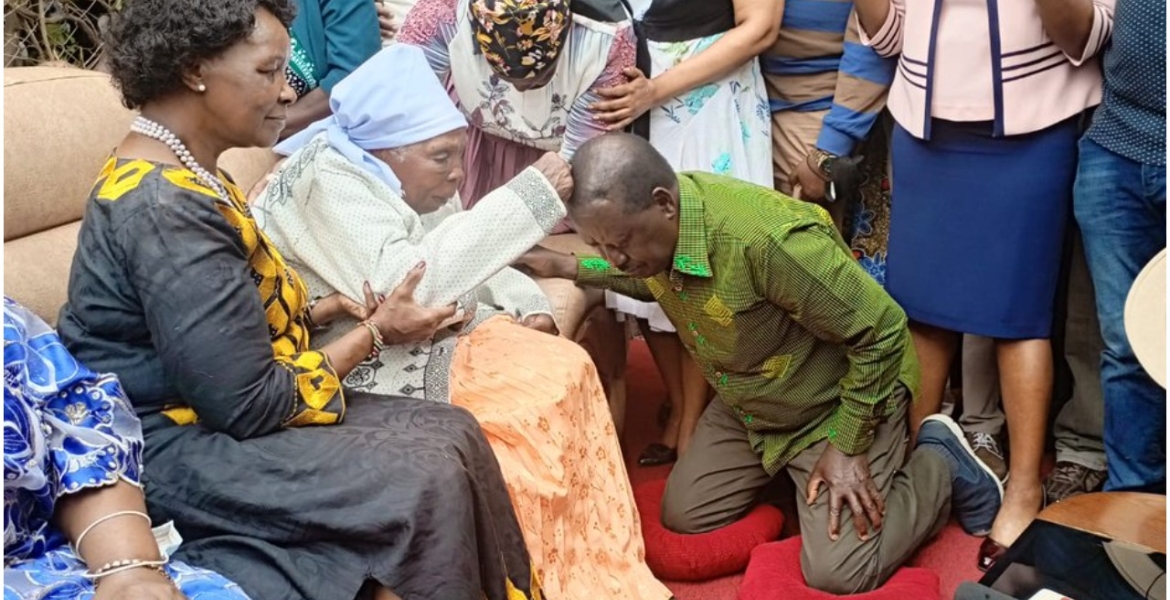 Odinga lauded Mukami as an embodiment of Kenya's struggle for independence, saying that she was detained together with the wives of other freedom fighters.

During the visit, the 90-year-old blessed Raila by putting her hands on his head as she prayed for the 2022 presidential hopeful.

Odinga called on the government to come up with a comprehensive program aimed at helping those who fought for the country's freedom and independence.

He indicated that he has petitioned the British Government to compensate descendants of Mau Mau fighters and apologize to their families.

Odinga pointed out that Mukami was among the heroes and heroines who fought for Kenya’s independence and deserves recognition as the country celebrates Mashujaa Day this week.

Hehehehe the old guard is desperate of 2022 elections.He can go kiss the top of mount kenya but we the young People of the mountains don’t give any shit.We will send you home 2022 by 8am n retire in politics for good.We haven’t forgotten yr father behaviour during Kenyatta gavament n your history of pains/killings/economic sabotaging

Are you aware that if it were not for Jaramogi Oginga Odinga Kenyatta would not have become Prime Minister and subsequently president? Needless to say a significant number of our Kikuyus wanted Kenyatta to die in detention. Thoma history itu tiga urimu.

@Bobby Kibe,everything Jaramogi Odinga did for Kenyatta was in self interest. By 1963, Tom Mboya was in the CIA's radar and was the most favored, even groomed to become the first president of Kenya. Jaramogi stand zero chance. As a socialist- bending towards USSR, he was a reject to both UK and USA- and both of these super powers were hell bent on keeping Kenya in the capitalism block of nations. Kenya was, geo-politically speaking, too important to let go the way of Nyerere and Tanzania. Here is the calculations of Jaramogi: since even prominent Kikuyus(such as Dr. Gikonyo Kiano) cared little about Kenyatta, Tom Mboya was easily going to raise to the presidency. And since Mboya was luo, Odinga realized that he would not even become a vice-president. Newly independent Kenya couldn't have a Lou president and vice- president at the sometime. But, if he campaigned for Kenyatta, Mboya would not become president and Kenyatta would obviously give the vice- presidency to Jaramogi. By the way, even with his KPU party, Jaramogi could never become president of Kenya because US and Britain couldn't let Kenya have a socialist leader at the helm of power.

@halisi - good thing you only got one vote to pass on to the murderous thief Ruto! 2008 is beckoning all over again in 2022 where Ruto will kill Kikuyus again! If it does not pain you the way Ruto killed women and children, just give the fucking asshole your vote!

OMG...this is tantamount to laughing at her. Where has he been till she turned 90 in anguish? Kinyururi it is.

It's that shameful time again..when the hungry power seekers coming tropping down asking for favors from walala njaa na hoihoi. Mr. Alair, where were you all those years? 90+ years is a long long time. The herorious aging lady loses nothing by denying you the blessings. At her age now, she can only make peace. She remembers like yesterday how your founding thieves/fathers stole her husband dream for freedom, justice and equitable distribution of land as a national resource that was stolen from us by
mkoloni.You are as fake kama ule mganga wa risasi moja!

Bobby Kibe what has Jaramogi to do with his son Raila? Though left out of the government he never tried to sabotage the country trying to bring it to its knees to serve his ego. Once out he sees no evil, hear no evil

@Maoni mengi very true indeed.You cannot fool any Gema person.Ondinga family is Hated to the core in gikuyu community due to their history from his father tenure n the evil son rao.As I said he can even go kiss Popes feet but we won’t make him to sleep in that hse on the hill.2022 straight to bondo.

This is how you know how fake a person can be. Visiting a war heroes wife and handing some form of bribes to seek favors only when he wants something from her. Where was he all these years?

Stop wasting time acquiring “blessings” from someone who is on their way out.Any agreements you have had with this people has failed miserably.It is time you put your presidential aspirations to rest .We need new young blood at Statehouse and from your actions it looks like more of the same shenanigans.Play around and that thief Ruto will get to statehouse because you refuse to select an heir yet there are many more capable formidable candidates who do not rely on one community to take them to statehouse

It is so ridiculous to say that he sent petition for Mau Mau fighters. Kenya got independence in 1965. We are in 2022. They haven't done anything for these freedom fighters for 57 years, i repeat again 57 years and they try to delude people that they will do it now?