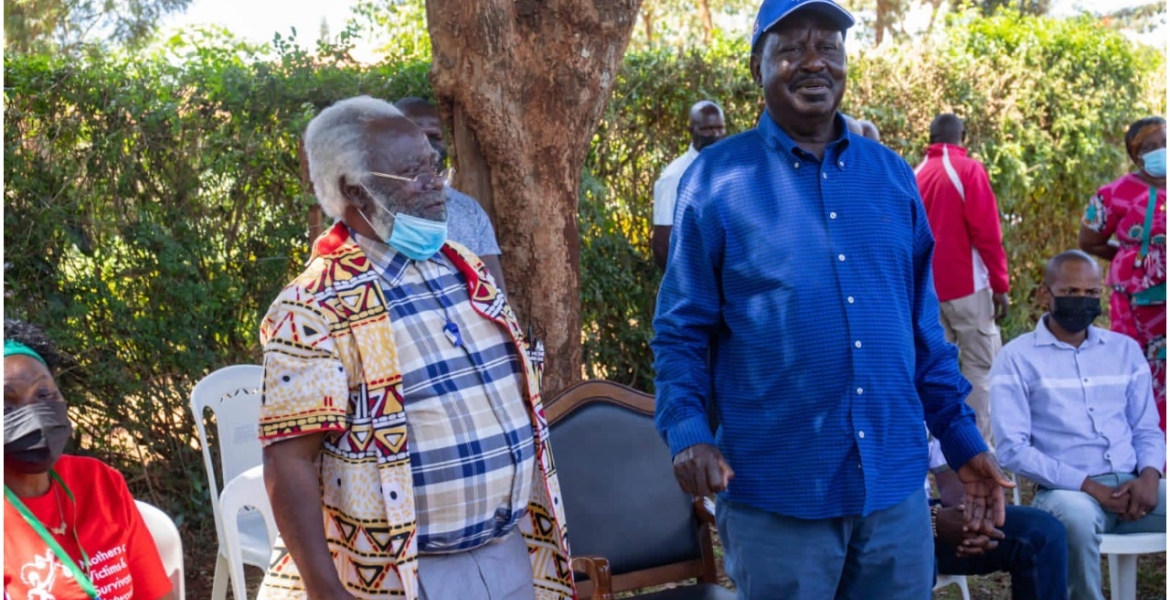 Speaking on Sunday, Odinga said leaders should avoid ethnic profiling and instead preach peace ahead of this year’s general elections.

Odinga, who is eyeing the presidency, added that every Kenyan has a right to live freely anywhere in the country.

“We have IDPs in various parts of this country due to political violence. We do not want to go back there. Let us maintain peace and urge every person regardless of which political party they belong to or who they support to preach peace,” Odinga said.

Senator Linturi was on Sunday morning arrested at a hotel in Eldoret by detectives from the Directorate of Criminal Investigations (DCI) and driven to Nakuru where he recorded a statement.

His arrest came hours after the Director of Public Prosecution (DPP) Noordin Haji directed Inspector-General of Police Hilary Mutyambai to investigate the politician over the utterances made during Deputy President William Ruto’s rally at Eldoret Sports Club on Saturday.

Following a public uproar, Linturi issued an apology saying his remarks were misunderstood.

Mithika was awarded shs 2 billion by Ruto to inform the Kikuyus that they will be kicked out of the Rift Valley if Ruto is elected president! Ruto wants to buy the presidency with stolen money! Those to harm the Kikuyus will also be bought by Ruto among the Kikuyus! Tame your greed for money Kikuyus!

Kenyans should thank Linturi for telling the them about Ruto’s pending secret plan to kill Kikuyus who he referred to as madoadoa!

Kenyans must vote wisely not to find themselves in the hands of a hyena that will devour them alive!

In RAO’s hands, all Kenyans will be safe! I congratulate Baba for having the courage to condemn Ruto’s madoadoa utterances! Let the UDA operatives come out to condemn WSR!

Kikuyus, it’s time for you to wise up! Ruto has just used one of your own, Mithika, to deliver the ugly news! Prepare yourselves for a Ruto president if you so foolishly end up voting for him!

This were the words that originated from Raila himself in 2007. Why would he be up against his own word right now? Even though the word madoadoa is the same word both Raila and Mithika have used, they bear different meaning. Mithika come out to apologize for the sensitivity of the word as he used but also clarified that he meant it differently from what Raila used then: that he was urging the constituents to vote out madoadoa, those that are from the region and are on different parties.
For me, the government shouldn’t have arrested Linturi especially having cleared or explained what he meant. The government shouldn’t arrogate itself to the use of Word madoadoa as if it’s criminal or in anyway an incitement.

@Mathenge, in Raila's hand, bodies of Kenyans littered the streets of Nairobi during 1982 coup which Raila confessed to have masterminded. Raila hired a British laywer and walked away. Thousands of our very own- finest Air force were hanged by Moi and thousands of Kenyans lives destroyed. In Raila's hand business were burnt, motorists beaten up, cars burnt and shops looted as Raila staged his daily mass protests to attack IEBC. Raila is a very violent man! He rides on the back of dead Kenyans in pursuit of political power. Uhuru is supporting Raila to protect families stolen wealth and has nothing to do with the welfare of wananchi. When he took oath as president, Uhuru had already been sworn in by a supreme court judge as per our constitution. Raila together with Orengo will teach kikuyus a lesson for life. Please note, Raila has never forgiven kikuyus for the death of Tom Mboya. Raila has never forgiven kikuyus for the plight of his father under Jomo. When he became Prime Minister, he said, "this is our time to eat. Ask Miguna Miguna. If Raila becomes president, one day Uhuru will cry like a boy due to what raila will do to him. You will understand why Moi rejected Raila.

Where is Ruto? He was right there when madoadoa incitement comments were made by Mithika! Ruto did not put a stop to what Mithika was warning the Kikuyus about madoadoa! As a n man tater of fact Ruto glean with an approval of what Mithika was talking about.

Is Ruto the right person to be the next president of kenya?

Luo’s throw stones at the police and police brutalize and kill Luo’s.

It is normal for Kikuyus and Kalenjin to kill each other during the election period.

It’s what these tribes do.

This is great coming from RAO. He used Madoadoa many times in 2007.

Raila, don't play hollier than thou. You were the first to call kikuyus madoadoa when your had staged 41 Vs 1. And then, you and Ruto burnt kikuyus alive in a house of God.

Ruto won’t even come out to condemn his madoadoa UDA plans! When is he going to speak against that nonsense? And Ruto steal expects to be the next president?

Exactly @Imkogoo raila used this madoadoa a lot in 2007 no shit happened to the idiot.He sweared himself illegally which is treason no shit was done.I cannot wait for we the Kenyans to send this old chameleon kigeugeu straight to bondo for good.