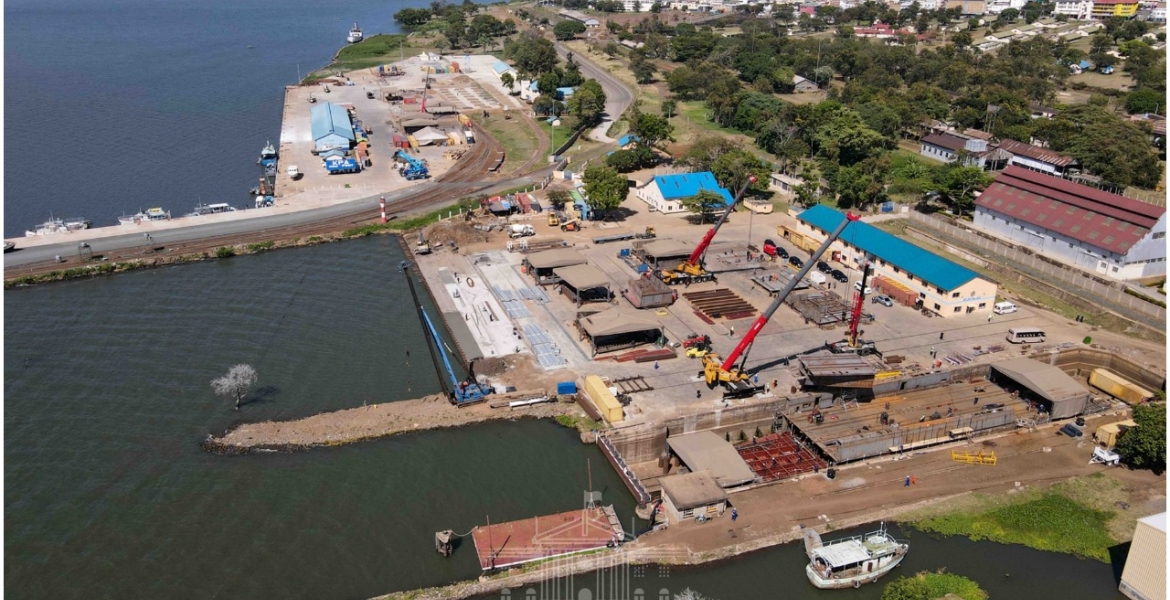 President Kenyatta on Wednesday made a surprise visit to the Kisumu port where he stayed for close to three hours.

The president reportedly landed at the port in three Kenya Air Force helicopters at around 2.45 pm and was picked up by a convoy of about 10 vehicles.

He was then driven towards the Kenya Shipyards section within the Kisumu port where he inspected the ongoing construction of a ship, according to sources.

Kenyatta was flanked by Chief of Defense Forces General Robert Kibochi and other military and government officers.

His convoy left the shipyard area at 4.50 pm before he boarded the waiting military chopper a few minutes later. Kenyatta then proceeded to inspect the Mbita Causeway in Homa Bay and also the ongoing dredging of Lake Victoria before flying back to Nairobi.

The Kisumu port, which had been dormant for over 20 years, was renovated last year at a cost of Sh3 billion. The revival of the port marked the resumption of bulk exports to Uganda and Tanzania through Lake Victoria.

Uhuru, if you had not picked the Sugoi looter for a running mate perhaps your presidency would have accomplished much more. We learn as we go. You have done some good work these last 5 years while your vice amekuwa mdomo tu.

You are right that if they did not sideline the deputy, there would have been much accomplishment. His new deputy president, Raila, came with his own selfish agenda of changing the constitution through BBI. And instead Big 4 agenda went dead in place of handshake.
Everyone knows Ruto is a determined workaholic given a chance.

@Asista, wrong! Loot-all is a determined impregnator of school girls, a determined land grabber, a determined terminator of his perceived enemies. Anyone who tear gasses toddlers and burns human souls alive should never be allowed to see the light of day let alone run for presidency. Anyone who supports such evil is as much involved in it as the perpetrator. You do not have to worship foreign gods to understand the difference.

FYI- BBI is not dead, it is on Vacay. It will pass with a landslide when that time comes;in less than a year. BBI is not only good but GREAT for Kenyan Economy but a wheelbarrow taker is too busy to see the big picture.

If what you are alleging is not sheer lies and inherent propaganda 3.0, then we do not have a government! But since you have said Uhuru has done a good job, then you must be lying about Ruto. And if you think you are not bullshitting, support your wild allegations.
Our country is as divided as before. With less to be proud of other than what is seen to be products of massive borrowing and swindling!!

Kenyatta has no idea what leadership is. Ndoi mbere kana thutha. He is one very confused mutongoria. I guess sugoi guy would have been better if roles were reversed.

This is photo op…kinda like Trump and the bible. He knew it was going to be covered in the 9pm news and so for fanfare he had to make it more dramatic. There’s nothing to see here

This sounds like gossip. Mwakilishi should include a photo of Uhuru at Kisumu port.