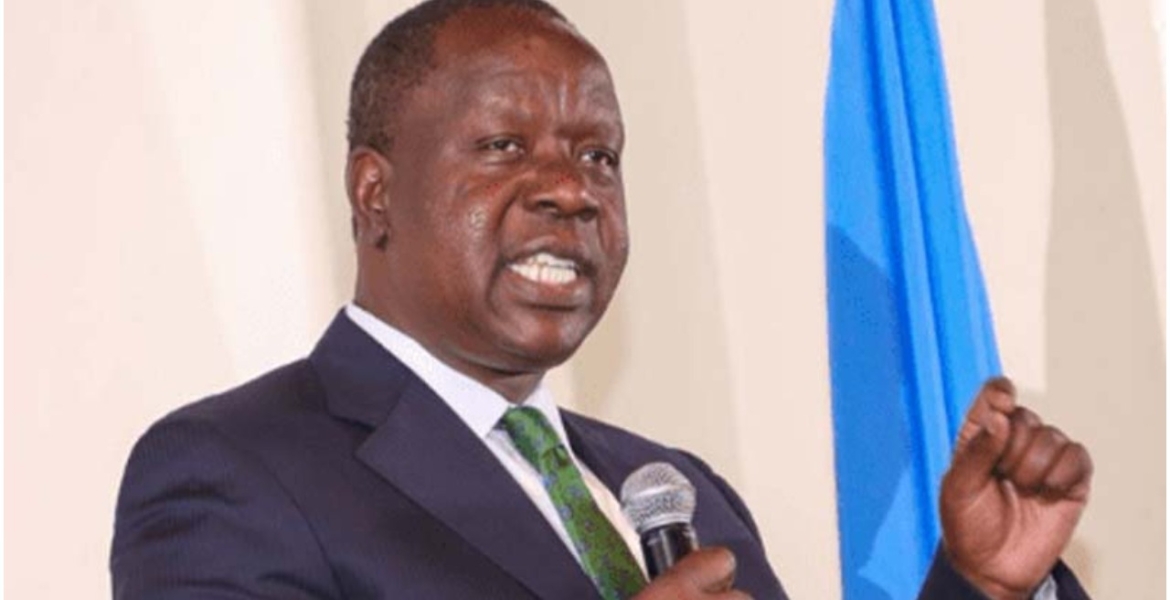 Interior Cabinet Secretary Fred Matiang'i has warned that money launderers, alias ‘wash wash’, drug dealers and other criminals could flood the next parliament if a lax in financial regulations continues.

Matiang’i indicated that there is a long list of suspected criminals eyeing elective seats in the August 9th elections, warning that they could manipulate the electoral process and bribe their way into parliament.

“We could end up laundering criminals of unprecedented standards into our elective offices. We might have over 40 percent of elected office holders becoming our leaders if we allow all the ‘wash wash’ gangs and other criminals to bribe their way in the coming elections," said Matiang'i.

Speaking during the National Conference on Criminal Justice Reforms in Naivasha on Tuesday, the cabinet secretary cited weak regulations on the source of campaign funds as a major threat to the credibility of the upcoming elections.

Matiang'i pointed out that the Independent, Electoral and Boundaries Commission (IEBC) was not to blame for the weak regulatory framework on campaign financing.

The abuse of social media, Matiang’i said, is the other major concern for election security and credibility, and expressed frustrations with the process of prosecuting those involved in the crime.

“We have the challenge of multiple bonds issued by our courts. Some of the people who have been arrested are enjoying their eighth, ninth or tenth bond. This of course does little to deter others from engaging an army of bloggers to character-assassinate others,” he said.

Matiang’i called for the amendment of relevant laws regarding intelligence gathering and the prosecution of digitally driven crimes.

We all know that Ruto have empowered them because he is the biggest “wash wash” there is around. He has already started the wash wash business with his in-laws in Nigeria. Kenyans buckle up and enjoy the rocky ride.

You have told them CA Fred Matiangi but they are all in love with criminals. Kenyans would not be singing the Ruto’s hustler song if Ruto was not supplying them with dope. He wants to confuse the youth so he can manipulate them.

Chebukati is powerless because he is deeply rooted in corruption himself. He is being bought with Ruto’s stolen money to rule IEBC events n Ruto’s favor. Chebby is one character who can’t be trusted. He cleared Sonko and Waititu to run for governors of counties they had stolen everything.

Matiang'i you're a true leader!

African countries are so easy to be manipulated by the power of the west in almost every corner. The effect of Drug money is evidently seen in many countries and even at present in America the struggle is real. So now is the right time to make a move on saying "No weed and its supporters" despite it can generate revenue is still by far incomparable its long term lingering effect on teenage brain damage is a huge loss for the country at large.

Not sure if Kenyans want honest men and women to run the country.Ethical persons with integrity,that is. Matiang'i as well as a host of Kenyan know these suspects,but somehow they have been cleared to vie for public offices.Why?
If we are serious about discouraging corrupt,and crooked individuals from running for public office, all we have to do is to require that any person with acriminal,or scandal hanging over his/her head should not contest till cleared by the courts,and approved by the public.It's that simple.

WSR will sell kenya to Nigerian drug lords and turn kenya into a country of maggots. Ruto’s priority is to make dirty money so he can buy political power. He is the king of money laundering in the entire African continent. Ruto must be contained before he gets vested to destroy kenya.

I’s rather Uhuru declares a Marshall or rule indefinitely if the alrernative is Ruto and the other thieves! Honestly, most African countries would rather be colonized if the type of games Ruto and Rigathis are playing to gullible poor to ascend to power is anything to go by. Mwafrika mpumbavu when thinking of Musalia, wetangula, now mtua, surely who is fooling who?

This useless idiot should tell us where he took money involved on Ruaraka land deals??Matiangi u should b busy looking for a job incase Ruto wins or which diasporas country u should move to coz the way u illegally harassed Tangantanga soldiers they will do so to you so if I were you I should b careful

Let's be honest with one another. The truth of the matter is we worship money in Kenya and you are nobody without it. If I had a chance to mint millions through wash wash, I wouldn't be here in Providence, Rhode Island working doubles and triples in nursing homes taking care of racists, octogenarian, peckerwoods. Iwinjo?