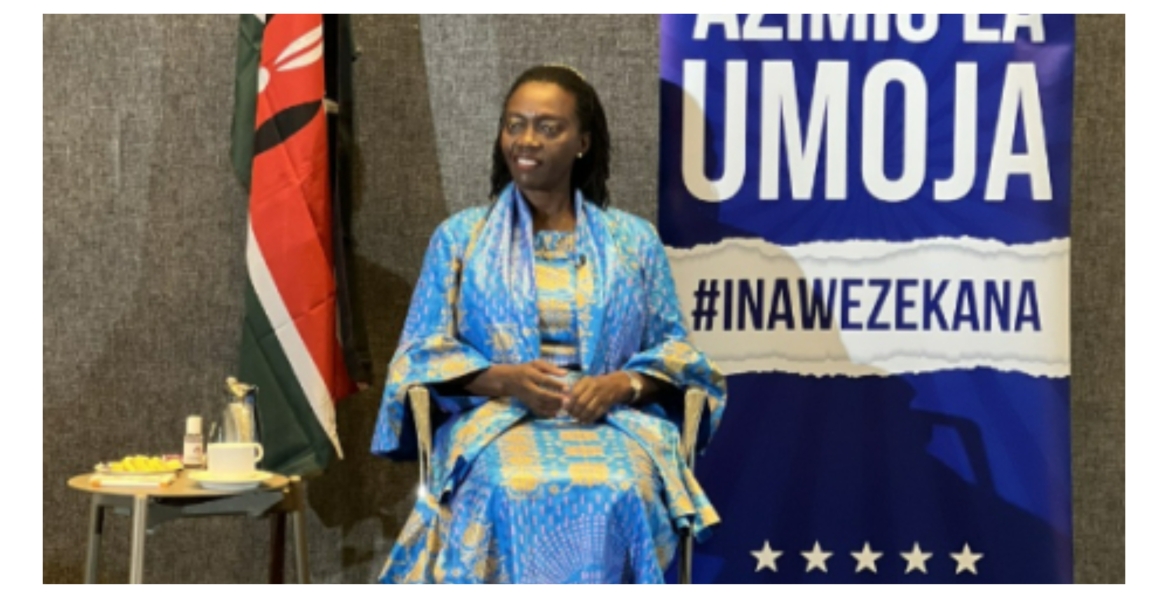 Azimio La Umoja-One Kenya coalition presidential running mate Martha Karua has assured Kenyans that they will respect and uphold the freedom of worship as enshrined in the Constitution if they ascend to power.

Karua, who spoke during an interview with Kikuyu vernacular stations on Monday, affirmed that the Azimio administration under the leadership of Raila Odinga will be founded on the rule of law.

The Nark-Kenya party leader also took a swipe at their main competitor Deputy President William Ruto for trying to paint leaders allied to the Azimio coalition as people who do not value religion or believe in God.

"Even Jesus said that not all who call him Jesus will enter heaven. Being a Christian is not portrayed by carrying two bibles while going to church or quoting bible verses, rather it's portrayed by having good behaviors," Karua said.

"In Azimio we respect the law and our track record shows. We shall respect all laws including laws of worship, therefore those behaving as Deputy Jesus should stop. Let’s be judged in heaven."

At the same time, Karua pledged that the Azimio government will prioritize the fight against corruption and lower the cost of living when they assume office.

"Corruption hinders development, education, health, and all other sectors. We have fought this war on corruption before and with the right captains in office, the war shall be won. When you get to your office as a government employee and leave to go do other businesses yet you receive a salary at the end of the month that too is corruption," she said.

The carnal shall not judge the spiritual. Did you know God made Paul's word His word?

Deputy Jesus will be busy stealing with one hand while holding the holly bible with the other. He is hell bent.

You can say that again Martha! Arap Mashamba is like a colonialist who held the bible with one hand while stealing our land with the other and when he told our people to close their eyes and pray, lo and behold our soil was gone.
People like Asista and Morris Mente should see the light.

The last person to criticize church goers whether their measure of belief is with the state or its agents is Karua. I personally don’t know what she beliefs in but I least expect her to behave like she is our little Deputy Lucifer!

Mrs.Njoka should first state how muuaji Raila with blood of thousands he has killed since 1982 failed coup attempt can lead corruption war.How much bribe did he pay prosecutors Wako and Tobiko to escape prosecution for killing 1300 in his 07/08 PEV?She forgot to say how an Adultery(No.1 corruption) champion can deputize a murderer in fighting corruption.Wangari also indirectly declares her support to Githaria WaMugunda who is fighting Adulterer Ruto for deputy Yethu’s seat.

I don't know where the heck you were in 2007/2008. But let me put it to you that Ruto killed, Raila Never Killed. Raila brokered peace. Let that sink into your thick skull. I was there, I was in the middle of it all. I was an IDP, where the heck were you again?Nkt

Mwakilishi is just bias whatever thy put out here regarding UDA...what about recent Jacaranda Violence estigated by Azimio gangs?????....Mr John Wanjohi'Im calling you being the editor' be NEUTRAL stop being a "tool"...

The bias is obvious.....you are right!

Mr Karua u tainted your name the day u joined the warlord as DP.U stopped too low as we know u as intelligent smart clean lady.U will b lucky ukiletea baba upto 100k votes.Sisi wa kikuyu watupangagwi nahatpigii This warlord kura.

Quit mentioning Ruto and Jesus in the same breath. One is a thief, the other is Saint...

@Maxiley thought your religion is science. Have you become a Christian?

Yes my religion is science,but I have to speaking Ruto's region to send home the point Iam making...
I invite you for Friday's service at New African Scientists United Church. I am the speaker of the day topic" Money is the cure for all evils", we accept a modest donation of 30 dollars at the door.

Mother has a tough job in Azimio. His party, NARC-K will have no other elected leader (MP, Senator, Governor, hata MCA) except herself.