President Uhuru Campaigns for Raila in Mombasa, Says Ruto is a Liar Who Cannot Be Trusted 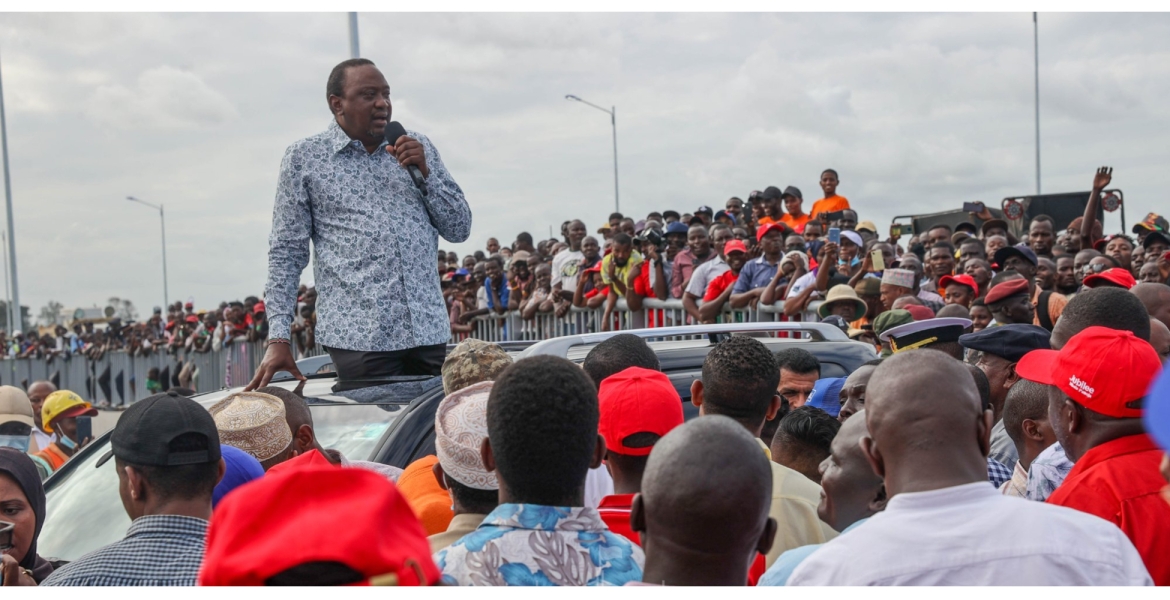 President Kenyatta has drummed up support for Azimio La Umoja-One Kenya coalition presidential candidate Raila Odinga, saying he is the only leader fit to continue his development agenda.

Speaking on Thursday in Mombasa where he launched several infrastructure projects including the Sh4.5 billion Makupa Bridge and Sh40 billion Kipevu Oil Terminal, Kenyatta urged residents to turn out in large numbers in the next week’s elections and vote for Odinga, who is giving his fifth shot at the presidency.

“The one who has the ability to lead the country through the path of peace and prosperity is none other than Raila Odinga,” Uhuru said.

Kenyatta dismissed Deputy President William Ruto’s claims that government projects stalled following his handshake with Odinga in March 2018, describing him as a liar who does not deserve to lead the country.

“I hear they are saying government projects ended in 2018 during my handshake with my brother Raila. Let me ask them, this project we are launching here today was launched in 2020, so was this before the handshake or after the handshake? Is this not work we have done?” Uhuru posed.

"We need a government that will unite all of us, let Raila come in and do the job, the rest can wait for another chance next time. We need faithful leaders who will take Kenya through the path of peace, if they can lie on such small things if you give them bigger offices are they not going to lie to you even more,” he added.

At the same time, Kenyatta told off Ruto and his allies for their sustained attacks and insults against him, saying that people are governed by truth and justice, not abuses and insults.

“Insults don’t build a country, such kind of development we are launching here today are the ones which build the nation and create jobs for our people,” said Uhuru.

True Mr President that Ruto is a compulsive liar. His pride and arrogance have brought him down. I wonder who is slapping who now. Huyu mtu wa kupiga kofi!

The BBI was meant to provide a soft landing for losing folks like wsr. Hw opposed it not knowing he would come to need it to save his political career. He is now heading to the opposition with muted powers.

Ruto should not be allowed to be in the next government. First Ruto must return everything he has stolen to the Kenyan people. Lest he gets put in jail to served the deserved time.

That’s why it failed because it was meant to reward anyone losing. That’s not what Kenyans want. I really don’t understand why you look taken down by the failure of bbi.
And furthermore, it was meant to create a place for Uhuru Kenyatta in government.

We wanted to reward your losing ruto so he foes not set the whole country on fire like he did in 2007. Nevertheless, now Raila does not have to worry a out Ruto because he will soon be going to jail at the Hague.

Kikuyus have finally decided that RAO is their choice. The mountain cannot trust Ruto with their lives let alone their economy.

Which Kikuyus? Do you know the reason why Uhuru himself being a Kikuyu cannot campaign in his region?

Uhuru is the best campaigner any where in Kenya. That is the reason ruto is now having emotional breakdown and outbursts because Uhuru has slapped him with a political KOFI.

I'm a lifelong MūGīkūyū and I know many who while not fond of RAO have even less trust in a thief who encourages arson and burning people alive, steals and lies as if he were born to it and whose running mate has bled Kenya dry and left Mathira in shambles. That's why they are voting for Raila.

Sir wake up from your slumber and check who refused to pay the rent at some point and we are cheering their inciter in chief. And that’s kikuyu economy

Uhuru has done a commendable job distracting wsr from his manifesto. Ruto is now talking about personalities and being a cry baby. Ruto is a national disgrace.

Tiga wana. Thats one very broad statement to make. Iam a Jarabuon and i never listened to Westerners beyond Rift valley

Kenyatta is describing himself

He is describing your prostitute mama and your sisters.

Let's wait for next week and see how dynamics will change.
Kenya is split at the middle and everyone believes that their candidate will win.
Unfortunately only one will be declared a winner.
Another unfortunate thing is whether RAILA or RUTO wins, majority of the folks running the government are CORRUPT as hell, Both R and R are corrupt. No one is talking about what UHURU, Family and GOONS have stolen.
We are all burying our heads in the sand, we have been blinded by our own tribal misguided ideologies and we only see issues when others commit them but not our own.
Let's understand one thing, RAILA, RUTO and UHURU are all in this together, RAPE,RAPE and RAPE KENYA some more.