Raila Set for a Week-Long Visit to the US 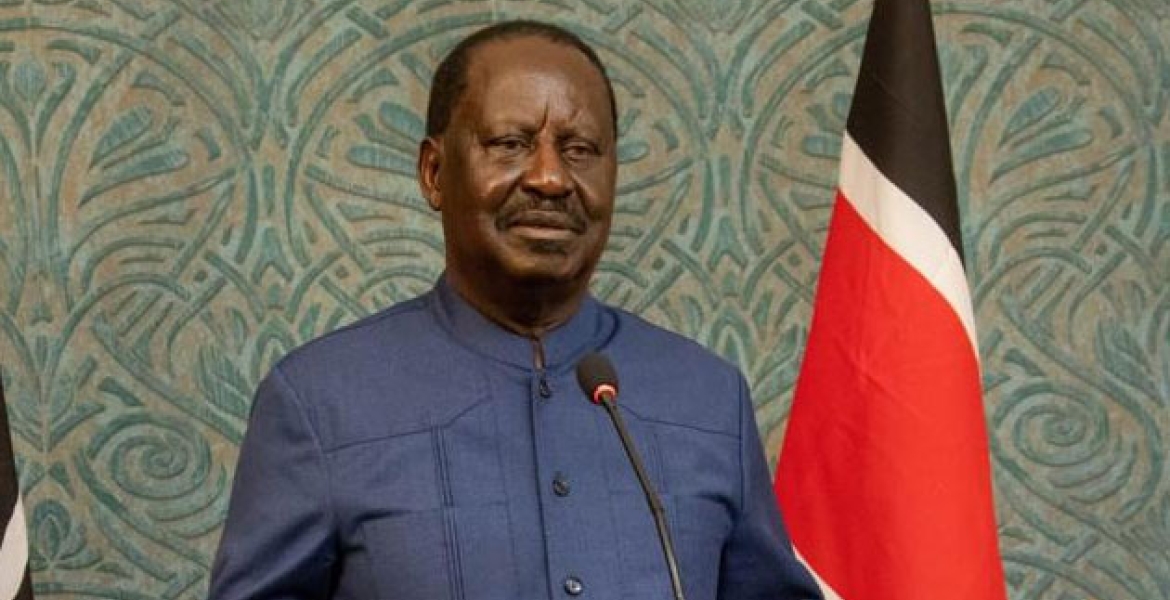 Azimio La Umoja One Kenya coalition leader Raila Odinga is set to leave the country on Saturday for the United States.

His spokesperson Dennis Onyango said the ODM party leader will be attending the inaugural US-Africa Summit in Washington, DC., in his capacity as the African Union High Representative for Infrastructure Development.

"Hon. Raila Odinga is set to leave the country late Saturday, December 10, 2022, for a one-week visit to the US where he will join other leaders from across the African continent for the US-Africa in Washington, DC,” Onyango said in a statement.

Odinga is expected to land in Washington, DC on Monday for the high-level meeting that runs from December 13th to 15th.

"He will be attending the meeting in his capacity as the African Union High Representative for Infrastructure Development. In that capacity, he will lead discussions on the promotion of investment in infrastructure and attainment of Just Energy Transition," Onyango added.

He is also lined up for a series of meetings with leaders from the public and private sectors and civil society organizations on the sidelines of the summit.

The summit aims to serve as a demonstration of the Biden administration’s commitment to the African continent and provide a forum for new joint initiatives between the US and African countries.

The summit, which will be hosted by President Biden, will include new initiatives to increase US engagement with the African Continental Free Trade Area (AfCFTA), as well as initiatives to boost the continent’s recovery from COVID-19, bolster food security and promote investment in infrastructure, health and renewable energy projects, among other priorities.

The Biden administration is also expected to reiterate the need for African governments to address democracy and human rights concerns.

Approximately 50 heads of state and senior government officials from African countries are expected to attend the summit, according to White House officials.

He is the Africas representative of infrastructure and development yet he is telling his political following to take loans and not pay back. What an irony? Now I have to believe in people calling him Lord of poverty.
The Biden Administration should snub him in the same way Obama did.

Context matters. You are missing the point FOOL!!

@MATATA don't debate with this fool! Outside Kenya Raila is highly respected

Respected by who?FREEMASON gods who summoned him in person to US for an explanation of sending his expired friend,Githunguri’s soul who died of illness instead of accident or homicide victim’s one as instructed or who?

The fool is this individual who is told to take a government loan to by condoms and gin. The fool is the one who keeps voting for a losing candidate for the last 25 years. The fool is this person being called every time to come out to the streets to demonstrate. And that fool is you Bmore and Matata.

Bmore, is it not only last month that this Raila said that the USA helped rig him out? Why then would he want to associate himself with them? Desperation?
We know he wasn’t invited for this meeting.

Could Raila be running away from Jamhuri Day celebrations?
Just a thought.
Revelations are everywhere.
What happened to his parallel celebrations?
His failed Kamukunji meeting foretold his anticipated failure on December 12th.
What has Raila done for Africa infrastructure? Or has he been busy with his loss since the elections?
Too much noise from Raila no action.
Raila, take a vacation before your retirement journey to Bondo.
In Bondo there is a lot to be done before moving to the international scene.
Wish you a well rested vacation! Enjoy!!

He is indeed running away. Such a high level meeting cannot be announced within 2 days. He had begged to to be invited and that explains why while those formally invited got their cards more than a month ago, his announcement comes out in a hurry.
What has he done with his position in so far as the African envoy for infrastructure development?
No one investor will be happy with a man who advises his people to take loans and not pay back.

Muuaji Raila only known development is flying plastic toilets for Kiberans and population control of MOUNTAINS by selling the methanol and poisonous maize..He was appointed to the office of high rep.for infrastructure by jambazi Uhuru but has no duties other than receiving a hefty salary,allowances and Itami wa ndege.The writer omitted other appointments like launching a new cemetery & a mortuary at Ellicott city

America doesn't work like that. She deals with heads of state. Others deal with states agencies. But you can say hi to Trump if you can, Raila. You will both have relevant discussions, same themes.

This time around, he will be rewarded with a Ferrari,as a xmas present,and a thank you for getting ready for the next presidential election.

Another BIG LIE from the peoples conman!!! There are protocols!!!