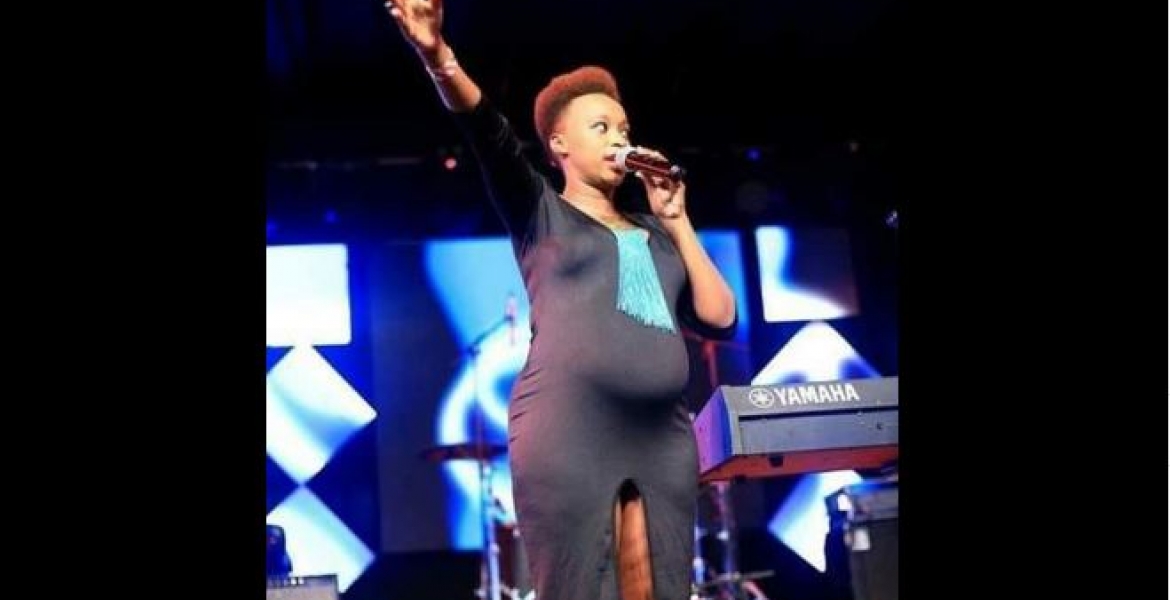 Kenyan preacher Shantelle Jepchumba of Glorious Heaven Ministries, Kimwarer has been blasted by some Kenyans online for dressing 'indecently'.

This comes after her photos wearing a dress with a long slit exposing her thighs went viral on social media.

Some online users were not impressed by the pregnant pastor's choice of dress, which she wore during a church service. 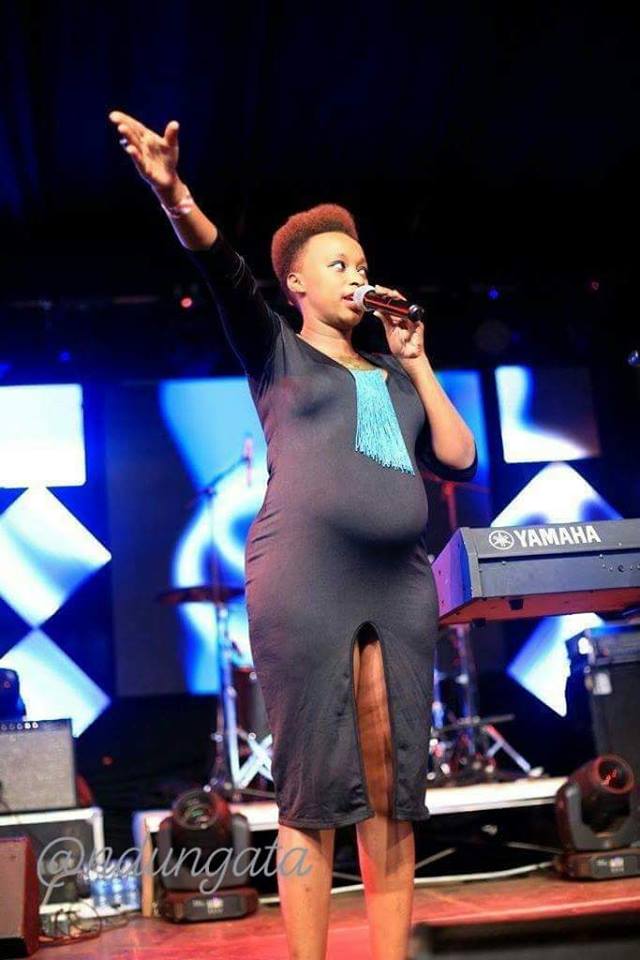 Many feel the clergywoman set a bad example to the congregant.

"Waah,,,, all fake,,how do you go to church dressed that way,,on the pulpit,” says one social media user Maria Ondiso.

Nnabugwu Eunice says:"This is not a decent dressing at all,let alone wearing it in d church by a pastor.God have mercy."

Twinkid says:" This is the end time that’s all. How can she wore this to church."

MaxGetwillPaid writes:"Well it’s all about dress sense. People should just learn to dress as occasion demands."

Salihu notes: "That is very bad of a pastor."

However, other users have seen nothing wrong with her dressing code and have defended her.

“She’s just ok. I can’t see any problem with her. You said Owuor’s follower puts on magunia…let her wear that’s her dress choice,” says Lilian Engesia.

Another user notes: “We are aware of the devils tricks to bring down the church of Christ. Even if that lady was in a club, social media will attach church; give titles to her as a pastor to make the world not believe in the gospel."

“Don’t be fooled, whether the pastor is naked or believers it doesn’t matter… What matters is your relationship with God. Even if it were true, that doesn’t mean there are no pastors who have not conformed to the standards of this world,” says Tumwebaze Tophias.

Those thighs and pu.. are gross.

Full display of the "Moral Bankruptcy " of all man made religions of today. (Christianity;Islam;Buddha;Judaism etc). It is time to be spiritual not religious. It's time for the so called "Blacks" to seek their nationality as "Hebrew Israelites" and join our black brothers who are studying and teaching the bible in the streets of America. (Watch Hebrew Israelites on you tube and learn). The bible is black man's history. May God give us wisdom and understanding of the truth!!!

Wooi!Hapo sio maneno ya my dress my choice! The bible says in Mat:18;6 "but whoever causes these little ones who believe in me to sin..." Worse still, it's being done in church at a holy place! Ooh mercy please! Does that chrch have elders who sit near the pulpit? I wonder whether they wake up at night having nightmares!

This Jepchumba is NOT a preacher, more like a heretic HO. what is she trying to show now. BURE KABISA!

She seems out to Spread legs; and to spread HIV. That's what MALAYA pastors do; called to ministry of satan.

Did you catch it from her specifically? Oftentimes it takes one MALAYA to know another. Are you one? Did you spread said disease? Or did you acquire it and now take out your hafefulness on everyone? Wewe Wacha zako!!

I Personally would not be bothered by it,but I have to agree that,that's not the way to dress on a pulpit in the house of prayers,just as much as it is not appropriate for fellows to center their attention on the thighs...
Focus on the WORD.
Anyway, could it be that she was preaching of not how to dress in church,thus doing it by example,or may be how to dress sexy for your spouse regardless of your body shape.But it surely beats those fig leave Adam and Eve covered themselves with.Just my random thoughts...

Two things hammered home to me as I grew up: a) Respect your elders. b) Respect the church in my every approach. Now, seeing this display goes against all the ethos of respect demanded by my parents! By coincidence, I was feeling rather guilty today for ditching the church...seeing this reminds me rather loudly that I did so because church has become such a con and just another institution to enrich the clergy from the giving's of their folk. She has been "Akotheenised".

My sister ,please do not feel guilty, I dished it too long time ago when I realized that the new churches here and Kenya are not the same humble churches I grew up attending. I do not want my children associated with churches either, on Sunday we go volunteering and helping fellow human being ... that is what Jesus did I think, he even played under an olive tree too:-)

@ Sukari, I share your sentiments.I tend to get the impression that Church is not well respected as it used to be afew years ago.I believe that the reason is - the clergy ,and other people of the cloth do not carry themselves as required.In other words they are not leading by example,as Jesus did,or as men of God are expected to.It is either that,or crooks have hijacked the church.Then the question is why would men and women of God let that happen.
Back to the issue at hand. There is a good reason why dress code is stressed in various settings.Image is very important.You would not expect your female dentist to work on you wearing spandex,or a miniskirt,without the white overcoat...at least not yet.

Sukari... Holier than thou much? Sasa Akothee naye ametoka wapi? You don't owe an explanation nor should you lay blame on anyone else morals in your opinion or lack thereof for not attending sermon of your choice. Is she the individual that sermons at your place of worship? Hm don't be victimized. Wacha hii finger pointing business.

Nyeusi blacks bure kabisa!Copy the western nonsense n u will burn in hell.Dress appropriate as @ maxiley said in the pulpit.Thats a night dress.How can his husband allow her to come out of the house going to church dressing like so.Shenzi type bure kabisa.

Live and let live. Wacha hata akuje uchi next time. Mental problems are real! When people want to occupy your brain through their cynical actions and you let them, then you ain't any different from them. Huyu Jep anapaswa kuambiwa hiyo ni kidogo, next time avae kinyonga mavi ama akuje uchi. Hello....

The church should be given the respect it deserves. Such choice of dressing is inappropriate.

The new Kenyan churches( apparently middle *crass* must have churches that are also middle *crass looking*....why is anyone shocked? There are no morals in Kenyan churches anymore, it is a new place for collecting cash, and elevating one's status. I no longer respect churches.

I would hope it's true that pregnant women tend to be forgetful and that she forgot one garment.
I am not a prude, but surely, mama mzito kuvaa nguo kama hizo ni shameful.
Next time probably parade in front of your mother or mother in law and get their opinion before venturing outdoors.
ITS JUST EMBARRASSING!

SEXY MAMA DO YOUR THING.VERY SEXY ALL MEN ARE SALIVATING.

Where does it say in the bible thou shall not showcase....cellulitis?
Besides, to those that take others to church, i bet the congregation was on high alert and pretty attentive. A very rare occurrence nowadays

Perhaps she should change the name of her ministries from Glorious Heaven Ministries to Fertility Seeds Ministries or Touch Ministries! But then again not to consider Opened Door Ministries as many would suggest!

Was this picture taken inside church? I would like to see the congregation too before I can say anything.But before I leave my own pulpit I would like to ask; why did she wear a maternity dress instead if she is expecting?

FG2 & Maxiley..my kind of people. FG2, you sure we are not related? Mhhh..@Sebi...holier than thou? MOI??! FYI, this is a forum open for all, be it you are based at the state house or the dumbs as you seem to be. So can I ask you to stop stooping low by your misplaced judgements sir?! We argue and critique on the whole, but you will find the majority of folks in this forum know it is just that. If I am "holier than thou", I suggest you look closely at that chip on your shoulder baby, it sure is getting deeper.

My religion SCIENCE can settle your wonderment right now.We can do DNA to show the degree of relatedness.Istrongly believe that iam related to Formerly Guest 2.That's why I have not sent my people to start formal negotiations...
Like isaid it's only a belief.

@Sebi, just to add: If you can't see why I drew the parallel of this lady with Akothee, then I rest my case. We are clearly cut from a very different moral fabric, so this will be the last time I will ever respond to your low down comments, which I note you spew to everyone. You appear to have no stand but to abuse regardless. Bye Felicia!

MAY SHE OPEN MORE BRANCHES IN THE COUNTRY. I WOULD LOVE HER PRAY FOR ME SECRETLY.

Are you guys sure this was not photoshopped? The face and thighs are from two different people, I think. Tee hee hee

am sick of seeing these cons in the name of pastor.now to make matter worse a pregnant woman near a pulpit

Expectant mothers tend to use their condition as a license to go overboard in terms of fashion choices. People should just learn to dress for the occasion.

what are immoral women like this doing in the house of the HOLY God of Israel..
why do I see some people sugarcoating sin here. To hit the nail on the head,, that pastor is a prostitute according to her dressing.
Will she really preach to a Muslim?? The Muslim will ask, do you want my daughter to dress like you.?