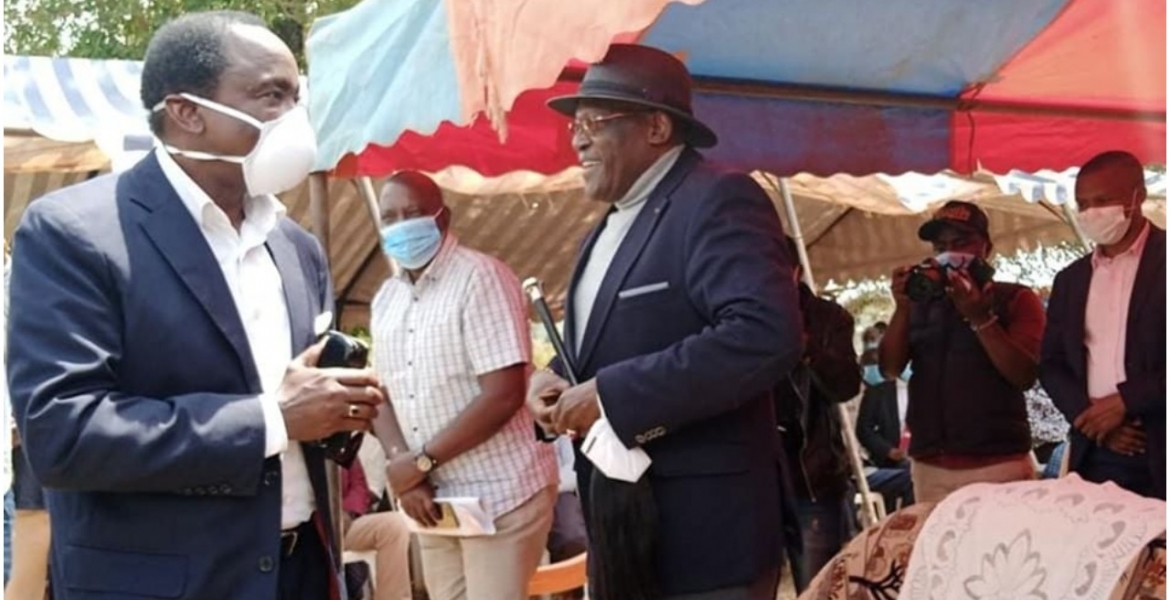 The incident happened during the funeral of Machakos Presiding AIC Bishop Bernard Nguyu at Mitaboni in Machakos County.

It all started after Kalonzo, who was addressing mourners, promised to reunite Muthama with his estranged wife Agnes Kavindu after the 2022 general election, remarks that rubbed the former senator the wrong way.

“I am telling you that next year, you will see Muthama running to perch on my chest because he knows where we are and where we are going. Even if he gets irritated, I’ll hand over his wife (Kavindu) back to him,” Kalonzo said.

Muthama left his seat, charged, and headed straight to Musyoka ready to attack him but he was restrained by Machakos Town MP Victor Munyaka. This forced Kalonzo to cut short his speech.

Earlier, Muthama was shouted down by mourners after he tried to campaign against the Building Bridges Initiative (BBI).

Kavindu is the Wiper party candidate in the upcoming Machakos senatorial by-election while Muthama is campaigning for the United Democratic Alliance (UDA) candidate Urbanus Ngengele. Muthama is the chairman of UDA, a party associated with Deputy President William Ruto.

I had that Wetangula has also sent Kalonzo to caress his wife,Waceke to stop bartering him(Weta) every evening.Sasa the “FIRE BREATHING” tough lady is waiting for him-awatwage wote wawili.Kalonzo atajua boma za wenyewe ni MOSHI.

It all shows how stupid you are to think this is some entertainment for you dummy! You lack moral conscience and basic compass in you small head! You are just a nugu enjoying crap you should be pissed of about idiot.

Some of the commits you make here make the world think your mother should have dumped you in the latrine upon birth! You are as foolish as stupid comes!

What a black monkey swing with foolishness across the bush??!!

These sinister drama is played out alot at funerals by politicians.This is a shame. They take advantage of the gathering to inseminate their own agenda.This has to stop. Funerals should be venerated,as mourners commiserate,and reminisce .Time to stop this shameful acts conducted mostly by politicians.

This kind of nonsense is what has kept Kenya behind. Some freaking uncouth old sons of bitches teaching young kinds the wrong way of handling disputes! It is so unfortunate that these are the people folks referred to as leaders!!??

There is something wrong (mentally) with black Africans. It all goes to show why the continent has never developed!

Muthama - I hate to tell you that you don’t even know your own self to know anything else! Grow up fool!! And at times folks wish the Kamuti took you away long time ago!

Why go fight in a place you are burring the dead? Is that a curse according to the traditions of the Kamba community? Nonsense!

Kalonzo should have slaps the dude who already look like a dead corpse walking! It is very hard to resoect these idiots!