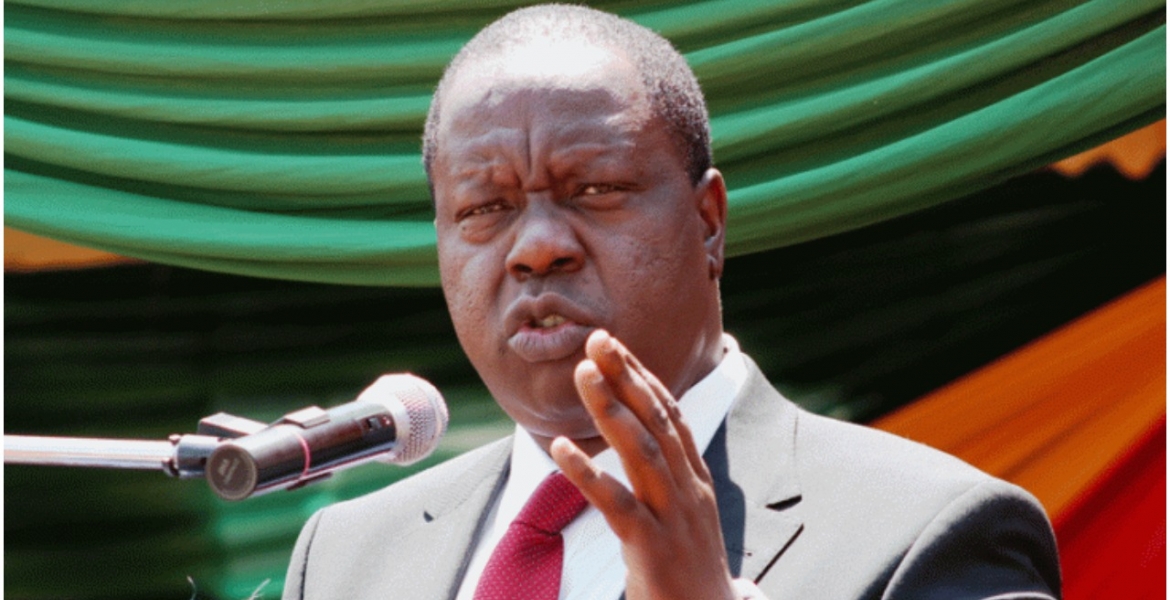 Speaking on Friday during the official opening ceremony of the direct entry cadet inspectors course at the National Police Training College in Kiganjo, Matiang’i said officers will not be allowed to marry across ranks if the proposal by the Interior Ministry is adopted by the National Security Council.

He said the move is aimed at curbing cases of indiscipline, sexual harassment, and assault, which have been on the rise among police officers dating or married to each other.

“We have to adopt a new way. We will create a new gender relations office that will be under the supervision of the Inspector General of Police. Some of the female police officers have filed sexual harassment complaints. I want to assure you that it won’t happen in the future,” Matiang’i said.

He added: “Moving forward, it will be illegal for a police officer to date or get married to a fellow law enforcement officer. If it happens that two police officers fall in love, then one has to leave the service.”

The no-nonsense CS further stated that senior officers are prohibited from having sexual relations with their juniors.

“We must maintain a certain standard of conduct in the police service. We are also insisting that officers involved in cases of sexual harassment in the service will be stripped off their ranks and gotten out of the service.”

“You are officers, we don’t expect you to leave here and go have affairs with constables who you are managing. If it’s a must for the involved lovebirds to be together then one has to leave the police service,” he added.

Good! We are tired of them fools killing each other! They bring they domestic issues to work and then use government issued weapons to kill their partners. It is about time some body stop this madness!

Good luck Cs Matiang'i.If teachers still molest school girls,and its against the law,what makes you think that dating among police men and women will stop?It will just go underground. Even this mating game plays out in churches between pastors,and other peoples' wives.However, you should take a serious stand on sexual harassment.
In any known human society,when you put men,and women together,especially those not blood related,there will be some hanky panky taking place.That's why the muslim world tries to separate the sexes.
The root of this problem is recruiting indisciplined candidates in police academies.This also explains why year after year Transparency International ranks police force as the most corrupt entity in Kenya.
Mr CS, I suggest you put your effort in fighting corruption .You stand abetter chance in succeeding there.

I don't know why I branded you a fool. I guess it's some nonsense you have said before. But this one is on point.

Thank you @ Mr high IQ.I take it your IQ is over 130.Yeah that would make you smart.Iam content in my range of 120s...And yes I did take an IQ test.

When did you take your IQ test @ maxiley! Rumors has it that you scored 42!

You forgot 1 before 42.Please correct.

Great decision to bring professionalism. Military doesn't allow it and most employers too. Police isn't a dating site but utumishi kwa wote.

Yes utumishi among themselves too!

@Maxiley this will be tough to enforce.. put young men and women together and nature and hormones will take over. I think it's called tilting at windmills

@ Mundumugo,no wonder even in the USA Army,the most powerful force in the world cannot stop it.Over the years,I have had alot of stories about what goes on in the forces.Sure there are some who go over board,and they that to be reined in.Law wont work.Its just like the law against adultery(loss of affection).People still commit adultery.
Iam for tough laws,and policies on sexual harassment.But on dating, let nature play out within socially acceptable parameters.

@Mundumugo, it is not about enforcing, but legality. The CS does not have the power to choose who Police Officers should marry, or be attracted to. This is a classic Kenyan case of making a mountain out of a moundhill. If presence of two Police Officers in the same work station has a problem, just transfer one, or both of them of them, to a different, but similar station. Case closed.

Matiang'i, soma katiba ya employment.
There is no law that prohibits any married couple working in the same office or doing the same job.
Matiang'i,you're not the law,we know that you mean well, but laws have to be followed.
Think again my brother, think again.

You are forgetting that laws can be amended or changed depending on prevailing circumstances. Matiangi’s proposed measure based on the seriousness of the matter if approved, can be adopted as law. Nothing is absolute!

Police Officers are also human beings and they are adults. The CS has no authority to monitor them like underage school kids. He cannot legally legislate their love life, if it is consensual. A more practical approach would be to transfer the Officers who are involved with each to a different police station. Out of sight, out of mind.

Matiang’i a achane na jamaa watombane.They have the right.He should explain to Kenyans why his useless IG,Nzioki has failed to arrest the lady who killed a man in Gitaru.Explain why people how people are being killed daily around Gatanga,Thika and Nyeri or how the corpses are being dumped there while Nzioki boys are the only ones enforcing the curfew?Are the police involved in killing and dumping bodies in rivers?

This guy is more stupid than he looks. There might be a problem there but that is not a solution. This is 2021 not 1921. Make all work places safe.

@Matiangi, your heart is in the right place. You should consult your lawyer, or the AG, who will tell you that you have no powers to do what you are saying you will do. I don't disagree that relationships within the Police force are a problem, but 'banning', or 'monitorig' them like schoolchildren is not a solution either. They will just go underground. Just transfer 'lovebirds', so that they don't work in the same Police Station. Problem solved, no laws broken, and more importantly, nobody hurt.