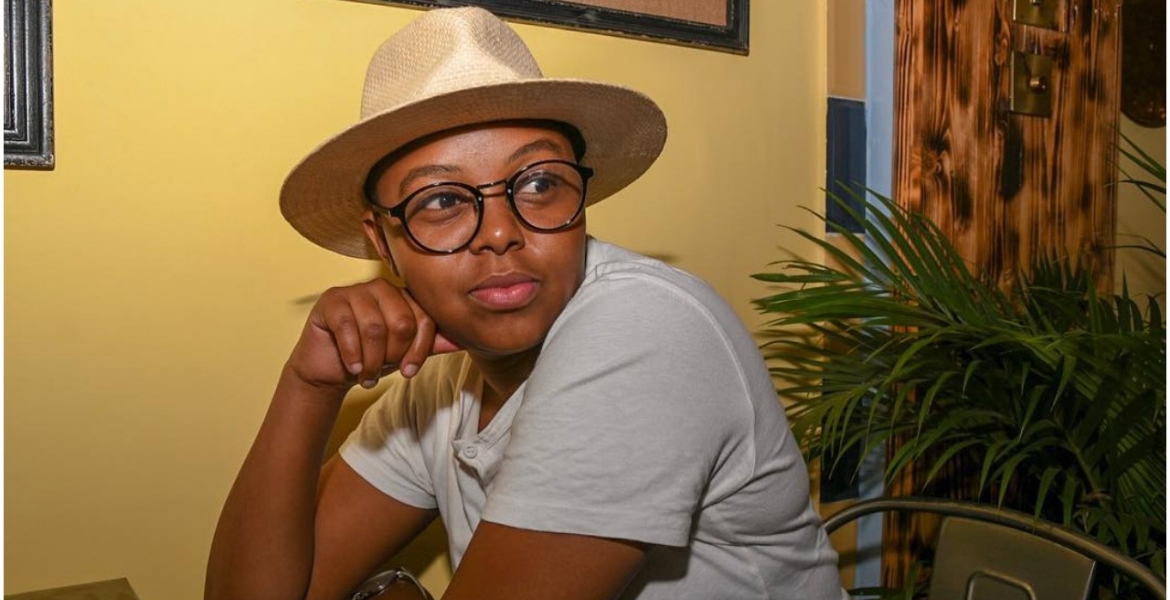 Kenyan media personality Njeri Makena has come out as gay.

Njeri opened up about her sexuality when she appeared on TEDxParklands, an event geared towards growing the TED and TEDx community in Kenya. The program is aimed at showcasing powerful ideas that help to shape the African narrative.

Njeri, who is the founder and CEO of Bold Network Africa - an organization that seeks to educate the society in Africa about the LGBTQ community through films, documentaries, and training - said it took her years to accept that she is gay.

“I remember for the first time in my life after very many years, I looked at the mirror and said to myself 'I am gay, I am unique and this is my truth',” she said.

The former BBC journalist also recalled the day rumors about her sexual orientation went viral on social media after a girl vandalized her Mercedes Benz over claims that she cheated on her.

“I remember that cold morning of July 2019 when I woke up and looked at my phone. I had over 1,000 messages and over 500 missed calls. My blood went cold. I knew something was wrong,” she recounted.

She says families and friends who knew about her sexuality deserted her for fears of being judged for associating themselves with her, which made her fall into depression.

Njeri, who is also an actor, further noted that she always wanted to take up roles reserved for men but often faced criticism.

“I believe that gender identity is one’s personal experience and perception of self,” she explained.

She quit BBC earlier this year to focus on building her organization Bold Network Africa.

Stinking sewage systems devolish mashetani.For the guys who believe in the bible it clearly says such idiots who practice hii nonsense they will b locked outside heaven with dogs.

Makena, Memye, you are a couple of idiots. Her sexuality does not negate or diminish yours. Look closely in the mirror and you might recognize your denial. Do you have some gay genes in you? Fools.

Wewe Mwangi stop your hate on gays,lesbians or shogas.It won’t be my first time kutomba both women(husband & wife) in one bed.But you cannot win them if you think you are more human than they are.You have to treat them like your wife.Pole sana na uache kujisumbua bule.

Menye, are you sure you understand English? My post was pro not anti.
Again,fool.

Mwangi! Morris Menye just came out. Ok? He just announced his Change of Citizenship (from Kenyan to Sodoman).

Menye is pretty good and coming out from the hole in his rear end! That is his problem alone. I’m kind of tired of idiots here advertising their weird sexual practices to pull a sympathy card! Someone must be very sick to be pounding another person’s hole! That is sick!

Reading her story here,its obvious to me that she did not chose to be gay.Besides that, why do people put too much emphasis on sex? Leave it in the bed room,or whereever private place you conduct it...
Are we so slow in accepting homosexuality as not being achoice because it goes against our steriotypical beliefs?Or may be religious beliefs?
Iam sure with time, people who reject homosexuality will come around,just like those who used to think that being left handed was"abnormal".It is believed that about 80-90 % of people are right handed.It is also believed by scientists that about 90% of people are heterosexual. Do you see where Iam going with this?Live and let live.Especially when no harm is being done.
Even if homosexuality were achose,so long as they are not choosing you,what's the big deal?
And not Iam not ahomosexual,but even if I were, Iam still ahuman being with alot to contribute to my society,positively. A human being should not be defined by their sexuality,but by their contribution to society.Iam sure Njeri is doing alot more good for society than alot of heterosexuals.My two cents.

Homosexuaity is not normal. God made a woman for the man why did he not create him a man. if we all become gays means no reproduction end of world. i have a niece who was married when her spouce cheated on her she decided she hates men and turned gay out of hate . how much do we know about this mentality ? we know nothing but you are what you make yourself and why has LGTBOs become more important than hetero . it is all about them thought they are a tiny% of world population. Give me a break

@ Guest,and why did God create hermaphrodiates? And rest assured that gays will never make the world population obsolete. They are only 10% of the world population.If you are worried about that, I would be more concerned with the heterosexuals that dont reproduce.
You niece's situation is not the same as Njeri.If she chose to hate men,she might get back to her senses,or may be this time hate women.She is confused.
Finally I would rather have a human being as aneighbor who is compassionate, law abiding,honest,and hard working,thus contributing positively to society,his or her only issue with society is his/her sexuality.I am sure you will agree with that.

We don't have issues with someone being GAY...that's there problem...but no one talks about you and I...
What's so special about her?
They are using the media to gain their 5m minutes of fame and trying to gain some sympathy.
Tuachisheni UJINGA.

You put it well and clearly. People do worse things, yet they are so strong expressing stereotypical views.

Whatever! No one straight person ever came here to say they are straight!

Si keep your ways of life to yourself and stop capitalizing on your current situation to profit from it!

Let private life style be private the whole world do not need to know.

Homosexuality, or being Gay, is usually treated as a 'Foreign culture', or 'Western influence'. When growing up in Kenya, there was this guy who who used to like touching male genitals whenever he was drunk. It was clear that he had a preference for male genitals, even though homosexuality was not even openly talked about then. He later became a primary school teacher, and I was not surprised when he was accused of sodomising boys, and irate parents stormed the school. Since nothing could be proved, he was just transferred to another school. My point is that these things are also in African societies. It is just that Western societies are more open about them.

I’m coming out as Straight. I’d like an article about that.

You deal with grayish nast tendencies! Is there anything special about screwing another man in the ass!? Keep your nonsense to yourself! Who cares what you sleep with to gratify your sickness! You deal with your personal issues!

Mashetani mastinking sewages mafi ya bats 🦇.They all belong to Hell to burn like shit.Bure kabisa

Go lick pussy young lady, who the fuck cares. If a few rocks have not landed on ur head in the streets of Kenya then this is not news but waste of space.

You seem to care and very insecure of what she does! You should be happy she left all the men to you to service you. You @shaka have a huge problem with female anatomy! Is this because you spent all your time evaluating men and you have never seen the private parts of a female? You must see a good doctor to fix your very small brain!

You don’t even know how a pussy looks like o smells @ Shaka! You are still a toddler in diapers and no wonder you get so excited when the word “pussy” is mentioned!

I don’t understand why the world has to be notified when these individuals “come out”. No cares if you are gay. If this lifestyle was so normal then we wouldn’t need to notified. I don’t condone the lifestyle but keep it to yourself. I don’t judge either. God is the ultimate Judge.
One thing I’ve noticed with the Kenyan brethren from comments on various articles, if we don’t agree with something, we result in passing insults and name calling. We can respectfully give our heartfelt opinions.

@KK, its unfortunate that some of our citizens get insulted when someone else has a dissenting view. Is not that what democracy is all about. Yes we can respectfully disagree and not insult each other ,or pull pangas ready to chop the head of those who disagree with us.
My take is that, if you are right,just try to convince me that Iam wrong?Being objective is the key. Be open minded help one to take in all the relative information ...

It's a streak of intolerance that runs deep, especially among the deeply religious. Many won't even bother with getting to convince you with argument but resort to talking about bibles and traditions followed by the obligatory insult when they feel their dogmatic position is being questioned.

Now look at this one getting himself all confused. I thought most kikuyu men are intelligent? What did you eat last night! A chapati that has been sat on by your significant other!? Wow, demons start talking out of the blues..

They come out only bec Hollywood with an evil agenda that is antichrist, anti family, anti natural order, are promoting it. Like atheist if you hold a gun to their head they will cry out to God because in their heart they know God exist. Just keep stuff in the closet and everyone is happy.
I'm straight and not screaming about it because it is natural.

Stop advertising your “straightness”. No body asked you! Are you sure you are straight whatever that means?

No he is not “straight”! He is as gay as you can imagine. The other day he said he prefers his brother in law than his ugly wife. They all live in a small bush farm hut with some humped cows in mugotio! Who knows what goes on inside that mud hut!

How I WAS CURED FROM Lungs cancer DISEASE  .
I never wanted to post this testimony here because i don't want to violates the privacy of this page, but Is so important to pass this information to everyone who has been finding challenges of getting proper cure for Lungs Cancer, Chronic lymphocytic leukemia and Breast cancer   DR OSO medicine is a perfect remedy to all kind of diseases, contact Dr OSO for treatment, my Lungs Cancer of 4 years within the space of few weeks, was cured through Dr OSO remedy. Reach him via email:
drosohaberhome@gmail.com
call/WhatsApp +2348162084839

You can also email me for more info about DR oso  via troyabl100@gmail.com   ALL THANK TO DR OSO .