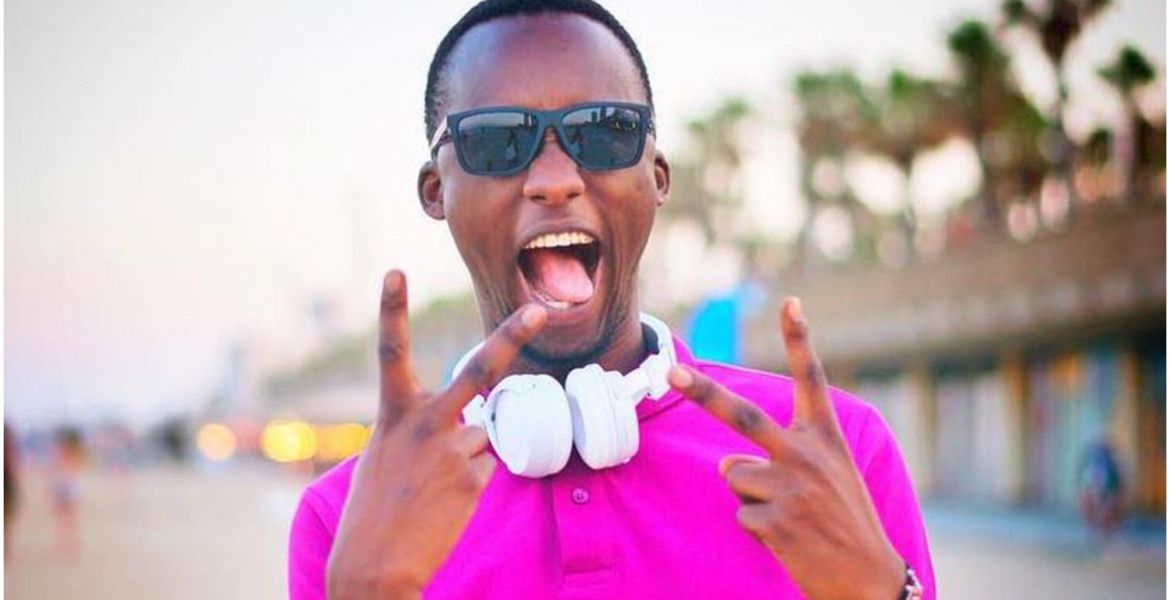 Kenyan blogger Xtian Dela has caused a stir online after declaring he will contest for the Westlands parliamentary seat in 2022.

Dela whose real name is Arthur Mandela says he wants to become the voice of the lesbian, gay, bisexual, and transgender (LQBT) community in Kenya, a move that has sparked a heated debate on social media.

He argues that it is time for Kenya to legislate laws that protect members of the LQBT community instead of criminalizing and insulting them.

“Let’s be REAL…Most young people in Kenya are part of the LGBTQI community! You and I both have very amazing gay friends and we have NO issue about it!! If we have no issue with them personally, why don’t we PROTECT them PUBLICLY & constitutionally?” he posed.

Dela, who is also an influencer and producer, called on other like-minded people to help him get to parliament and push for the agenda of LQBT people.

“People should be FREE to love who they WANT in private and public! Love is love and it’s high time KENYA embraced that!! If we believe we are created equal, the love we show each other MUST also be equal. No Cap!!...Why live like a THUG in hiding Just because of LOVE?!...It’s high time EVERYONE had a voice!!”

Below are some reactions from Kenyans on social media.

Gibson_munyoki said, “If you want to make it in Kenyan politics avoid such topics.”

anoni.mas said, “You got me on this one. For once I’m gonna vote. Your open mindedness is not from this continent 🥳🥳🥳🥳🥳.”

I’m all about equal rights for everyone but why do the individuals of LBGTQOIPDKLXV community need special laws? You love and sleep with who you want. It shouldn’t be any of our business. Uhuru said it well, gay rights are a non issue in Kenya.
This dela guy should speak out creating jobs and improving the economy and not gay rights. Even these gays will needs jobs. Helps build a sustainable economy then fight for these non issues that the average Kenyan doesn’t care about.

There is nothing Right about Homosexuality. If your Parents were Homos, you would never have been Born. You would have Wasted in your Mothers menstruals. Idiot?

You have so much hatred in your heart.

Of course I hate homosexuality with All my Heart.

What is hateful about what he said? Give me a break! He just used colorful words to help this pink dressed young man be a real man!

So true! No rocket science here.

@ KK,all Kenyans should help build a sustaible economy,especially those with capital.Equally all Kenyans should fight crime,and evils of the society. And also equally Kenyans should enjoy liberty, freedom,and pursuit of happiness.I think we all agree on this. But gays say they are discriminated against when it comes to;
a)Marriage
B) adoption of children
c) acceptance in society
d) violence against them.
Is this discrimination warranted?

@Maxiley Your points are well taken. Even if gays were to receive right to marry or what’s so ever. Kenyan society will take years to accept this lifestyle. Yes they can marry but I don’t think violence against them would stop. For contrast purposes, racism still exist in this country even though there are laws against it. Tribalism still permeates throughout Kenya even today. So even with laws protecting the gays, they still stand to be anomalies in the country. They stand to experience prejudice for being gay and from certain tribe.

Jamani kila Mtu wants to be next MPs, MCA or Governor

Dela you're an IDIOT who should never have been born.

Whether u like it or not gay people deserve rights like all of us. If u like to play with nuts, good for u, if a woman licks the utamu part like it tastes like Big G, pliz keep licking n ladies if u tire i can help, but if ur gay u do not deserve the treatment of rocks from the mob or long prison stay. Now to this idiot who just ruined the chance of getting votes, just like it took time in the USA n other parts of the world to accept gays the same will apply to Kenya n other parts of Africa. If ur only point to run is to push for gay rights, buddy stop thinking with ur ass n use the coconut in ur head as u ain't goin to win shit.

We have to understand homosexuality is old as hell. I'm not trying to justify it.
But, everyone has a right to decide their destination.
My only issue is GAYS WANT TO VIEWED LIKE THEY ARE SPECIAL. EF THAT.

AIDS is knocking in your Dirty behind; ready to Catch you; to Kill you.

Your own personal business to behave the way you want around those who act like you! But remember that others shouldn’t be burdened by your way of life!

I personally live a normal life. I have never gone in public showing out my tongue like in crazy or possessed by demons, and also asking for special laws to protect my behavior.

And, and if those I have sex, I don’t go around telling every body who i patterned with to have a good time.

Why should you be protected for sleeping with other men? Just wondering because now you are asking tax payers to spend more money on your ugly behavior but again you don’t want us to discuss why we are paying for that way of life.

Stop acting weird in public places and then tell us you are gay! No body care if you dress in women clothing, put on make up, high heels 👠 and all. That is your own affair nd please don’t force it on others.

We have other hot issues to deal with in a covid19 world, such as kids sleeping with food, no schools, etc. please get a grip on life and stop drawing unwarranted attention at others cost!

When you don't know who you are, you become anything; when you dont know where you came from, you do not know where you are going.
If you have no culture, you pick up anything that comes your way?
What is your name? Or shall we call you anything?
How many gay people in Westlands that you are going to represent?
Sodomy is one of the first evils that were committed on our forefathers by our colonizers.
Good luck in representing and putting on display that evil. It will remind us about our history and those evil deeds that we are about to come face to face with.
It's time for revelation and restoration!!

This she guy is not mature enough to represent westlands! I call him a she dude because he does not know who he is! He is very confused by all natural standards!

He can’t even articulate his own body let alone the issues affecting other folks in westlands. Don’t waste your vote on someone who is not mentally fit to lead.

Leadin others comes with certain code of ethics governed by a good moral belief. This dude is playing around with important serious issues. He needs to find himself before he can get out wagging his tongue like someone who has lost his mind!

Aah Mwakilishi.. what is this trash article about??? You have already unwittingly given this wannabe MP more free publicity to parrott his mzungu liberal agenda on us!!
Please be careful with the power you have Mr. Editor. I see another article popping up about sijui gay singers "coming out" as if these are kenya's multi-platinum heroes with COVID vaccines. With your help, in 2022, they test the waters and in 2027 they learn from their mistakes, by the time in 10 years, you will be shocked theyve used AI to win their sneaky agenda into society like Trump did after losing 2012 elections. You'll be worried when you go to hospital about the male nurses looking at you post operation.
To the fools saying ati give it more time, you realize you are already admitting defeat by refusing to uphold your own cultural values. Someone said those who have no clue who they are will identify with anything kweli wasnt kidding. Why cant WE change the mzungu thinking over time. Its self-hate of the highest order to adopt foreign cultural beliefs as yours without question, yet cant force your own culture on others on your own land.
In the middle-east, these homos would never ever dare that agenda there. Hell, even Clinton put on a hijab on state travel there. Juzi UK muslim schools said NO to this trans,bi, gender sex-ed to young primo kids and it was pulled off. You have to stand your ground, dont leave it to the church/ conservatives to fight that battle. Remember these 3 secrets they dont want you to know. There are less than 1% of the US pop of males who identify as homos - look it up. Then, also know there are more africans than europeans in our world, theyve tried all sorts of ways to reduce our numbers- if you know your history you will know from the past till as recently as the white billionaire gates who had population control as his priority mpaka it backfired as he himself was found to be kulaing his ex-gf and its unknown how many other kids he has. Anyway this fits perfectly with their pop control but we need to resist. Even Obama was booed by uni students and the normally drunk prez was quick to publicly humiliate him after he went off speech and tried to patronize africans ati gay rights while ignoring more pressing issues, all the while travelling around Nbi on chinese built roads that were never given on condition of africans relinquishing their cultural practices. Anyway, the 3rd secret is that in 2050, 1 out of every 3 humans born will be African. If you think numbers dont matter, ask yourself why China is a threat at 1.3 billion ppl to superpower US. If you have a small population, you invariably lose over time and wont maintain much lead.We need to start NOW with African agendas I say first by addressing 3rd world issues- all these foreign powers that enslaved, colonized and exploited need to equalize the playing field and also pay up for their past transgressions on the global south. If you cant see the cultural practices that led to our peoples suffering, disenfranchising and even attempted genociding, then you have no business telling what society should be doing.