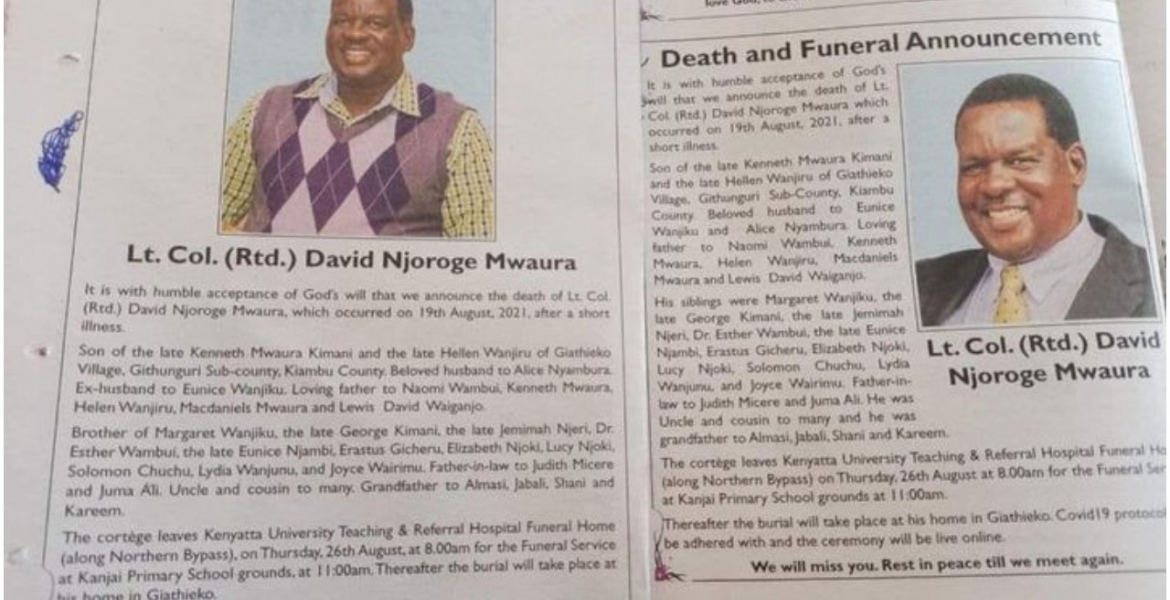 A Kiambu family has placed two parallel obituaries for their deceased kin in a local newspaper.

The family of Lt. Col. (Rtd) David Njoroge Mwaura, who died last week, appears to be divided on his marital status.

The two death announcements bear the same message except for the marital status of the deceased, with the first one indicating that he was married to two wives while the second states he divorced the first wife.

One of the obituaries names Eunice Wanjiku as the first wife to the deceased while the other labels her as a former wife.

“Beloved husband to Alice Nyambura and Ex-husband to Eunice Wanjiku,” the first obituary reads in part.

Njoroge passed away on August 19th following a short illness and will be laid to rest on August 26th at his home in Giathieko, Kiambu County.

Wait until mpango wako do start rearing their ugly heads especially if there is money/ property to be fought for!

That commotion will make him stay in the mortuary for more than an year as they sort out which woman gets what and so forth! You can see it has already started! You lay on the bed that you make, even in death!

Now these are the problems of mipango ya kando with no clear plan or goal. Probably one was marriage by church and the other customary. Unless there is wealth to fight for i wouldn't bother. Unfortunately if kids are involved they are the ones to be followed by embarrassment. Thats why living wills are important..just my two,cents