Kenyan Businesswoman Gifts Son a Mansion on His Sixth Birthday 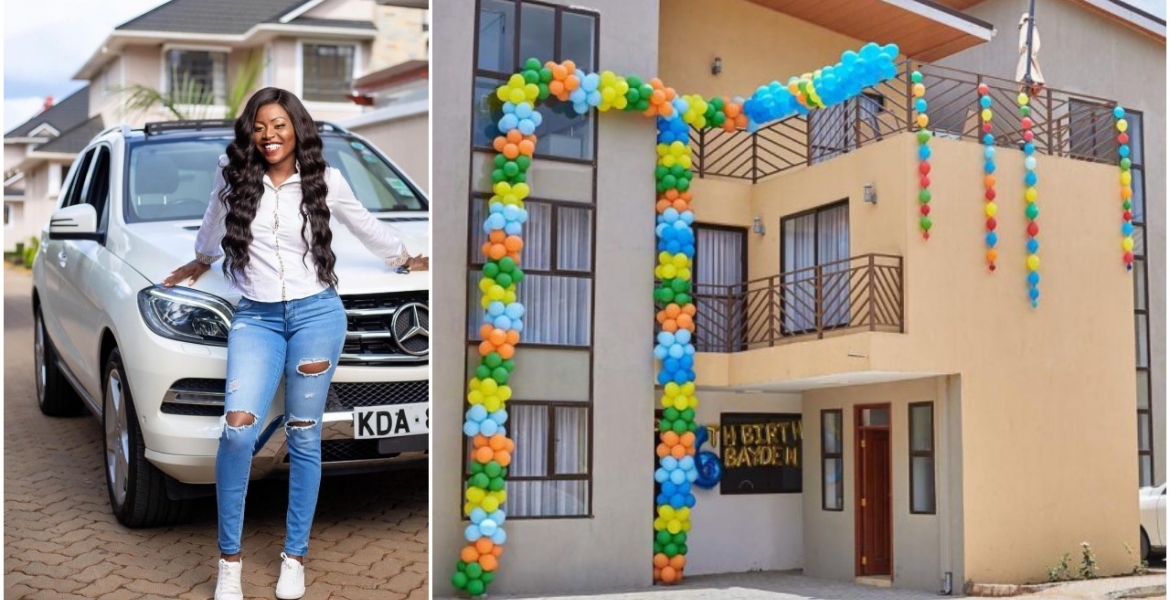 A Kenyan businesswoman has set tongues wagging after she gifted her son a mansion on his sixth birthday.

Mercy Maluli, who owns a men’s clothing line in Nairobi, said she decided to buy her son Brayden a house because the boy has always dreamt of becoming a homeowner.

Through social media, the flamboyant business lady shared photos of her elated son receiving the keys to his new house.

Maluli said she had committed to buy the young man a house, adding that she will always go all out for her children.

“He has been praying for a house cause mummy promised one. God answered and he is the newest homeowner in town. Anything for my boys. To brighter days ahead,” the Devine Collection owner captioned the photos.

Her post elicited mixed reactions on social media, with some online users hailing the businesswoman for giving her son the best treat on his birthday while others believed that she went overboard with the present, arguing that a six-year-old was not ripe to be a homeowner.

Stop the nonsense. Buy your 6 year old son a toy house. That is what he need at that stage of his life.

Poverty works this way. You always give your kids an early start in education, in wealth creation and everything else. That is how it is done. Look at all the millionaires in sports like Maradona, Messi, Serena Williams, Tiger Woods…etc. They all started early at the age of 1 year. You don't do that, you are paving way for poverty and you will end up looking up for handouts from your kids. Stop it!

You are wrong. The people you have mentioned were not given assets at the tender age. They were taught how to play sports from the early age. They took many years to acquire the skills, discipline and ethics needed in sports. They got their wealth through their hard work. If you give kid at that age of 6 assets they will never see the need to get up in the morning to go to work or school. A wise parent will not disclose what assets they are giving their kids until are in their 20s.

Don’t know why this has to be advertised but that’s good move on her part. Son now has a good investment.
I’m in America and I can only afford one mortgage. My son will have to buy his own house and car. Good luck boy.

He is a young boy not a young man. What you have done is very irresponsible and unlikely to help this boy as he grows up into a man. What he needs at this stage of life is a home not a house. Nothing is said about the boy's father- why is that.

hawa wanawake wana drama mingi sana,study developental psychology it will help know wat a child needs in every stage of life, and just coz u have money deosnt mean u think ur child doesnt need to develop thru every stage

Good for her and her son. Apparently social media is mostly for showoff so as to elicit envy from those that have less and don't live a life of opulence.

A good thing if she's teaching the boy responsibility, hard work, respect, value of work, biz skills etc. It is clear he lacks in how to be a man curriculum since the dad isn't in the picture.
All the best boy child.
The mother will be on jalas, tuko, and other shows soon. Marketing tactics alright

Is the 6-year-old single? I have a 6-year-old niece who is looking for a rich 6-year-old Kenyan-born girl for friendship.

Does your 6-years-old niece always dream of having a rich 6-years-old husband? This could be her lucky break! 😆

Wash wash is what people are praising this girl for.Some years back her husband was arrested in fake gold scandal.We all know a clothing store cannot generate that kind of money: the clothing store is being used for cleaning money.

Thanks for confirming what I suspected! It's usually the wash wash type who flaunt their ill gotten wealth.

Oh! They have now learned to go digital with their token opulence! So she is unloading a stolen house to a kido to avoid paying taxes! Oh. I see!!

Coddling the little man then she'll be surprised when he start having emotional problems & spectrum symptoms.
That will be an entitled brut she created!

What's going on folks. We are witnessing this trend of the rich showering their children with expensive assets.Of course you are free to spend your had earned money anyway you want,or for that matter even that of which you stole...
To me, the best gift you can give your children is not material.Give them the best education your money call afford.Give them the best love your heart is capable of.Give them the best and health food Give them strong foundation in respect,work ethics,integrity,and finally let them have fun building their future,based on the building blocks you laid out for them. But always be there as a parent should they need a shoulder to lean on...