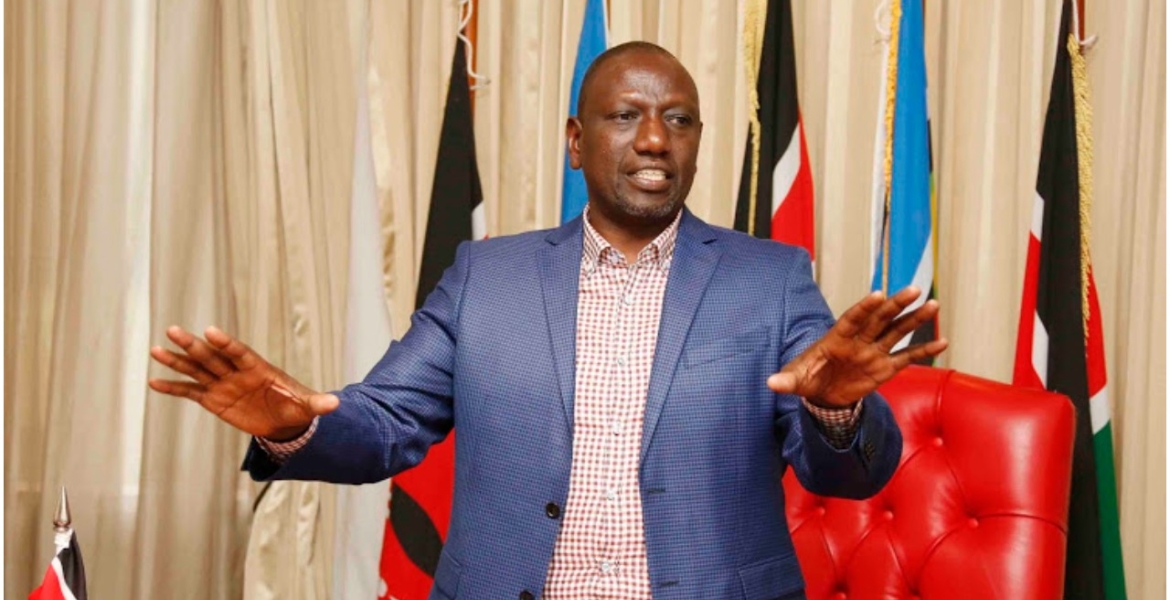 The Karen Residents Association has written to Deputy President William Ruto complaining about the rising cases of insecurity in the area.

In a letter dated November 9th, the association said it had received numerous complaints from its members who live near Ruto’s official residence and those that use Karen Road.

It indicated that members constantly complained of a massive influx of insecurity cases perpetrated by people posing as Ruto’s visitors.

Residents also lamented about the occasional traffic gridlocks caused by the huge political delegations the deputy president hosts at the State-owned residence.

“We have received complaints of insecurity, noise, and traffic gridlock attributed to entourages entering your official residence. Residents have complained of rising cases of mugging along the route conducted by aliens masquerading as visitors to your residence,” the association’s Chairperson James Hirst said in the letter copied to the Inspector-General of Police.

“The association is highly alarmed by the ever presence of suspicious persons roaming around the area against its rules on loitering. We wish to notify you of rampant traffic gridlock as a result of visitors parking on the roadsides and wayleaves awaiting clearance to your residence.”

He added: “This has caused unbearable inconvenience to residents commuting along the Karen road and adjoining lanes. We, therefore, request your office to speedily and conclusively look into the above matters, safeguard and restore peace and tranquility in our neighborhood.”

Those creating insecurity are just fulfilling Ruto’s mission of being a gangster! Ruto us part of a terrorist group and so his terror friends are now creating insecurity, theft and noise in the entire Karen neighborhood! The Home owners Association should evictiomsend Ruto an idiot victimized notice!

King of corruption has many coming for bribe and future bribes

UDA stands for "United Devils Association." What do you expect from this devilish association?
1. Theft of public property
2. Endless Lies
3. Giving terribly misinformed Kenyans Wheelbarrows while Samoei drives and flies everywhere while every trip is paid for by state funds.
4. Samoei wishes that people forget Kiambaa holocaust! He should be reminded every day that, until those responsible are arrested and prosecuted accordingly, it will not be over.
5. What happened to Kimwarer and arror fake dams?
6. Instead of Samoei helping the president, he spent state funds going to school, campaigning, and on Sundays bribing crooked church leaders.
SOLUTION:
Since he spent state time studying instead of helping the president, he should be assigned a teaching position at the university come 2022.
If the duties of a vice president are what we saw Samoei do for the past four years, this position should be eliminated.

@Imara, the Kimwarer and Arror money has been going to the crooked church leaders and to buying wheelbarrows. Those who collect those wheelbarrows will forever remain poor and cursed. Hata Mungu hapendi ujinga watajua hawajui.
And I beg to disagree- the man should not be let anywhere near our university kids. He is rotten to the core with a fake degree.

Which man are talking about? Miguna Miguna or the world class thief WSR? Ruto shouldn’t let near anything - students, Mashamba, banks, even entire country because Ruto is a thief! Any man who kills women and children should be bundle in a Beehive and rolled into the tallest Cliff!

The best performing governor is Kivutha Kibwana. We should all rally behind him and let him "Rwandanize" Kenya come 2022.

You can see how siasa is everything in Kenya. The homeowners association did the right thing, they saw a problem and reported. Now, its upto CS interior to take it up and address security and traffic in the neighborhood. It's not a UDA/Jubilee/ODM issue, but we can't think outside politics.

UhuruRaila are so desperate to now incite Karen neighbours to complain to get rid of the 5th president of Kenya Mr Ruto.Just sell the DP hse to me if you are so scared of Ruto.

To you everything is politics. You commit a crime of any kind and when caught shout loudest it's because you support Ruto

Any fool who support Ruto is a thief! They want a wizi elected president so they can steal in totality! Wezi hawa!

You thief! The diaspora are closely watching your theft! Sure you will finish their unfinished house with all the money in your pockets! Tend to your bumped cows to put your kids to school! Your myopic set of eyes is surely blind! Cant is Ben be ashamed to support a thief!

In your weird dreams! There will never be a Ruto presidency in Kenya! The problem with you kalenjins is that you support your own thieves! No adult in the house to tell Ruto to stop stealing! Good thing you only got one vote! Keep registering your dead uncles to vote for the most corrupt idiot in Kenya!

This thief should be rolled down the cliff tied to WSR! These are the sellers of our country, they have stolen our country blind!

Ruto is becoming a burden to Kenyan. The guy campaign seven days a week non stop. His security and transport is funded by taxpayer. More police officers has to be involved

Yaani, this Karen association waited until now to complain about the noise? In 2013 & 2017 Ruto wasn't being visited? Stop this propaganda of siasaring everything to do with 2022

@ Mugikuyu: Ulisema, "...And I beg to disagree- the man should not be let anywhere near our university kids. He is rotten to the core with a fake degree."

@Maoni mengi tell them tell them Ruto haters.In 2013/2017 Ruto was a saint but now he is a thief??We know Gas molasses thieves,42 against 1 tribal haters,idiots who sweated themselves,families who stole maumau lands in kenya,Pandora papers??Can someone please remind me who are thieves again?

Huyu Ruto ni Mwizi kabisa! What else can you say about this pariah conman? Nothing more! He is one big thief!