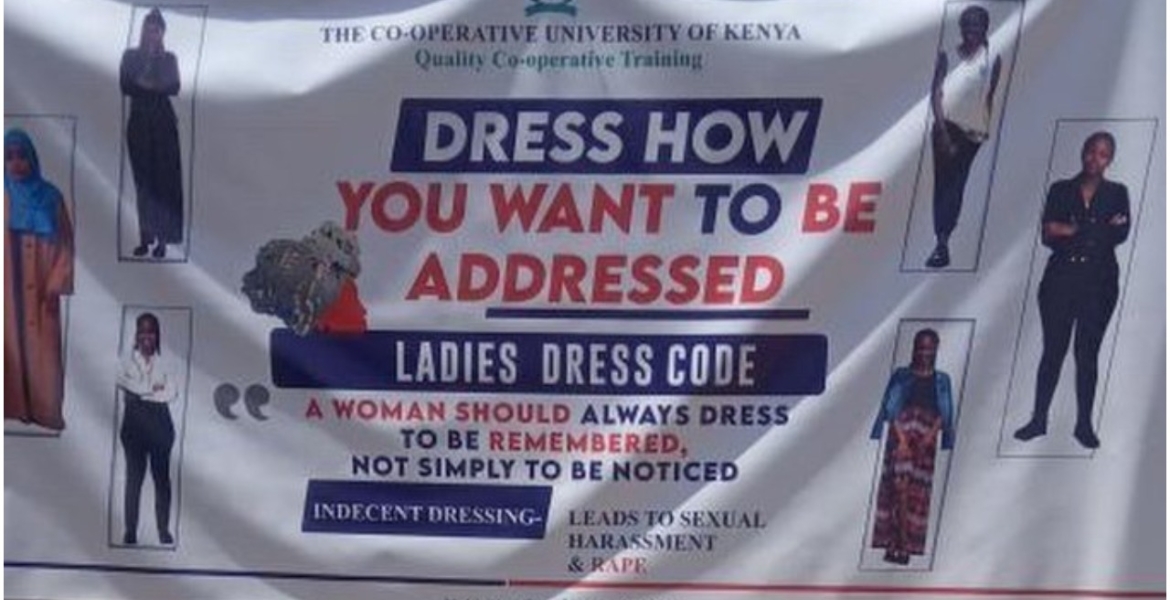 The Co-operative University of Kenya has apologized over a banner linking rape to indecent dressing.

This comes after a picture of the poster that was displayed at the institution’s main gate went viral on social media, sparking massive uproar.

The advert shows what is considered a ‘decent’ dress code with pictures of various women wearing such outfits.  It also featured messages suggesting that the type of clothing a woman puts on may lead to them being sexually assaulted.

“Dress how you want to be addressed. A woman should always dress to be remembered not simply to be noticed,” it states.

It adds: “Indecent dressing leads to sexual harassment and rape."

Following the online backlash, the university issued an apology, saying the banner was made and displayed by students without approval from the university management.

"Our attention has been drawn to pictures of a banner circulating on various social media platforms on Thursday, November 25th, 2021 bearing a message about a campaign being organized by the Student Governing Council (SGC) on student Dress Code," the university said in a statement.

"The erroneous messaging portrayed by the banner is misleading and highly regrettable. We sincerely apologies for the miscommunication."

The banner bearing the erroneous message was put up without the approval of the University Management and it was brought down immediately it came to our attention. Appropriate action has also been taken to ensure that the same does not recur,” said the institution.

It is an insult to men to suggest that they cannot control themselves when they see women dressed indecently. It also implies that women dress like that to attract men...
Iknow,I am going against the tide, but men should learn to ignore this kind of things.
What I would like to know is ,was there lots of raping when our ancestors walked practically naked? I doubt,but they were just as human as we are right?
I even dont have to go that far.In africa, you will find many tribal people still dressing"indecently",and you hardly see men gawking. So what's wrong with "modern men"something has to be...
I think our attention and blame are misdirected when we tend to blame women for being raped.Men being the rapists,are the problem.Solution is to castrate rapists.Its that simple.

Maxiley you don't know what you're talking about. You sound IMPOTENT, CASTRATED or just GAY🥳. Or you're a WOMAN; and therefore don't understand the Mind, Anatomy, and Body Functioning of Males.

A maleshovenistic pig like you is the main problem! Your mother never taught you the right things to do! You probably would rape your own mother; right?

Disrespecting women is equally disrespecting you! What kind of a DICK do you have that your little brains can’t control!? Motherfuckers like you simply make me sick!

We must educate each other to curb the stupidity of hurting others to gratify our pop mentality! Go to hell, you son of a bitch! We are talking about adult issues here! We need to find tangible solutions to this rape problem in Kenya and Africa! Shame on you!

Just point out where Iam wrong,and correct me.I am willing to learn.So far you havent made any sense to me. And I know very well how a human body works. The brains controls everything,we dont go by instincts like animals. BTW, so what if Iam awoman? Women as smart too,smarter than men in most cases.

@ Mlachake says Maxiley is right in a major way... I agree.Our men should behave like the bushmen of the Kalahara desert. They see skimpy women all the time,but dont harass them.Respect.

@Maxiley - the African society is a man eat man society! The main cannibals are the idiotic law makers we elect and purport to think they are intelligent to make the right kind of laws to address societal issues! To include the right to privacy!

Where have you been man? You kind of got me worried! These days you hide a little bit folks start making all sorts of wild guesses!

You would be heading to jail real first if you touched a woman without consent in Florida! Let alone a woman; touching any body without consent will land you to jail in America! There is a mental deficiency with the black race! I say this with a lot pain but it’s true!

Why can’t the same laws apply in kenya! We got immature kids like Havi and others deciding for us! Poor elected politicians turning the cheek the other way when they see wrongs committed!

Just look at lawyers like your best friend Havi beating another female lawyer not too long ago! He is now in the dirty UDA, your party of thieves running for an MP!

Look at Miguna Miguna! These thugs influence the society! A group of Kenyans look up to them! But they are as crooked as it comes!

These bad apples are being celebrated whenever they belch nonsense! Things must change! And by the way, I was around Serasota Beach the other day looking for you! I saw your gal there but I didn’t touch! Laws apply here😛!

@ Wahid, I took a hiatus for afew days to relax on Sarasota beach with my sqeeze.
I like the way you answered that fellow. He almost sounds like an apologist for rapists.
Sex is controlled by the mind. During Olympic games we see all kinds of skimpy out fits worn by athletes.If it were wrong, them they should not be allowed to dress like that.
Yes we can control our behaviors.Just because awoman looks sexy is no reason to rape her. If you do you desert your nuts removed,because you are the problem .Good thing is most men look, think about it,and move on to better things.
Hey Walid, you have my vote should you venture into politics.

Maxiley In a major way you are right
And you a have a right too to your opinion
But fact will remain fact - men are very physical beings sexually and will see scantily dressed women in another light (sluts to be slept with, to be exact) The most valuable assets are always hidden from plain sight - gold, oil, wealth in general. You just don’t go around exposing your best assets / stuff.
Thing is, majority of women reading this will promptly dismiss it, even call me names. But ukweli wa mambo ni kwamba no man will respect a scantily dressed woman & to make it worse, we don’t tell you directly, we simply disrespect you quietly. We’ll however, feign interest in the hope that we can put a little seed inside of you & then continue hunting down the next easily available hole. BTDT

@ Mlachake,if the assets owners,in this case the women want to expose their assets,why shouldnt they? If it will cheapen the assets so be it.At apoint they will realize that the assets are cheap,and adjust,thus bringing to equilibrium , much like the market lassez affair works.
Any idea how our ancestor females were treated when they walked practically naked?

I think when it comes to dressing, It depends on how a woman carries herself. Iam here in Florida,surrounded by great beaches that attract pretty women to bask in the sun. We usually have picknics there with friends,and workmates.On the beach, the women I work with dress very skimpy,but they will not dare dress like that on the streets,or in office. My point being, there is alimit,aplace,and atime for what attire to use. And those how are"discordant" ,that is dressing in wrong attire at the wrong time,and the wrong place will certainly get disapproval and scorn of society.Women know this.
And as men, we do not have to overly be concerned about how women dress.They are human beings too,with rights. All we can do in learn to live with it,just like they do.Like our ancestors did.We have better things to do than arguing about skirts.What say you?