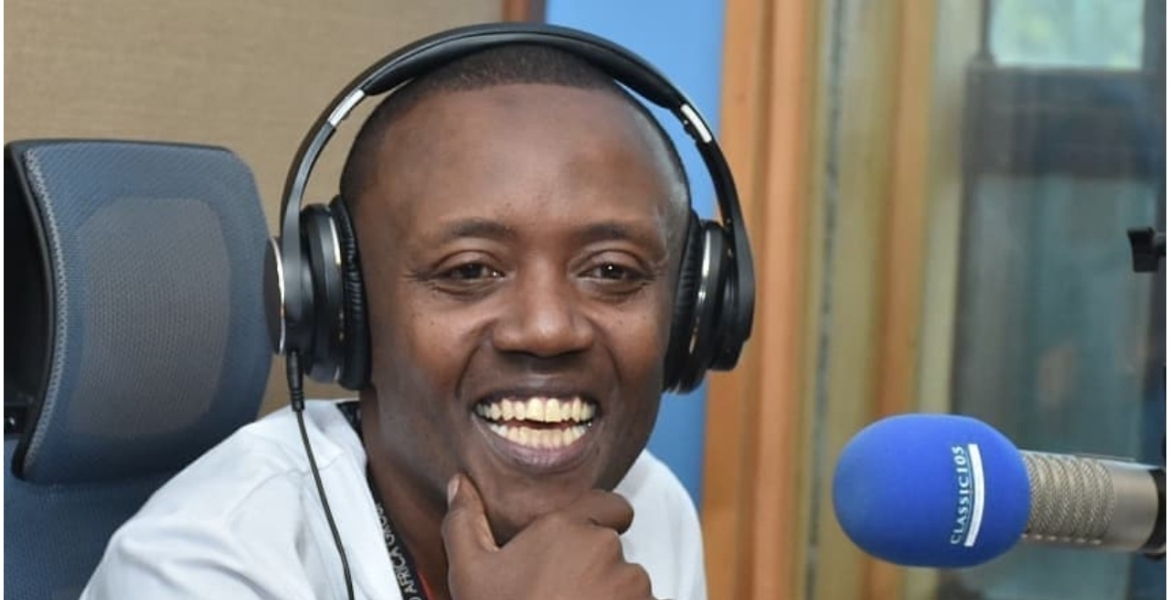 Media personality Maina Kageni says he is considering retiring from radio next year to focus on running private business.

Speaking during his breakfast show on Classic FM, Maina said he plans to relocate to the United States and probably establish a nightclub in Miami.

"Come next year I am done. I will be retiring from this radio job; I plan on running a club in Miami..." Maina told his co-host Daniel Ndambuki, alias Churchill.

Asked where he will be living, Maina says he already has a house.

Maina, who is one of the wealthiest media personalities in the country, also disclosed that he owns a condor in Miami.

"I will be living in my condor. I bought it kitambo,” he said.

In 2019, the radio presenter revealed that he took over the multi-million-shilling estate left behind by his late dad when turned 21.

“My dad died when I was two years old. Luckily for him, he left behind a will and after his death, it was entrusted to trustees. Immediately I turned 21, the properties were transferred to me,” Maina mentioned.

Maina, 46, has always made it clear that he does not desire to get married, saying he enjoys his freedom as a bachelor.

“I got a problem asking for permission to do what I want. If I wake up today and say I want to go to the US in two weeks, I will go. Do you think you can do that if you are married? You have to ask your wife for permission and that’s what I have a problem doing,” Maina told Jalang’o TV in an interview.

He added: “Some of the things I hear on the show about marriage are scary. It has taught me one thing, marriage is not for everyone but never say never.”

You need to talk to the right married people. My husband never has to ask for permission for anything. It is an adult discussion that happens in both directions.

@ Sara Muhoro, the man apparently is happy the way he is. I see nothing wrong.Do you think he is missing anything?See, he does not want a discussion the way you put it. He wants to just pack and leave.I am sure probably tell one or two people where he is going but not to request their approval.Remember he is talking about marriage. In other relationships,like work related,I am sure its different.Marriage is pretty much a choice among other lifestyles.
Dont you also agree that marriage is not for everybody? He said never say never,so he is probably a late bloomer.
Btw, who are the right people to talk to

Are there enough retired Kenyans in Miami for him to play golf with or he will be playing reggaetone for the hispanics and practicing black magic with the haitians in his side hustle as a Kenyan deejay.

Yep and right location for that..

I read some where that men think about sex every 7 minutes,or was it seconds... I dont remember.
@ Kimian Hamwe, the man did not say anything about sex,why is it on your mind? You must be one of those men that provided the data for the survey I mentioned.
Man with holidays in the air, covid ravaging ,people stressed,who has time to think about sex? Ok Itake that back.SEX is a stress reliever so I hear. Have to try.

I agree 💯 that marriage is not for everyone. It's a true blessing to see people who are true to themselves and do not succumb to social pressure.

Sadly many men and women suffer quietly just to please relatives and society. Others end up with messy divorces.

Maina is wise to live single instead of torturing himself and a wife while keeping up appearances.

This Kageni man knows nothing about marriage. He could be gay or something! Gay people too as far as I know are seeking to marry other men or women.

So, even if Kageni is gay, is that your problem?

Okay Maina - go compete with the rest of them in Miami night clubs just beware of cubana, Eastern European, mehicano/s.American /d** dealers / moguls there ........then 5 years later let us know how well you did. Wish you luck !

This Kageni man knows nothing about marriage. He could be gay or something! Gay people too as far as I know are seeking to marry other men or women.

The guy has two rental houses in Los Angeles,CA.

Welcome to Miami, my lovely city, Mr Maina. But let someone tell that no all that glitters is not gold. And there is no Raila's Canaan here. I think your daktari girlfriend has prepared you well. The best thing about America is that it gives you lots of curtailed freedom, prestige...I mean makes you look great, celebrity-like, smell great and somehow, Kenyan folks kinda "worship," you even things bills here appear like landfills. But you have money, lots of money. Just trend carefully. Things are done differently here. Don't buy things in cash here in Miami otherwise they will call the cops. Why? Drug money. This state is invaded by hispaniolas. When the going gets tough, you mix up with real hustlers here. Opening a nightclub here is not the same as opening one in Korogocho. Learn early terminologies: town hall meetings, decibels, city regulations, spousal abuse, child abuse, put your hands on somebody, nigger, minimum wage, under age, sexual harassment, opening hours, closing hrs, zip codes, IRS, minority, people of color, stand your ground, and no short cuts to get what you want. Don't be in a hurry to drive. The system is well organized. Ukenya hapa utakuangamiza. All the best Sir, you will know Mjuaji as you settle down: a know-nothing, know-less, humbled Kenyan tired of everything everybody here, including Trump and gang. Take my space.

Having lived in the US for 4 decades and seen it all from the good, the bad, and the ugly I wonder why anyone would come look for a better life style here if all is well in Kenya.

For a young person just starting out, this may make sense. Once you hit middle age and are as well established as Kageni claims to be, I honestly don't know why you would leave a life in Kenya-family, friends, the weather, the food etc for a life in the US where your skin color marks you for negative attention. He may eventually realize that Kenya despite it's shortcomings is a really great place both to live and to grow old especially for watu weusi.

Kigeni you are a gay. Move to Chicago instead of Miani and you could hook up with Jussie Smollett who is said to have a strong taste for African's men ass especially the Nigerians. You are an attractive fagget KIgeni

He wants freedom exercise his sugar🍭🍬bussy 🍑🍑 lifestyle. Let him come & dwell on his options. It's a free market.

What's your problem guys. Whoever wants to come, they are free. We are all coming. American life is like cocaine, once you indulge, you can't stop...

Haters..AL M.F Hafers. Here. Wakenya hamna uzuri na watu. Hamtakii watu mema. So all the single men out there who choose to stay single are gay. Hii group yoote inacomment hapo juu ni hopeless married men in failed marriages, turned wives in their houses and have no say infront of their family. @Mjuaji wewe ni ngamia Godoro wewe hakuna kitu unajua! Maina has lived outside Kenya before all those phrases there go tell your grandma.JIFUNZENI KUFURAHIA NA KU SUPPORT WAKENYA WENZENU. Then you will see a great improvement in your life.

Kumbe there’s a voice of reason & understanding
Thank you, sir

@Bobby kibe u said it very well my bratha.Only idiots who will sell of everything n retire in this fake majuu life.The guy will come out finally in the United state of gormolla.Am at 41 yrs having leaved majuu life for 9 yrs left there when I was 30ty.Give me anything but don’t mention me going back to that fake life ya mayuu.Wacha nirelax hapa limuru with my dairy cows/growing horticulture with free morgage no loans,waking up when I want not bin waken up by alarms to go enslave myself to pay mabills zenye haziishi.No way but Maina just go n come out like sauti soul nigga.

Kwani nini huwa mbaya na sisi Wakenya? Why all the negative comments and assumptions when all Maina wants is freedom to choose! Just be and let be! We can do better than this, my peeps. Makasiko tuwache jameni na tuinuane badala ya kuvurutana chini.