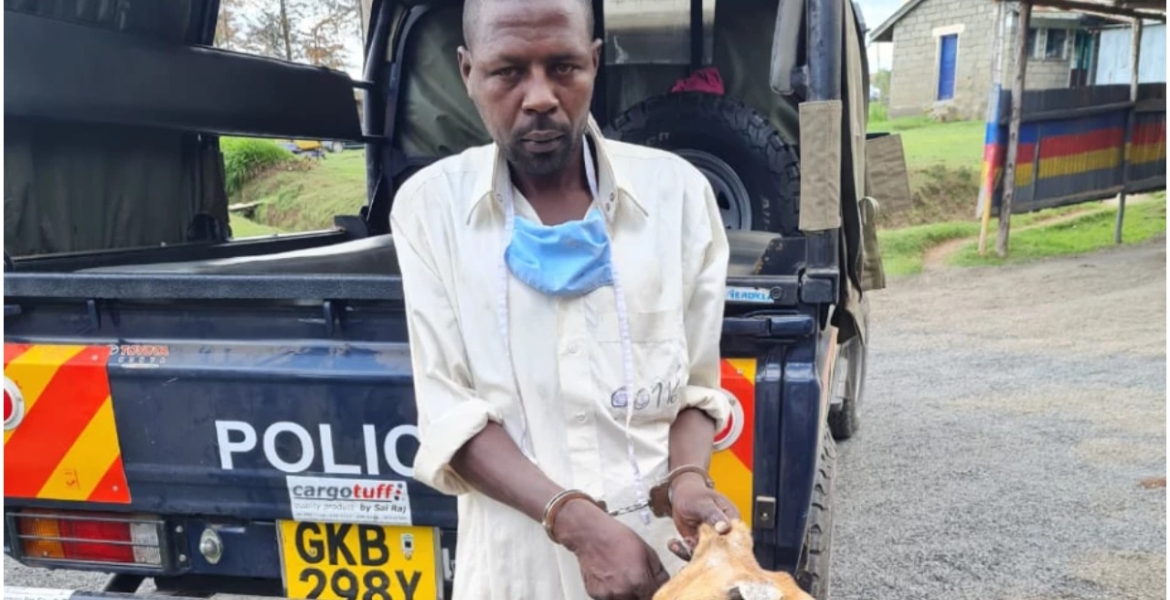 Police in Nyandarua County are holding a man who was caught hawking what is suspected to be fried dog meat in a hot pot.

Ndirangu Wahome, a samosa vendor, was arrested on Sunday while selling the meat to unsuspecting customers around Wanjohi town and slaughtered dog remains found in his house.

“Upon searching his compound, the following were recovered; a slit separate dog head, a sufuria which he used to cook the meat, blood stained knife, blood-stained panga and a wire which he used to trap the dog,” reads a police report.

Wahome was also found in possession of approximately 10 grams of marijuana and another live dog which police suspect was next in line to be slaughtered for sale.

Kipipiri Deputy Sub-County Police Commander Rashid Juma said police are seeking to establish how long the suspect has been in the business.

“We have arrested the man but I suspect he is not normal, a normal man cannot engage in such a business. We want to understand for how long he has been in the business, where he gets the dogs, and the motive,” Juma said.

Some of his customers said they thought Wahome has been buying meat from local butcheries and at the slaughterhouse.

“The samosa had a unique alluring taste with an equally enticing color, we never suspected it was dog meat. He was also selling fried, boiled and roasted pieces of meat. I felt like vomiting on learning what I have been consuming. It is disgusting. I wonder where he got the baking and roasting skills. He is a person I have known since childhood and could not suspect he could be in such mischief,” Jack Karanja told Nation.

Maybe that is what Governor Kimemia has been eating because he seem to have screwed mind. Very corrupt man but always outsmarting the system

At first it was cat samosa. Now dog samosas. What's next?

Next is "samorat" patties... very delicious.

He’d make a lot of money in China. Great idea but wrong market my friend.

Contrary to common beliefs, dog meat is very tasty and nutritious. I used to eat it a lot when I was a US Army solder stationed in Camp Casey in South Korea. Koreans call it Kegogi. I miss it.

I will play the devil's advocate here. Hey, is there anything really wrong with eating dogs,if they are inspected and cleared for human consumption ,and the choice left to the consumer?Some says its so tasty that if it wasn't the thought of eating a dog,people would rank it as one of the best meats to consume.Heck Chinese chomp on it...I bet one can make really good HOT DOGS from pit bulls...I personally would rather eat a dog than a monkey.Sorry my Congolese brothers and sis.It just reminds me too much our "ancestors". They are our cousins.
Indeed traditions die hard.Much like female circumcision.
My point is,where is the harm in eating dog meat?Took me along time to eat an alligator steak.Eventually,got used to it,and its just food like chicken to me.Florida gators are the tastiest...anecdotal yes,but come over and take abite and let me know.
Heck come to think of it, I might eat a jackal.Is that legal?
Bottom line , I guess is that,if the fellow broke the law, let him get punished.Probably adog bite would suffice.

U crazy my friend. Wonder why Ebola and pandemics start in Congo West Africa and Asia? Fill in the blanks

There is nothing Wrong with Dog meat so Long as it's Raised clean. Or does One need a License to Sell the Dog meat🥱?

Koreans and Chinese eat dog meat. They call it Kiugugi.

Philipinos and Nigerians also consider dog meat to be a huge delicacy. They eat everything from the skin to Matumbo. As a matter of fact, Nigerians only share dog meat with close friends because of the value they attach to the meat.

So beware what kind of meat anyone offers you to eat in Kenya and around the world.

@ Jackton, from the few comments I have read on this matter,on this forum,its obvious that any meat goes.The only restrictions would probably be religious. To day na de learn somethin new.If Oyewolo de give ama greyhound matumbo,I no go say no no .I go chop am well well..,

Nigerians eat humans too. Canniballism is widely practicised in Nigeria

🤣🤣🤣. Maybe mūrū wa Mūmbi was confused about hotdogs. Or he might have learned something from all those Chinese in Kenya. He got Mr. Karanja describing that meat like it was a fine woman so he must have some serious skills. He should reverse the trend and get a visa to China with his essential skills.

This guy had done nothing wrong he is selling Hotdogs

Folks in that part of country will eat anything that comes their way. They ain’t the sharpest in the block.

They eat horses, donkeys, elephants, monkeys, apples, cheetah, cats, etc. Most people in the region are still quite backward. They call waru mugate wa mbofuru. Most people have never been past grade 4. So they are easily deceived by visiting politicians and other locals. The men in that place wear nginyira type Sandler made out of old car tires. They still wear home made khaki short trousers and a leopard skin top.

Most of them have never traveled past Engineer Town. When travel on horse buggies to a town called Naivasha, someone have to hold their hands to help them cross the streets.

They think Naivasha is the new Jerusalem that God had promised Moses of the old. They prefer going to some woods in Ndondori forest because it’s easier for them to traverse.

So it is understand when a local feeds them dog meat samosas.