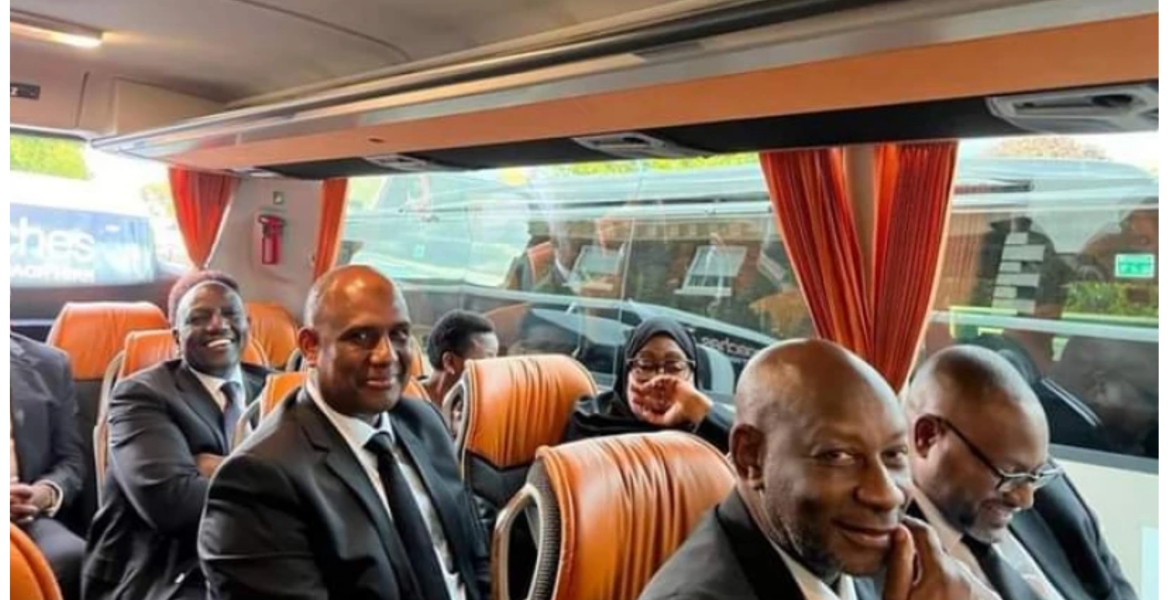 President Ruto on Monday boarded a bus to Westminster Abbey in London, where the funeral of Her Majesty Queen Elizabeth II is taking place.

Ruto, who traveled to the U.K on Sunday to attend the late queen’s burial, was seen seated next to his wife Rachel in the shared transport on Monday morning.

Tanzania President Samia Suluhu was also seen on the seat in front of Ruto’s alongside other African dignitaries attending the funeral.

The State funeral is being attended by close to 2,000 people, including 500 dignitaries from Europe and leaders of Commonwealth nations. Most guests attending the State funeral were required to use shared transport.

Reports indicate that United States President Joe Biden is among the few leaders who have been allowed to use their helicopter in London.

Heads of State attending the funeral were asked to travel by commercial flights to avoid putting too much strain on London’s airports.

Queen Elizabeth II, who died on September 8th aged 96, will be buried next to her late husband Prince Philip in the King George VI Memorial Chapel.

After the funeral, Ruto is scheduled to travel to the U.S to join other world leaders for the 77th Session of the United Nations General Assembly in New York. Kenya will address the assembly on Wednesday.

Kwani you wanted them to fly and land at the burial site? Aii... WSR was even ready to take a wheelbarrow coz ones he decided it's going, he goes whole-heartedly.

This is the most shameful event the Kenya government has been involved in 2022.

Tanzanian President appears shocked what were they expecting to land their copters in London.When you all descend there like roaches that is how you get treated.Yes you are the elite at home but to these colonizers they are showing you what they really think of you.Yes Kenyan tax payers you are paying for your new president to ride the bus.

Why all African leaders were bused together? Just asking

Me too @Bmore, asking- why all blacks sitting at the back of the bus? Even Rosa Parks said, hell no!

Queen Elizabeth's Stolen "The Great Star of Africa" Diamond From South Africa Is Worth $400M........
https://www.youtube.com/watch?v=hpsJN-GiC9w&ab_channel=AfricanDiasporaN…

Your pocket/wealth dictate how the circle of people treats you!!....African leaders are 2nd class citizens at this function which has been overwhelmingly over rated!!..

Disgusting. These idiots when will they rise to the occasion? When will they wake up? How can Africa rise & rise with such colonized minds? Time to cut the cord.

Good lessons for them so that when they come back home, they should raise the interests of their citizenry first, before puting mzungu or mwarabu ahead of their own people. Like the case of Saudi Arabia, though those ones are not white, but still....Our leaders are so numb you won't hear them castigate the Arabs, indicating they don't care about the same people who finances their lavish lives.

Good job wazungu for putting these sheep together in one wagon.

was it a must heads of state to attend? their personal preference..no special treatment all equally wont be shocked they did not allow their security team. Angetua PS..Back you waste lots of resources with convoys of security...if you followed keenly only 3 cars zimetosha for presidential escort