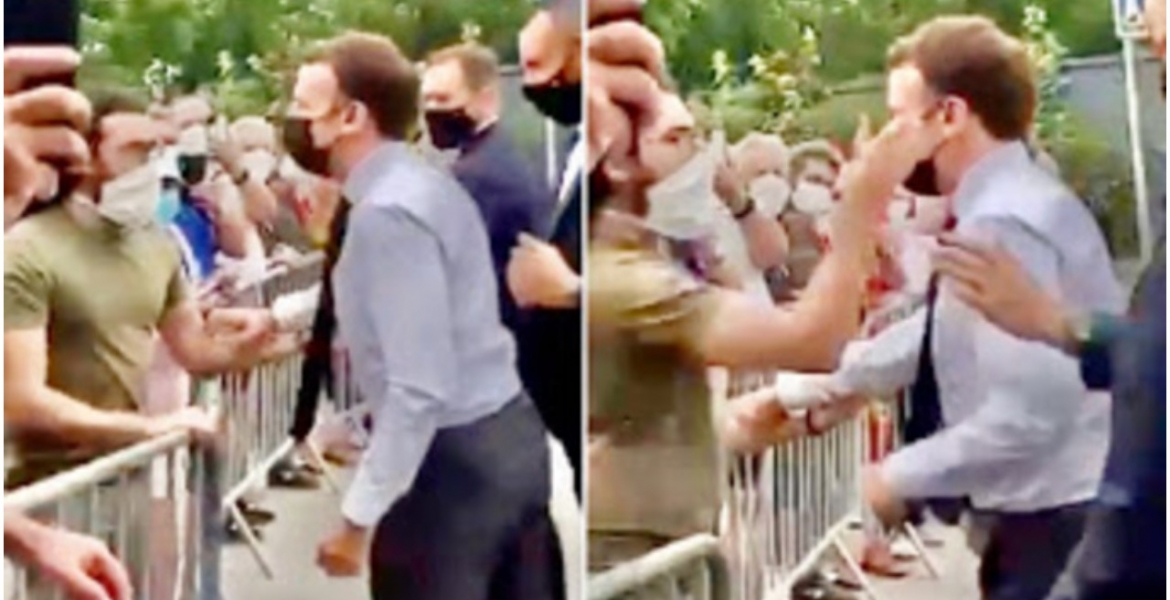 Two people were arrested after French President Emmanuel Macron was slapped by a man in the crowd.

A video clip published by French media shows a man in a green T-shirt, eyeglasses, and a facemask shouting "Down with Macronia" before slapping Macron in the face.

Macron had visited the Drome region to meet restaurateurs and students to talk about how life is returning to normal as the COVID lockdown eases.

In the video, he is seen walking towards a crowd standing behind a metal barrier before reaching out his hand to greet the individual, who then hit him in the face.

The president’s security team responded swiftly to pull the man to the ground and move Macron away.

The suspect was arrested alongside another individual for questioning, according to the regional prefecture.

Last year, Macron and his wife Brigitte were verbally abused by protesters as they took an impromptu walk through the Tuileries gardens in central Paris.

Macron, who is expected to seek re-election next year, is keen to meet voters in person as the country tries to recover from the COVID-19 pandemic. Polls show that Macron enjoys a slim lead over far-right leader Marine Le Pen.

Wish someone laid five fingers on 45. Every African president needs a slap in the face.

SAME AS FEMINIST DO THINKING NO REPERCUSSIONS FOR THEIR DEEDS

Kenya has a illegitimate president thanks to people like Macron.

Do not touch God's anointed even if hes a dictator like Kagame or M7. Their time to exit will come

In theae times, violence is the only way out...PERIOD...
I said it before the bible ain't working..
The BULLET will always work.

That was so rude and disrespectful!, Citizens should respect their leaders and the best thing to do is to vote them out if you think that they are not doing the right thing!. That's why we have Democracy!. Now he face charges and threaten his job !