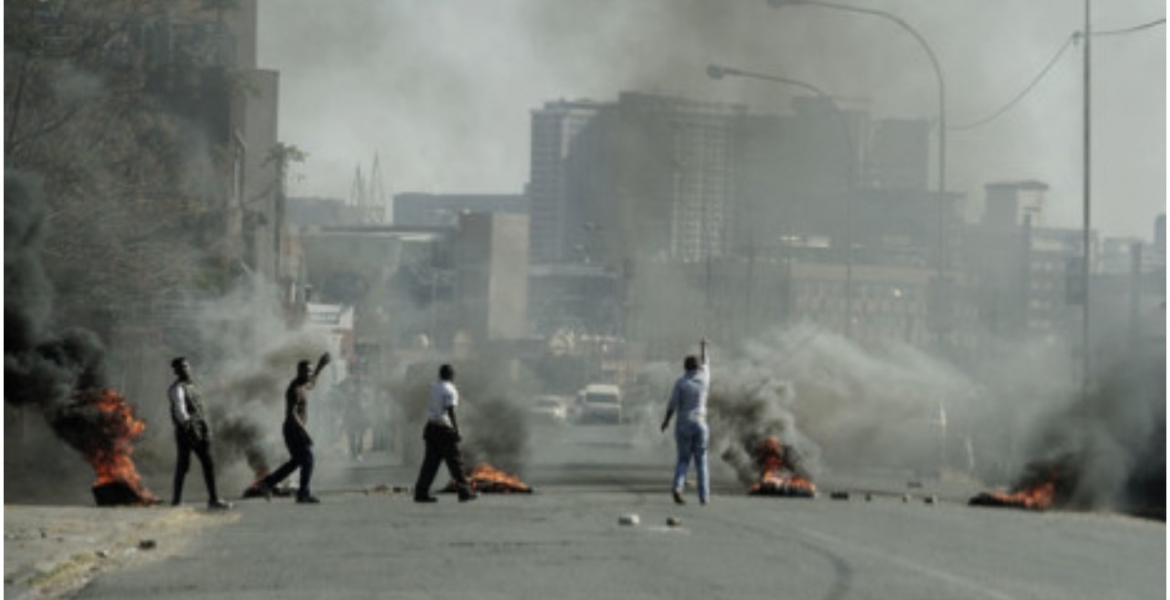 The South African government has deployed the military on the streets to stop the violence that broke out following the incarceration of former president Jacob Zuma.

The unrest began in his home province of KwaZulu-Natal and has spread to Johannesburg, the biggest city and capital of Gauteng province.

Pro-Zuma protestors poured to the streets after the 79-year-old handed himself to authorities on Wednesday to begin a 15-month sentence handed to him by the constitutional court over contempt of court.

At least 200 people have been arrested in KwaZulu-Natal and Johannesburg even as Zuma challenged his prison term in the country’s highest court.

The protests have degenerated into looting and arson with smoke from burning buildings swirling in the air. Police said criminals are taking advantage of the demonstrations to steal and cause destruction.

On Sunday, President Cyril Ramaphosa said the violence was derailing efforts to rebuild the economy after the COVID-19 pandemic.

Zuma, who is being detained at Estcourt Correctional Centre, was sentenced to 15 months in jail after he was found guilty of contempt after disobeying the court’s order requiring him to appear at an inquiry into corruption.

His period in power between 2009 and 2018 was dogged by graft allegations where prominent businessmen were accused of conspiring with political leaders to influence the decision-making process.

Zuma, who resigned in February 2018, made one appearance at the inquiry in 2019 but skipped subsequent proceedings. This prompted the inquiry, which is headed by Justice Raymond Zondo, to seek the intervention of the country’s highest court.

He is also fighting a corruption case relating to a $2 billion arms deal in 1999 when he was deputy president.

Stupid Stupid Idiots brainwashed Blacks Africans.When this guy was stealing he did so for his wives n children not for the tribe??I always state black man is kinda cursed?Destroy yr cities the way Jaluos do when tails loose elections.U steal u pay back n get arrested or get hanged period???Ramaposa another thief should not set this thief free?Let the idiots continue to burn the city they t the ones to continue dying without food/Jobs.Silly stupid cursed black man.Useless

This country has gone downhill since 1994

There is no rhyme or reason to what these looters are doing.If Juma broke the law,he should be punished.What excuse is there for the law not to be applied? "Africans" we have along way to go democratically.Our politics are driven by our tribal lineage, to the detriment of disobeying,and disregarding laws of the land.We are all familiar with these attitudes in our own Kenya.Needless to go into specifics.They are abound.
These are the kind of issues AU should be seriously paying attention to,instead of just gives lip service,if at all they mention.The peace we forge will always be fragile if we do not solidify the basic foundations that harness us together as a people.And it starts with our leaders.

THIS IS THE SAME CRAP KENYANS DO.
GOONS ARE PAID TO DESTROY PROPERTY AND CAUSE CHAOS.
ZUMA HAPPENS TO BE THE MOST CORRUPT SOUTH AFRICAN PRESIDENT EVER.
BUT AS AFRICANS WE PORTRAY POLITICIANS AND PEOPLE WITH MONEY LIKE DEMIGODS.
IT'S TIME TO END THIS MENTAL ENSLAVEMENT.

How can muuaji Raila supporters criticize the violent Zulu,a.k.a,SA Jaluos?Muuaji Raila steals from and kills Kenyans including the fools who volunteer to die for him to rule.He then joins thugs Kibaki and/or Uhuru in EATING shs 730b.per year.Zuma stole from the same people including the 60 volunteers who have been killed for him to gain freedom.UJINGA GANI HUU-UKIWA JWA KABURI,ZUMA ANAMEZA MABILLIONI NA WATOTO WAKE,MATITI ZAKE.