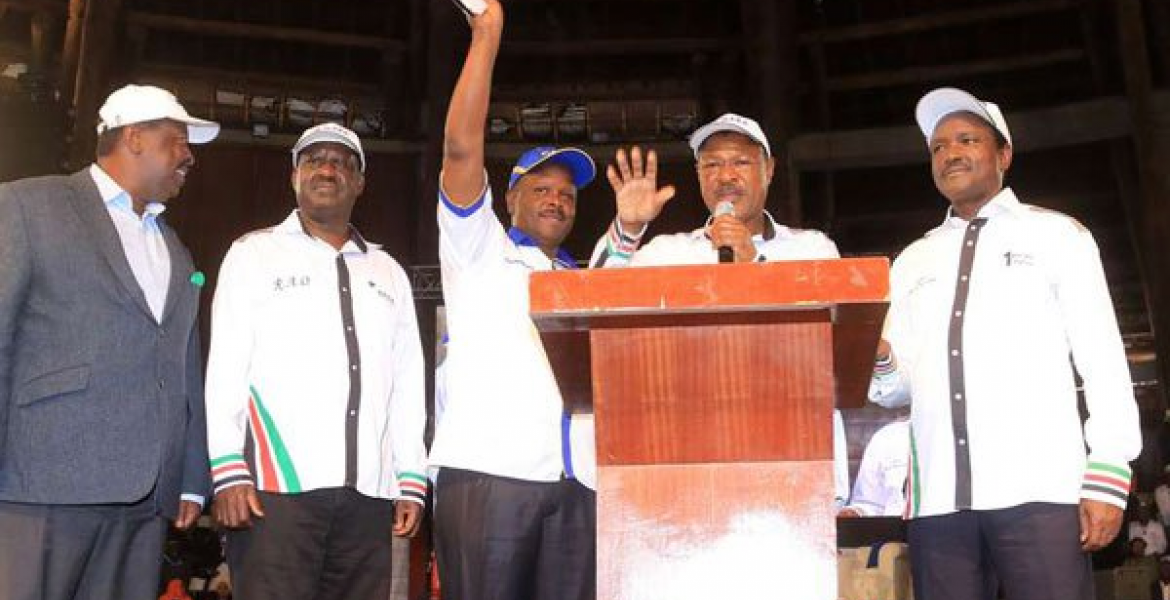 The National Super Alliance (NASA) has warned Jubilee that their attempts to divide the Western region will hit a hard rock, as Western was solidly behind Raila Odinga’s candidature.

The opposition leaders said that Jubilee has been working to ensure that the Luhya community does not vote as a bloc in the August 8 elections, after fears that they will lose to the opposition.

Wetangula accused the three of joining Jubilee in order to enrich themselves at the expense of Luhya community interests.

The senator said that told Jubilee to prepare for a rude shock, as for the first time in history, Western Kenya will solidly back one presidential candidate.

"Do not stay at home and hope Raila will win without your vote. Come out in large numbers and vote to guarantee us victory," said Wetang'ula. "I sympathize with MPs from Western who have been cheated to join Jubilee because their days are numbered," he added.

Raila and Kalonzo dismissed projects launched by the Jubilee government in western Kenya, saying that they had either not taken off, or were Grand Coalition government’s brainchild.

"Most of the projects that Jubilee launched in Western have not taken off. This government does not mean well for the region," Kalonzo said.

"Recently, Uhuru came here to commission Sigiri Bridge, which was my brainchild. He is the one who refused to release the money when he was serving as Finance minister," Raila Said.

Raila does not have the ability to lead the country in a peaceful manner.His Political history is tainted with the death of many innocent Kenyans.Innocent people who lost their lives because of Raila's insatiable greed for power.I mean, to this day he has never said he would concede defeat when he gets defeated.Some of his lieutenants have been saying for the last six months that they won't even go to the supreme court if defeated.Most Kenyans know that they cannot trust the ship of state in the hands of Raila. His divisive ways would inevitably lead the country to chaos.That is why I think all Kenyan tribes including Luhya's are going to continue to be attracted by UHURUTO. We all need peace and civil order in Kenya.Our entire lives and the lives of our loved ones depend on that peace.The Jubilee Party stands for Peace and Development for all Kenyans.

Kim. Did Raila go to the ICC? He did not; and it's because:
1. He was the victim
2. He was NOT involved in the Violence
3. He humbled himself for a Coalition Government
4. He is a Loving and Patient person
5. He is a Forgiving Person
6. He is Non-Tribal and said "Kibaki Tosha"
7. So he is a Uniter (uniting Western Kenya and the Whole Country)
8. His Sacrifice Removed KANU
9. He fought for 2nd Liberation
He fought for the New Constition
9. The NEW Infrustructure is because of him as Roads Minister and Prime Minister.
10. He is a Trillionaire and so does NOT need to Steal Taxpayer'sMoney or Land
11. He is a WINNER (2007, 2013, 2017, and 2022)
12. He is ANOINTED by God and for God for President of Kenya For as Time as This. Amen!!!

Who can muuaji RAO spare if he forced Castro,his own son to swallow a bottle of methanol to death for insisting he wanted his former Gikuyu wife back?Watu kama GUEST1 ni makashia tu kwa Raila.I challenge him to attempt going near him AONANE na HOODED

OMERA. You are a LIAR of INSANE Mega Imaginations. How can you AUDACIOUSLY say that Raila forced his son..... Ok never will I ever read your comment; you make up things.

The National Super Alliance (NASA) has warned Jubilee that their attempts to divide the Western region will hit a hard rock, as Western was solidly behind Raila Odinga’s candidature.
A presidential candidate has the right to campaign anywhere in the country to seek votes, and Raila seems to full himself that everyone in the region wants to vote for him, he should let the people decide who they want, additionally I may be missing something because all am hearing is how NASA has plugged the holes so there will be no rigging, but I yet have to hear what NASA plans of doing for the people, we know Railas history based on his time in office as PM, also as MP for Kibira, if this is his resume, then those planning to vote NASA have a rude of wakening, at least we have seen UhuruRuto's progress card, it may not be an A+ but Railas to me looks more like an F- based on prior performance.

Jubilee RIGGING is the ONLY Rude Awakening to NASA; and NASA WINNING is one of the Rude Awakenings to Jubilee. And Raila is Headed to State House. You WATCH.

Luhya should not vote as one block.why should they? they are not monolithic. Jubilee should espouse their ideas, promises,and hopes to any tribe in Kenya just like any opposition should,and after that, let each individual vote their conscience.We are many tribes,but one KENYA.United we stand.